A look inside UMD’s innovative BookLab 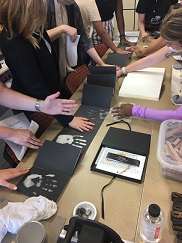 A Saturday afternoon during finals week at the University of Maryland, College Park. Outside, it already feels like vacation. Inside, in a converted classroom on the third floor of Tawes Hall, the air is filled with soft sounds: the swoosh-scrape of a paper cutter; the gentle rumble of a Gutenberg-style screw press; the click of metal type falling into place amongst its kindred in a composing stick; the scratch of a pen against a ruler; the whir of the fan.

Students in a class devoted to the history and material forms of the book are in the final push on their semester projects. Despite the availability of a term paper as an option, every one of them has instead chosen to make a unique book object of some kind.

Both the class and the space are called BookLab. Opened in September 2018, BookLab is the English department’s dedicated facility for the study and appreciation of what is surely its most iconic object, the codex book.

BookLab is part makerspace, part studio, and part library. It has three tabletop presses for traditional letterpress printing, a growing collection of wood and metal type, tools for bookbinding and papermaking, block printing, a 3D printer, a Remington typewriter, and more.

It aims to be respectful to the traditional book arts, but it is not a nostalgic enterprise. Here, students might use centuries-old techniques to hand-set type and impress metal into dampened paper, but they might also 3D print a block image or ornament and use that in the presses, or attach a motion sensor to a book so that it tweets at you every time it is opened.

As reported in various media outlets, the English major at Maryland has declined in numbers by more than 50 percent since 2008, which is more or less in keeping with enrollments in humanities disciplines elsewhere. Letterpress printing and bookmaking won’t single-handedly reverse that decline. But they do bring English into a campus-wide constellation of makerspaces that support the university’s emphasis on innovation, creativity, and hands-on learning, while also externalizing the identity of the department in some unusually visible and tangible ways.

Although a major in English normally conjures images of solitary reading under trees or pecking away at research papers in the library, BookLab is a communal and convivial space, a destination within the department that is filled with fascinating tools and objects. It’s also part of a larger national trend: The English departments at Northeastern, Auburn University, Santa Cruz, and Rutgers, among others, are sponsoring similar initiatives.

To misquote Gertrude Stein, the book is still very much here.

[Photo: Students in Professor Kirschenbaum's BookLab course with To You, an artist's book printed with thermochromic ink that reveals its text when the pages are warmed by the heat of their hands. Photo by Matthew Kirschenbaum.]

Matthew Kirschenbaum is professor of English and digital studies at the University of Maryland; with Professor Kari Kraus, he is co-founder of BookLab. To learn more about BookLab, including public events and programming, follow it on Twitter and Instagram, or stop by for a visit during the semester in Tawes Hall, room 3248.

A popular Florida book fair’s in-person events are over, but the fun continues online.