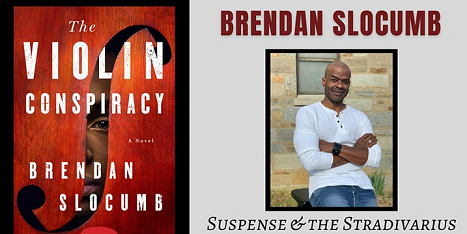 The first violin part of Dvořák’s 8th Symphony is, academically speaking, gnarly. Like the big waves that surfers ride on the West Coast, the Czech composer’s notes rise into the stratosphere and demand fear and respect — and lots and lots of practice. Even with that practice, I struggled.

A few years ago, I played with the Annandale Symphony Orchestra (now the NOVA Symphony Orchestra) and Concertmaster Brendan Slocumb. You may have heard of him: His debut thriller, The Violin Conspiracy, came out earlier this month after taking all the “most anticipated” lists by storm.

In rehearsals, Brendan never told me (you know, literally the manager of a book festival) that he was writing a novel. Instead, we tirelessly plowed through page after page of intimidating Dvořák runs, joking all the while.

I wanted to hide in the back of the violin section, sawing away and missing my notes in relative peace, but Brendan shifted the seating each rehearsal, rotating us until I was (yikes!) in second chair, right beneath Maestro’s baton and right next to Brendan.

Despite the pressure, he made it fun. He’s demanding and accomplished but also silly when the hours tick on and the playing is exhausting. He’d rock out on hardcore downbeats and take us along for the ride, encouraging us to play and groove in our seats.

Never in my life have I played as well as I did under Brendan’s leadership, and I’m so grateful for his encouragement. Which is why I’m stoked to support him now. Remember that incredible novel of his I mentioned? When it appeared in a Publishers Weekly bulletin, I knew it represented a chance for Fall for the Book to do something different.

So, on February 24th, we’re breaking back into in-person programming with style by hosting a free conversation with Brendan Slocumb, along with a live string-ensemble performance. Brendan will be leading the musicians and playing along, while I manage the event (instead of toiling over my own instrument).

From his work as a music teacher and concertmaster to his new podcast, “How Music Can Save Your Life,” Brendan is inspiring. Author/ballerina Misty Copeland’s blurb of his novel hits home for me: “The Violin Conspiracy reminds all of us that dreams are worth pursuing, no matter the obstacles in front of us.” Dvořák was my rogue wave, and I managed to ride it thanks to Brendan’s guidance. I hope you’ll join us next week and be inspired by his music, wit, and writing, too.

[Editor's note: Brendan Slocumb will speak at the Gaithersburg Book Festival on May 21st in Gaithersburg, MD.]

Suzy Rigdon is festival manager of Fall for the Book at George Mason University.

A Triumph of the Debuts

The popular — and FREE — Montgomery County event is this Saturday, May 19th!