The pleasure of listening to Katherine Hall Page’s Small Plates. 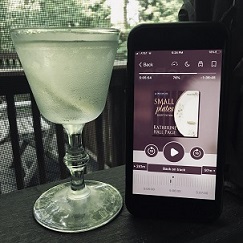 Over the past week, I’ve been listening to Small Plates, a 2014 short-story collection by mystery writer Katherine Hall Page — listening to it while on daily walks or while doing things around the house (pandemic routines, pandemic reads). To borrow a word from a character in the story “Across the Pond,” these tales are simply “scrumptious” — and audiobook narrator Tanya Eby is, I should add, terrific.

Page is best known for her novels, the Faith Fairchild mystery series, but she proves an exceptional storyteller in these tighter forms, too — though she admits in her introduction that she finds short stories more challenging to write. My favorite here is probably “The Would-Be Widower,” which won the Agatha Award back in 2001.

The set-up is fine and funny: A man imagines the bliss and pleasures awaiting him as a widower, but he has one stumbling block — his wife is very much alive. And while readers might likely pick up the clues that point toward the ending, it’s still a blissfully dark-humored joyride getting there — and the last lines deliver a final extra twist just for good measure.

But what I love best about the story — about all these stories — is Page’s prose, which is simply delicious.

I’m using food-themed words like “delicious” on purpose, in part keeping with the author’s own approaches. In her introduction, Page writes, “The title of the collection, Small Plates, refers not only to the length of these servings but also to the pleasure that ordering tapas, or two appetizers instead of an entrée, often provides. It is my hope that the tastes here will linger long on the palate.”

As with that extended metaphor, the title Small Plates also finds echoes in the subject matter of the stories — or at least the recurrent motifs, since most of them include some scene of eating or of food and drink.

Page’s series character, Faith Fairchild, is a caterer who shows up in several stories — most prominently in “Sliced,” where she’s a contestant in a cooking competition, a story which provides dramatic anecdotes from Faith’s past and her relationships with several chefs. Another story, “The Proof Is Always In the Pudding,” centers around a lavishly detailed Christmas dinner — and the Christmas dinner curse that’s shadowed Faith’s in-laws.

But even in stories not explicitly focused on cooking or eating, the pleasures of food and drink often rise to the top. along with Page’s own pleasure in writing about them, whether it’s a round of St. Germain cocktails and a trio of desserts (“mascarpone cheesecake, white-chocolate bread pudding, and a seasonal caramelized apple tart”) in “Across the Pond,” or a hearty plate of steak and Belgian frites for the pregnant main character of “Hiding Places,” or a key pair of casseroles served to the new widower in “A Perfect Maine Day” — as well as the casseroles anticipated by that would-be widower, too.

Page even shows delectable wit when the food itself is less than stellar, as with the menu at the conference resort in “The Body in the Dunes.” And just for extra clarification, that word “scrumptious” I quoted in the first paragraph refers not to Victorian sponge cake but to one character’s new fiancé. Romantic entanglements are a frequent motif in these stories, as well.

My Instagram page pairs books I’m reading with drinks — cocktails usually, though coffee or tea other times. While I don’t have any St. Germain in the house right now (Page includes recipes at the end), martinis are mentioned in a couple of her stories too, so I was good for my pairing plans — though listening to the book on the same phone I usually use for photos required an extra step.

The title Small Plates and all the food motifs, my own Instagramming the cocktails there — those combinations and connections nudged me toward a bit of self-reflection about my own fiction and my own recurrent motifs.

For several years, I batted around the idea of writing a series of short stories crafted around specific cocktails, but it was only when gathering stories for my new collection that I realized I’d — inadvertently — been doing that already in my work. Mojitos figure prominently in my story “The Care and Feeding of Houseplants.” The gimlet provides a pivotal motif in “The Odds Are Against Us.” A Manhattan plays a key role in “A Necessary Ingredient.” And one of my own concoctions, a Midnight Tryst, appears in a newer story, “Better Days,” which you can currently read here for free.

I hadn’t set out to include all those cocktails in my stories. Somehow, it just…happened.

It’s an obvious point maybe, but whatever our intentions, our writing reveals what we appreciate, what we pay attention to.

Clearly, Katherine Hall Page appreciates good food and pays attention to the ingredients of a fine dining experience — it’s long been a hallmark of her work. And to bring in a local angle, Page’s own cookbook, Have Faith in Your Kitchen, was published by Alexandria-based Orchises Press, run by Roger Lathbury, professor emeritus at George Mason University, a former colleague of mine. (Small plates — and a small world, too.)

Whether you pick up Page’s masterful story collection or one of her Faith Fairchild novels — or reach out to Orchises for that cookbook! — know this: You’re in for tasty experiences, and your appetite is sure to be satisfied.

Art Taylor is the author of the story collection The Boy Detective & The Summer of ’74 and Other Tales of Suspense and of the novel in stories On the Road with Del & Louise, winner of the Agatha Award for Best First Novel. He won the 2019 Edgar Award for Best Short Story for “English 398: Fiction Workshop,” originally published in Ellery Queen’s Mystery Magazine, and he has won three additional Agatha Awards, an Anthony Award, three Macavity Awards, and three consecutive Derringer Awards for his short fiction. He is an associate professor of English at George Mason University.

Find your next excellent read at the library!

Or, when you figure out all your characters have blue eyes and drink whiskey.