Serendipity leads to a poetic discovery. 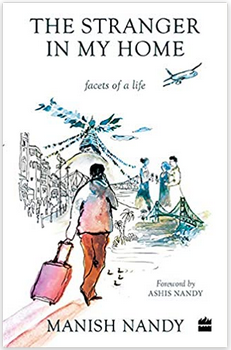 A couple of years ago, my husband, Ben, and I went on a day trip with a group to the Lost Creek Winery in Virginia. We stood under trees and listened as the vineyard owners explained how they carefully tended and cultivated their crop throughout the seasons. We tasted their wines paired with delicious courses, met interesting people, and enjoyed some lively conversations. But it wasn't until we left that I made a memorable connection.

As we boarded the bus for our return home, Ben was telling our host about my poetry podcast, and our host suggested I talk to the man sitting directly in front of us. "He has written a book."

His name was Manish Nandy. Ben graciously exchanged seats with him, and I found myself face-to-face with a distinguished Indian man a decade or so older than myself, dressed in a crisp cream shirt. He had a gentle, intelligent, and discerning expression. I felt immediately at home with him and interested in anything he had to say.

His book was called The Stranger in My Home. The stranger, he explained, was himself. People think they know themselves, he told me, but actually we can always surprise ourselves. And our chance encounters have the capacity to bring out something new in us, something unexpected.

By way of example, he recounted one of the stories from his book which involved an exchange with a waiter on a boat that had been converted into a fish restaurant in Abu Dhabi. It was delightful.

After hearing it, I told Manish about my poetry podcast, which has many listeners in India. In fact, the following week, I intended to record a selection from Gitanjali by the great Bengali writer Rabindranath Tagore, requested by one of my listeners. Our conversation moved from Tagore to John Donne to poetry recitation in general, and before we knew it, we arrived at our destination.

Manish and I parted with a sense of awe at our serendipitous connection. I promised to send him the Tagore translation I planned to read for my podcast. We then had a fascinating email exchange culminating in his sending me his own translation of the Tagore selection, along with the original Bengali poem.

I shared this with my friend Ananya, who is also a Bengali speaker, and it led to more fascinating discoveries. Since a full explanation is a bit too complicated to go into, let me also add that I ordered Manish's book. It arrived a few days later, and I was instantly captivated by its charm and poignancy.

One of its stories that touched my heart is entitled "Somebody Waited." It's about a man who, without explanation, left a woman he deeply loved. He had a few other fleeting relationships later, but none with the resonance of this abandoned one. Some years later, while on his way to Madrid, the man suddenly realized a painful truth: Nobody else had cared what he did or where he was. Certainly, nobody had cared like this woman.

So, on a whim, he decided to contact his long-lost love. He told her that since leaving her, his life had been a waste. He had accomplished nothing and made no real difference to anybody. She begged him to cut his travels short and visit her instead. She pleaded with him not to take his flight to Spain.

But the man was a fraud. After putting down the phone, he decided he would not go to her. Instead, he shamefully allowed her to wait for him indefinitely. "It was enough for me that somebody was waiting for me," he said. "I could go on and leave her in peace."

In another story, Manish writes about Auden and Yeats:

"Do what Yeats did. Sing of human unsuccess/ in a rapture of distress. Sing of your sorrow, write of your misery, but do it with verve and spirit, without shame and apology, know it to be a shared story of the human lot. And let others join in."

During the pandemic, when we’ve all been stuck in our homes, many of us have had time to consider our shared human lot in new ways and to look more deeply at ourselves. Who will we be when we come out of this? What have we uncovered about the “strangers in our home” — namely, ourselves?

Manish and I have remained in touch and have since had many more conversations about literature and life. The Stranger in My Home is full of sorrow and lost opportunity, but it's also full of joy, and because it’s a story of human experience, it has the potential to accompany, comfort, and enlighten all who read it.