Consider these revelatory reads for the history lover on your list. 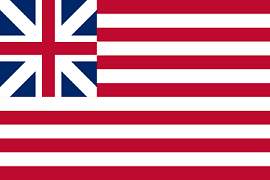 Given the approaching 250th anniversary of America’s founding, the pace of Revolutionary War scholarship and book publishing is quickening. During 2020, over 135 new books on the rebellion came on the market. The lives of the Founders represent almost a third of them.

Similar to past years, George Washington biographies led the way, with 11 new accounts of his life, including the cheeky You Never Forget Your First: A Biography of George Washington by Alexis Coe. The 2020 additions append to the over 1,000 biographies of Washington written since his death. Books highlighting the accomplishments of Continental Army generals represent the second-largest subject, with 10 first editions published in 2020.

Along with these top subjects, the contributions of women are increasingly — if slowly — being highlighted. In a change from the past, this area of scholarship rotated from well-known figures such as Abigail Adams to other vital but relatively unknown women of the era. For example, the women who helped sustain the soldiers at Valley Forge are expertly chronicled in Following the Drum: Women at the Valley Forge Encampment by Nancy K. Loane.

And while the Broadway-induced popularity of Alexander Hamilton has peaked, publishers persistently tapped his star power by bringing four new Hamilton biographies to market. Thomas Jefferson, too, continues to inspire writers and readers; three new books dedicated to his life arrived this year.

Yet among the panoply of recent releases, the following five stand out for advancing scholarship, recounting under-reported or newly discovered stories, or providing fresh looks at oft-misunderstood subjects. 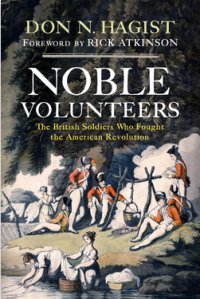 Noble Volunteers: The British Soldiers Who Fought the American Revolution by Don N. Hagist (Westholme Publishing). The preponderance of books on the Revolution are written from an “American Patriot” or Rebel perspective. As a result, historians regularly repeat misleading myths about British soldiers acting as rapacious and brutal “bloody-backs” or “lobsters.” Through years of detailed research of regimental muster rolls and orderly books, Don N. Hagist dispels these myths. First, a substantial percentage of soldiers in the British Army were not British but hailed from other parts of Europe and the Americas. Hagist provides another myth-busting clarification: British soldiers were predominantly literate and often read classical literature for recreation. Further, his book demonstrates that the Brits fought valiantly for the cause they espoused, and the experiences of British soldiers are just as interesting as those of the Continental Army. 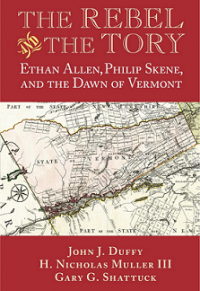 The Rebel and the Tory: Ethan Allen, Philip Skene, and the Dawn of Vermont by John J. Duffy, H. Nicholas Muller III, and Gary G. Shattuck (VHS Publications). Most primary sources on the War for Independence have been thoroughly researched, and it’s rare to discover new documents. This is exactly what the authors here have accomplished. They uncovered legal documents in musty New York archives that hadn’t been read in over 200 years. These scrolled documents pertain to the pre-war activities of Ethan Allen, the famed conqueror of Ft. Ticonderoga in 1775, and radically change the generally accepted view of Allen as a heroic defender of small farmers’ interests to that of a merely incompetent land speculator. Further, the three historians’ research highlights the efforts of a large landowner, Philip Skene, along with British General Jeffrey Amherst and Allen, to carve a portion of northern New York and modern-day Vermont into a 14th colony during the years leading up to the Revolution. This book sheds a completely different light on the character and contributions of Allen, Vermont’s fabled Green Mountain Boy. 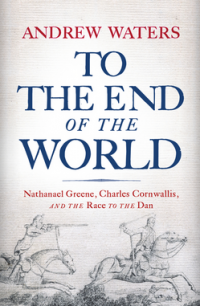 To the End of the World: Nathanael Greene, Charles Cornwallis, and the Race to the Dan by Andrew Waters (Westholme Publishing). In 1780, the Rebel cause in the Southern theater appeared bleak. After a series of disastrous defeats, Maj. Gen. Nathanael Greene assumed command of the remnants of the Continental Army and a few militia units. He faced British General Charles Cornwallis, who led a formidable, well-supplied army. Greene devised one of the most innovative and clever military strategies in the history of warfare. He rapidly retreated in the face of the superior enemy, thereby enticing his opponent into an exhausting march through inhospitable northern North Carolina. Now known as the “race to Dan” River, the gambit allowed Greene to bide his time and drain his foe while gathering reinforcements. Execution of this strategy led to Cornwallis’ defeat at Yorktown, the return of the Southern states to Rebel control, and the end of the war. A page-turner, Waters’ book cogently recounts a series of near-miss escapes and demonstrates that for a few vital hours, the Rebel cause in the South could’ve been lost. Both historians and lay readers will palpably feel the tension of this seminal campaign. First Principles: What America's Founders Learned from the Greeks and Romans and How That Shaped Our Country by Thomas E. Ricks (Harper). Too often, historians portray the Founders’ philosophies, principles, and politics as having arrived fully formed, with no background on their development. Ricks rectifies this lack of foundation by investigating the influence of ancient history and philosophy on Revolutionary-era politicians. While Washington was self-taught, Adams, Jefferson, and Madison received the benefits of classics-based college educations. Previously, most historians emphasized the influences of Enlightment thinkers on the Founders, including John Locke’s “life, liberty and property” and Montesquieu’s concept of happiness. However, Ricks demonstrates that the Founders were more influenced by philosophers such as Aristotle, Epicurus, and Cato. Given its vast departure from previous interpretations, this approachable, engaging book sheds new light on the thinking and justifications behind the Founders’ actions and the government they constructed. 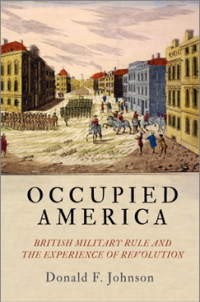 Occupied America: British Military Rule and the Experience of Revolution by Donald F. Johnson (University of Pennsylvania Press). There are numerous accounts of life for noncombatants during the rebellion itself. However, Johnson’s book provides the first account of American civilians’ pre-war experience under British military rule. He posits that poor leadership and frequent miscalculations did more to turn citizens against the Brits than did “taxation without representation.” The author describes British military administration in New York, Philadelphia, Charlestown, and other areas. Only in Georgia did the British have a short-term measure of success in reestablishing a civilian government loyal to the Crown. Other locations operated as extended military camps in which civilians were neither given rights nor a voice in politics. He cites this lack of a loyal civilian government as a major reason for the ultimate failure of the British to put down the rebellion.

Historical fiction is flourishing, and its advantages are many. For readers, it combines the familiar with the unknown, as novelists imagine the motivations and thoughts of historical figures. For writers, it provides grounding. Certain characters are already known and even defined. Better yet, the real world produces the most improbable characters. What fiction writer would dare create a character so complex and powerful as Abraham Lincoln? Yet historical fiction comes in many flavors. Here, for starters, are eight: