On the Fourth of July, light a sparkler and enjoy some books that all say “USA”! 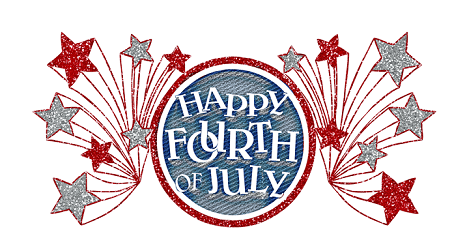 Winesburg, Ohio by Sherwood Anderson. Nearly 100 years old, this book’s timeless themes — encompassing what feels like the whole of the human condition in small-town America — resonate yet today.

Song of Solomon by Toni Morrison. Following the life of Milkman, this well-known novel surveys nearly a century of American history as he searches for his own.

Moby-Dick by Herman Melville. This story of obsession, brotherhood, adventure, and whaling, almost all of which takes place on board a ship, is universal in its portrayal of humanity.

The Scarlet Letter by Nathaniel Hawthorne. Set in Puritan Massachusetts, this novel deals with sin, revenge, hypocrisy, guilt, and survival as seen in the lives of wonderfully presented characters.

Uncle Tom’s Cabin by Harriet Beecher Stowe. This novel, which portrays the evils of slavery, was one of the most popular books of its day. Even if Lincoln never did call the author “the little lady who started this great war,” and some of the characterizations have been severely criticized, it is an important document, as well as a compelling story.

The Country of the Pointed Firs by Sarah Orne Jewett. Wonderful vignettes of the residents of a fishing village in Maine — charm without condescension.

Absalom, Absalom! by William Faulkner. This masterpiece tackles the rise of a Southern family as seen from different points of view.

The Day of the Locust by Nathanael West. A look at the lure of Hollywood and the madness it inspires.

The House of Mirth by Edith Wharton. The story of a woman trying to cope with New York society during the Gilded Age, without the strength or means to do so for long.

The Great Gatsby by F. Scott Fitzgerald. The great novel of the Jazz Age.

The Grapes of Wrath by John Steinbeck. Set against a backdrop of the Depression-era Dust Bowl, this story follows one impoverished family struggling to reach California — and hopefully a better life.

The Good Lord Bird by James McBride. A young boy, enslaved, falls in with John Brown and learns to find himself during the contentious years leading up to the Civil War.

Winter’s Bone by Daniel Woodrell. A young girl searches for her father in her meth-ravaged, poverty-stricken yet beautiful community in the Ozarks.

An American Marriage by Tayari Jones. A nuanced account of justice (or injustice) in America, and how it impacts a young Black couple.

My Antonia by Willa Cather. A lyrical expedition into the life-on-the-frontier experience, with a slice of the immigrant experience added in.

The Gilded Age by Mark Twain and Charles Dudley Warner. The original Washington novel. It has a few rough patches, but the send-up of Washington figures, and American society generally, hasn’t been topped.

American Pastoral by Philip Roth. A powerful exploration of how American assimilation can hollow out as much as it fills in.

The Killer Angels by Michael Shaara. The Civil War remains the fulcrum of American history, a brutal experience in confronting the original sin of slavery. This tells the story of that pivotal experience through the eyes of the soldiers — great and small — who fought.

Dusk and Other Stories by James Salter. Salter writes so beautifully that a reader just stops and smiles. He picks these amazing moments and brings the reader to the table.

Pudd’nhead Wilson by Mark Twain. Twain is the quintessential American writer. Everyone is represented in his work. Somewhere in some of his notes about this particular book, he said it started one way and finished another. One more thing, how could anyone not read a book about a slave named “Valet de Chambre”?

Devil in a Blue Dress by Walter Mosley. Easy Rawlins inhabits a world we all want to visit; thank goodness for books that take us to places where we can mess around and then go home.

Edge of Dark Water by Joe R. Lansdale. A trip downriver like Huckleberry Finn on the dark side of the moon. If you’re new to Joe Lansdale, you’ve very lucky!

The Emperor of Ocean Park by Stephen L. Carter. A romp through perhaps unfamiliar parts of Washington, DC. The story is set in the African-American upper middle class, where the main character sets out to uncover the secrets of his father’s death.

Ormond by Charles Brockden Brown. Brown is often referred to as the first American novelist, and this Gothic novel, which is set in post-revolutionary Philadelphia, engages readers with themes of murder, disease, seduction, and impersonation.

Linden Hills by Gloria Naylor. Naylor adapted Dante’s Inferno to construct a tale about class, race, and the true cost of achieving the American Dream.

Invisible Man by Ralph Ellison. A book that not only explores race and identity, but also reminds us of the wholeness of the human experience.

Kindred by Octavia Butler. A first-person account of a black woman who travels through time from California in 1976 to a plantation in Maryland in 1815.

The Son by Philipp Meyer. A sweeping, multi-generational tale of how the West wasn’t so much won as it was bought and paid for with blood.

We here at the Independent love every piece we run. There are no winners or losers. But all kidding aside, here are August’s winners.