Wanderlust mingles with mortality in this insightful new collection of essays 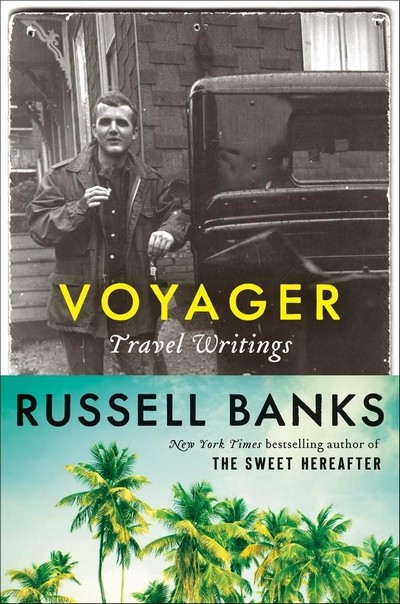 Book epigraphs in all genres, but travel writing especially, are fun — and something of a subgenre unto themselves. If done right, an epigraph can economically and gracefully frame the hundreds of pages to follow; or, as is the case of author Russell Banks’ collection of travel essays, Voyager, it can subtly linger, play it cool, and then, with the benefit of hindsight, wallop you over the head with a bone-chilling reminder of that one fact we all know but don’t like to think about: One day, you are going to die.

Specifically, Banks tees things off with a quote from Marguerite Yourcenar’s Memoirs of Hadrian: “As the voyager navigating among the isles of the Archipelago sees the luminous mist lift toward evening and slowly detects the outline of the shore, I begin to make out the profile of my death.”

Remove that tombstone of an epigraph, and Banks’ collection of 10 essays is a frolic through the comfortable terra firma of travel nonfiction — hopping islands, summiting mountains, driving cars, confusing us with a roster of future ex-wives.

But keep that lyrical death sentence of a passage in mind, and things get a little weightier. All of a sudden, as Banks refers to himself as an “aging [baby] boomer” on end, his stories feel less about adventure, less about checking items off the bucket list, and more about doing some things for the first time and, more importantly, for the final time.

This can be a nice change of pace from your meat-and-potatoes travelogues where the land is foreign, the people are exotic, the food is weird, and the future is bright. Just as there is an art to showing not telling, or being nostalgic but not sentimental, Banks does a remarkable job of making one-last-rodeo stories something other than depressing.

First, several essays flex a Joan Didion-like ability to give a sense of place and wanting. This comes through most of all in “Pilgrim’s Regress,” a story that exercises a triad of hippie catnip (road trips, drug use, and a college town) to take a look back on a time before “dreams started to fade” and “divorce and disillusionment and the steady dying began.” (The essay also begs the age old question, Did anyone do work in the ‘60s?)

Humor ensues when Banks is sent to Alaska on a magazine assignment to test-drive a new Humvee. Sure enough, the “giant steel jockstrap” becomes a metaphor for the modern American man — and lets Banks deliver a gem like, “You’re never lonely when you’re the only boy in Homer with a Hummer.” (Less so a barrel of laughs is the earlier essay “House of Slaves.”)

Other essays dabble in a potpourri of delights. Banks gives an oddly thorough description of Scottish weddings, and manages to find exoticness from extreme familiarity, in this hall of mirrors of Anglo-Saxony that’s “almost ghostly, seeing so many faces and bodies that resembled our own.”

He experiences pure bliss in the Seychelles (because that’s what one does in the Seychelles). He accelerates his prose in “Primal Dreams,” an ode to Florida’s Everglades (an underappreciated national park also knocking on death’s door). And he does something involving the Caribbean and former lovers in the namesake essay.

Father Time leans in most heavily in the three closing essays, “The Wrong Stuff,” “Fox and Whale, Priest and Angel,” and “Old Goat.” The troika of mountain-climbing stories spans the Andes and Himalayas and has the nice touch of describing mountaineering absent the pretension real climbers always seem to bring. Here, for an aging Banks, death and decay are more present than at any other time, and mortality sets in (spoiler: things end poorly for the man who hadn’t put himself “into condition for serious sustained athletic activity in decades”).

Sure, Banks might have set off to summit a South American volcano unprepared to the point of negligence, but as the kids these days would say, YOLO. Banks’ life of adventure isn’t done yet, but after he climbs closer to the heavens, we can all rest a little more in peace. (Also, pro tip: Viagra can help with altitude sickness.)

[Editor’s note: Russell Banks will read from Voyager this Tuesday, June 7, at 7 p.m., at Politics and Prose in Washington, DC. Click here for more info.]

J. Grigsby Crawford grew up in the Great American West and resides in the Mt. Pleasant neighborhood of Washington, DC. At age 25, he published his first book, The Gringo, and since then has professionally ghostwritten.