The Crisis of the Middle-Class Constitution: Why Economic Inequality Threatens Our Republic

A law professor warns of looming danger from financial imbalance. 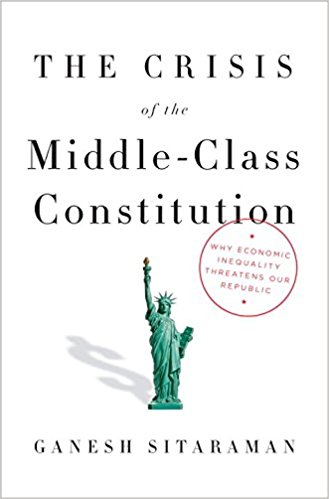 Law professor Ganesh Sitaraman opens this cri de coeur with the blunt warning that the collapse of the American middle class is the greatest present-day threat to the survival of our constitutional republic. The danger, he opines, outweighs the risks from the rise of presidential power, the growing national security state, persistent congressional dysfunction, or increased political polarization.

The country can survive with those other problems, according to Sitaraman, who now teaches at Vanderbilt Law School, but "it is much harder to have a functional constitutional republic without a strong middle class."

Economic inequality has been the Achilles heel of political systems from as far back as the ancient Greek democracies and the Roman republic. The ancients foresaw that such inequality led inevitably to political inequality and from there to instability, class warfare, and revolution.

The United States has been spared this vicious downward spiral, Sitaraman writes, not so much because of the genius of the Framers but more because of the country's good economic fortune at the founding. The United States was blessed with relative economic equality at its birth — though that happy state did not extend to women or slaves — and with abundant land to bestow on upward strivers.

America was thus spared the destabilizing inequalities of wealth that had beset European countries, with their landed aristocracies and impoverished peasantries. The Framers recognized economic equality as a safeguard of political liberty and somewhat broad suffrage as a guarantor of merit among the popularly elected representatives.

The present-day advocates of "original understanding" in constitutional elucidation might be surprised to learn that none of the delegates in Philadelphia would sympathize with Ayn Rand acolytes praising the virtues of economic inequality.

Political philosophers dating from the ancient Greek scholar Aristotle and the Florentine conniver Machiavelli all saw economic inequality as a danger and designed constitutional systems that guarded against abuses of power by setting economic classes against each other in what Sitaraman calls "class warfare constitutions."

The U.S. Constitution, written in Philadelphia, instead seeks to limit government powers by the tripartite separation of government institutions articulated by the French political philosopher Montesquieu. Thus, the Framers provided in Article I that "no titles of nobility" would be granted in the new republic and established no property qualifications for either chamber of Congress or any "office" of the United States.

Sitaraman, a former aide to the liberal Democratic senator Elizabeth Warren and currently a fellow with the liberal Center for American Progress, cites major American political figures through history as embracing the importance of economic equality to democracy. Daniel Webster warned as early as 1820 against the risks to democracy from "the rapid accumulation of property in a few hands." Americans, he predicted, "would never allow a government that undermined this equality."

Nearly a century later, the former president Theodore Roosevelt held forth to the same effect. "There can be no real political democracy," Roosevelt wrote in a review of Walter Lippmann's book Drift and Mastery, "unless there is something approaching an economic democracy."

The young journalist Lippmann and the ex-president Roosevelt were writing at the time against the backdrop of the late 19th-century rise of an American plutocracy in the so-called Gilded Age. Two decades earlier, in 1895, the Supreme Court justice Henry Brown had told a law school audience that the influence of wealth in America had never been "more powerful than it is now."

The developments spawned influential reform movements: the populist revolt, with its emphasis on controlling the depredations of corporations and trusts, and the progressive movement, with its efforts at improving politics and government through structural reforms.

Sitaraman cites present-day statistics to show that 21st-century America is roughly as unequal as it was in the rightly condemned Gilded Age. Like the economist Thomas Piketty, author of the influential book Capital in the Twenty-First Century, Sitaraman shows that inequality is greater than Americans realize and greater than Americans favor.

The decades-long trend of the rich getting richer and the middle class getting squeezed is bad for democracy, Sitaraman warns, and demands thoroughgoing reform in political and economic structures. His agenda will resonate with liberals and progressives: limiting the influence of money in political campaigns; controlling the power of lobbyists; reinvigorating labor unions; and rebuilding the middle class through progressive tax reform, higher wages and benefits, and affordable higher education.

Fear of private economic power has been more central to American history than the fear of government power so emphasized by present-day conservatives and libertarians, Sitaraman writes. With the middle class collapsing and power increasingly concentrated among economic elites, he closes with a centuries-old warning from no less a patriot than John Adams.

Is there "such a rage for Profit and Commerce," Adams asked in a letter to a friend in 1776, that Americans no longer have "public Virtue enough to support a Republic?" For Sitaraman, Adams' question is a challenge to present-day patriots to institute the reforms needed to preserve and reinvigorate our republican form of government.