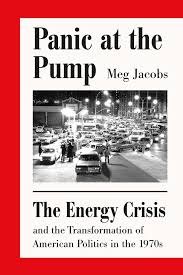 We tried to make it fun on a hot DC July afternoon. There was a good deli on MacArthur Boulevard on the way to the Exxon where we’d stop and buy sandwiches and potato chips and the largest vat of Coca-Cola they sold. Food and drink in hand, we’d get back in the car and drive about half a mile to join the growing line of station wagons, sedans, and pickup trucks.

Were we part of an Independence Day holiday parade? Hardly. Our license plate ended in an odd number, so my dad was allowed to wait in the discouraging queue that day in the hope of purchasing gasoline at the pump. Happy Fourth of July, 1979-style.

The 70s were a tough time in the land of the free. The Vietnam War and the presidency of Richard Nixon ended ignominiously in 1973 and 1974, respectively. Congressmen told us to put on red WIN (“Whip Inflation Now”) buttons to help combat double-digit price increases draining American’s purchasing power.

Plus, we were excruciatingly dependent on gasoline supply from Saudi Arabia and the Organization of Petroleum Exporting Countries (OPEC) to keep our cars and commerce moving. In 1973, those big oil producers cut the U.S. off for supporting Israel in the Yom Kippur War with Egypt. In 1979, Iran cut America off to protest allowing the shah to come here for medical treatment.

It’s easy to take for granted 2016’s dependable network of service stations with plentiful supply and even a decent convenience store now and then, too. Have you tried Wawa’s coffee lately? It’s a pretty good cup of joe. Heck, Waze can help you find the cheapest gas as you drive in an unfamiliar town.

It wasn’t always so.

Almost unimaginable today, Americans in 1973 and 1979 put locks on their gas tanks to prevent siphoning, endured rationing, protected their petroleum supply with rifles in hand, and, for several weeks in 1979, lived in a world where interstate truckers would shoot at others driving on highways for not honoring their strike to protest high prices and low supply.

In her new book, Panic at the Pump, Princeton professor Meg Jacobs makes a strong case that these twin energy shocks shook up the American psyche on the level of Watergate or Vietnam. They certainly damaged Nixon and President Carter. In fact, for most of the period when the Watergate scandal was unfolding, Americans were far more worried about tapping a gas pump than whatever Tricky Dick was taping in the Oval Office.

If Nixon was distracted, Carter was drubbed in 1979 by millions of angry citizens, politicians, and pundits decrying the decline of the West, none with greater dividends than Ronald Reagan. Where Carter told Americans to lower their thermostats and wear sweaters or think twice about that car trip, Reagan propelled his own presidential victory by saying government alone was causing the problem, not any boring old geopolitical issues.

As the crises ebbed, millions of citizens of the United States of Amnesia quickly forgot supply had ever been tight and resumed heavy, then heavier, then heavier still, oil consumption with SUVs and higher speed limits on highways. (Please feel free to legally tool across Nevada or Idaho at 80 mph if so inclined or put the pedal to the medal at 85 mph on a 41-mile stretch of toll road from San Antonio to Austin.)

In 2005, Americans drove almost three times the number of miles as they had 30 years earlier, according to Jacobs. Large gas-guzzling SUVs, exempt from CAFÉ gas saving standards, now account for about 25 percent of the domestic car market. Energy crisis? What energy crisis?

It wouldn’t be a bad idea for millions of Americans to listen to an audiobook version of Panic at the Pump as they drive around in stop-and-go traffic on roads more and more clogged with vehicles that get fewer and fewer miles per gallon. Would it help? Who knows?

As we enjoy today’s vast network of service stations with $2/gallon gasoline and pleasant amenities, who wants to worry about some ancient oil-supply bummers?

Michael Causey, a past president of Washington Independent Writers, has a 55-mile round trip to work. He tried really hard to use Metro.