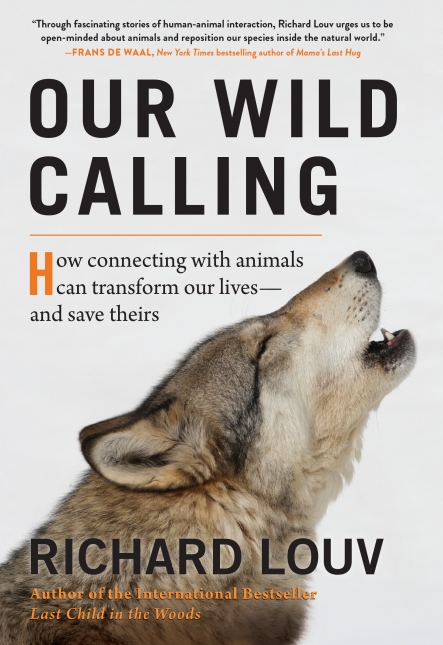 Richard Louv has a brief encounter with a black fox on Alaska’s Kodiak Island that leaves him awestruck. “We stared at each other for what seemed like minutes but was probably only seconds. In those eyes I felt a distant kinship or perhaps only the suns of a parallel universe.”

Louv is still wondering about that fox and what it thought. “Was I just another part of the landscape?”

The relationships humans form with animals, whether dogs or cats, horses or cattle, a bear or a wolf, present an array of mysteries which we are continually attempting to solve. What is it that draws us to these beings who are so different from, and yet so similar to, us? How are our lives intertwined, and what meaning does that connectedness hold for society as a whole?

In Our Wild Calling: How Connecting with Animals Can Transform Our Lives — and Save Theirs, Louv delves into this question and others, exploring the evolving relationship between humans and non-human animals, as well as our place in nature. Yes, we are all animals, but Louv takes us deeper.

“Though an encounter with any animal, wild or domestic, can sometimes be dangerous, our relationships with other-than-human beings can also have a profoundly positive impact on our health, our spirit, and our sense of inclusiveness in the world.”

And Louv, like many of us, is worried about climate change and how it will affect animals. Our Wild Calling is, in part, a call to action requiring “a journey into the habitat of the heart. By that, I mean that reversing or slowing biodiversity collapse and climate change cannot be accomplished solely through science, technology, or politics…Success will require a far larger constituency than what exists today, one with greater emotional and spiritual connection to the family of animals.”

Beginning with a discussion of the impact of technology on society, species loneliness, and the explosion in pet ownership, Our Wild Calling examines a wide range of topics. Through interviews and conversations with scientists and researchers, as well as his own personal experiences, Louv analyzes the interconnection between human and non-human animals; the similarities and differences in our biological and social structures; concepts such as critical anthropomorphism and soundscape ecology; how animals communicate with humans and with each other; and awakening what he calls “the seventh sense.”

Louv’s mission is for readers to realize the positive impact animals have on us, focusing on what humans can learn from animals and how a connection can be developed to make the world a better place. He describes the many roles animals play in our lives — companion, service animal, food — recounting a number of moving stories depicting the deep bond between people and their pets or the transformative experience brought by a chance meeting with an animal in the wild.

The author reminds us that humans once had an intimate relationship with both animals and the landscape and that, over time, we became separated, creating a deep loneliness. He contends that the only way to really care about and for animals is by spending time in nature and getting close to them.

Woven throughout the book is the looming issue of climate change and the threat of extinction. Louv doesn’t spend a lot of time discussing the Anthropocene, but he makes clear that we have a moral responsibility to other animals:

“Our coexistence with animals is essential to the survival of all species. Consequently, protecting our extended family is ultimately an issue of rights — the rights of human beings to a nature connection and the rights of nature itself.”

This book is for anyone interested in the profound interaction between animals and humans. Neatly divided into sections and brief chapters, Our Wild Calling reads like a series of short stories that merge into a bigger picture. This book covers a lot of territory, and the amount of information can feel overwhelming. Even with its heartwarming anecdotes and tinges of humor, it might be best appreciated in small doses.

Though it’s questionable that this book will convince someone to adopt a pet, what it will do is cause the reader to pause and appreciate the complexity of animals and their place in our world, while contemplating our “calling” to protect that world. Ecologist Carl Safina, author of Beyond Words: What Animals Think and Feel, said in a recent podcast that he would not want to wake up to a world where there were only people.

Christine Baleshta is a writer living in Austin, Texas, who focuses on wildlife and the natural world.