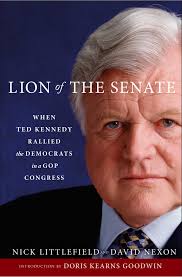 There has long been an assumption that watching legislation being made ranges from unpleasant to downright unbearable. Congress and its members have routinely been criticized for lacking any fealty to the precepts of American democracy, instead functioning only to create and sustain its own power fiefdoms. Though contemporary public opinion about Congress is near its all-time low of nine percent, reached in the fall of 2013, almost never has the institution enjoyed overwhelming public support.

Instead, the legislative branch of government has been cursed for gridlock, for overzealousness, and for inaction, among other things. These complaints are not new to the early 21st century but instead can be found throughout the nation’s history. No small reason for the negative caricatures of lawmaking comes from the fact that we know too little about what Congress does at any given point in its history or why it matters.

Lion of the Senate: When Ted Kennedy Rallied the Democrats in a GOP Congress, by Nick Littlefield and David Nexon, remedies that problem for the late-20th and early-21st century Senate. Part work of scholarship and part insider memoir, Lion of the Senate provides a delightful romp through recent political history, reminding readers that Democrats and Republicans used to work together regularly for the greater good of the electorate. The authors show how their boss, adored in some quarters and reviled in others for his liberalism, often functioned in pragmatic, bipartisan ways when necessary to achieve legislative results.

This book is not a full biography of the youngest of the three Kennedy brothers to achieve the national political stage, but it does provide a thoughtful treatment of his career during the last six years of Bill Clinton’s presidency, the years after the Republican capture of Congress in 1994.

The authors are decidedly sympathetic toward their subject, and they make what will seem to academic readers (and to readers who do not share their partisan views) naïve statements, such as the claim that the GOP sweep of the 1994 midterm elections was “unforeseen.” Flawed though it may be, the book is valuable because it tells “the story of how Kennedy worked, what made him so effective.”

The chapters that follow unfold chronologically, and they describe in precise detail the many battles Kennedy fought to sustain the liberal-minded political economy forged during the New Deal and expanded during the Great Society. We are shown his consequential role in minimizing the impact of tax cuts on social services, his unrelenting fight for healthcare reform, his efforts on behalf of AIDS care, and his advocacy of improved public schooling, among other issues.

While there would not be a book without these narrations, what makes Lion of the Senate worth reading are the many behind-the-scenes sketches the authors draw, detailing the otherwise unrecorded private relationships and negotiations among members of the Senate. The reader assumes the role of spectator to what were otherwise private, intimate negotiations, the most notable being the close working relationship Kennedy forged with Republican senator Orrin Hatch of Utah. Hatch and Kennedy were polar opposites in politics, in culture, and in personality, but they respected the acumen and perspective each brought to the Senate floor.

Elsewhere, the authors recount how Kennedy worked with Joe Biden, then a Democratic senator from Delaware, to negotiate a deal with North Carolina Republican Jesse Helms. Helms was blocking passage of eight healthcare bills the Massachusetts Democrat wanted, and Biden had stopped the confirmation of a judicial appointment Helms desired. When all parties agreed to stand down, the healthcare bills were enacted and the judge received his appointment to a higher court.

Often, though, politics in the Senate was not simple. The authors carefully describe the byzantine rules and the complex efforts Republicans and Democrats deployed to manipulate the rules to their partisan advantage.

One example came in 1996 over an increase in the minimum wage where Kennedy ultimately bested Senator Bob Dole of Kansas, then a Republican candidate for president. Losing that fight and the concurrent fight over a healthcare reform bill, Dole ultimately resigned from the Senate in the spring of 1996 to focus full time on his presidential campaign.

The authors conclude, “Looking back, it was apparent Dole had lost control of the Senate to Kennedy because of Kennedy’s two flagship initiatives [the minimum wage and healthcare]…[Dole] lacked the vision to turn a losing hand into a winning hand. A different strategy would have recognized the handwriting on the wall and packaged the legislation in a way that he could enthusiastically support and claim credit for.”

That Dole did neither, according to the authors, reveals he was “on the wrong side” of two issues with tremendous popular support. They emphasize this point to stress just how effective Kennedy was in maintaining his legislative momentum for preserving and expanding liberal political agenda even in the face of GOP majorities on Capitol Hill.

Lion of the Senate is a fun and provocative must-read for all who care about American politics. It shows there are reasons to have faith in the resilience of democracy while also suggesting just how important individuals are in making possible the continued health of the deliberative process of lawmaking.

Nancy Beck Young is professor of history at the University of Houston and most recently author of Why We Fight: Congress and the Politics of World War II (University Press of Kansas, 2013).