Let Me Tell You What I Mean

In this new collection, the famed essayist demonstrates her longstanding mastery of the form. 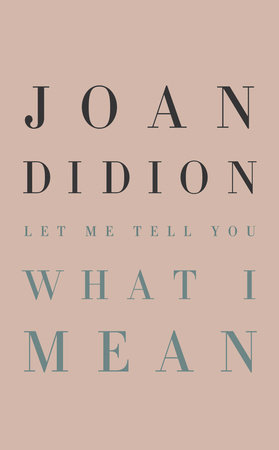 In the fall of 1954, an unworldly undergraduate at Berkeley signed up for English 106A, a revered writing workshop taught by an august academic. The semester-long course convened at noon for one hour on Mondays, Wednesdays, and Fridays, but from the way in which Joan Didion relives it in her new essay compilation, Let Me Tell You What I Mean, the experience was mostly agony and angst:

“[It] was widely regarded…as a kind of sacramental experience, an initiation into the grave world of real writers…I remember each meeting of this class as an occasion of acute excitement and dread. I remember each other member of this class as older and wiser…more experienced, more independent, more interesting, more possessed of an exotic past: marriages and the breaking up of marriages, money…sex and politics and the Adriatic seen at dawn…the very stuff which might be substantiated into…stories.”

Didion ramped up to a feverish fright, ransacked her closet “for clothes in which I might appear invisible in class” (an old raincoat), pushed through the term, and never said a word.

Each student was required to write five short stories to pass, but Didion, doubtful that her simplistic life could possibly fill up so many pages, only managed to squeeze out three:

“Mr. Schorer, a man of infinite kindness to and acuity about his students divined intuitively that my failing performance was a function of adolescent paralysis, of a yearning to be good and a fright that I would never be.”

He gave Didion a B, and “I wrote no more stories for exactly ten years.”

But in her senior year, Didion won first prize in Vogue’s “Prix de Paris” writing contest and was hired by the magazine as a research assistant. Then, in a prolific, seven-year rise, she honed a career composing a cornucopia of merchandizing, promotional, and editorial copy, which crested with a promotion to associate features editor: “At Vogue, one learned fast, or one did not stay…Going to work…[there] was, in the late 1950s, not unlike training with the Rockettes.”

Meanwhile, Didion placated her private wrangles with writing and published Run River, a novel, in 1963. But success pitched her into daunting doubt:

“I was suffering a fear common among people who have just written a first novel: the fear of never writing another…I sat in front of my typewriter and believed that another subject would never present itself…Accordingly, as a kind of desperate finger exercise, I tried writing stories [which] I had, and have, no talent for…no feel for the…rhythms of short fiction.”

Eventually, Didion ditched the dilemma of diluted “little [epiphanies] and small window[s] on the world” that were birthed by short stories, and went for the wider wallop, larger lens, and radiating resonance associated with nonfiction. “I wanted not a window on the world but the world itself. I wanted everything in the picture.”

In six decades of reporting with meticulous, nuanced notice, Didion has montaged in words myriad mortals, monuments, and movements. For this book, she moved her scrutinizing eye over Nancy Reagan, Tony Richardson, and Martha Stewart, William Randolph Hearst, Ernest Hemingway, and Gamblers Anonymous, to generate a fair-minded assessment.

“Her narrative nonfiction” according to Hilton Als, who authored the foreword of the book, “is a question about the truth. And if her nonfiction is synonymous with anything, says Didion in work after work, it is with the idea that the truth is provisional, and the only thing backing it up is who you are at the time you wrote this or that, and that your joys and biases and prejudices are part of writing, too.”

Arguably, Joan Didion merits a luminous legacy in American letters on par with Mark Twain, Walt Whitman, and Frederick Douglass, Emily Dickinson, Carson McCullers, and Eudora Welty. But she is unlikely to cross over into The Canon until an academic institution with ample audacity deduces that her words wield sufficient weight, warmth, wisdom — and worth.