A former officer of the court reveals that justice is hardly blind. 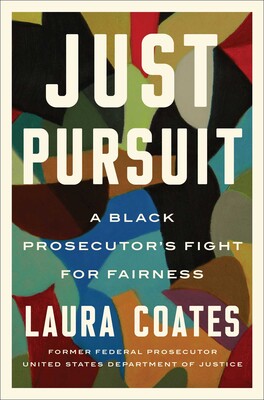 With the publication of Just Pursuit, Laura Coates takes her place in a pantheon with Frank Serpico, who blew the whistle on police corruption in the 1970s. A former detective with the New York Police Department, Serpico’s public testimony led to the Knapp Commission and massive police reforms. But, as Coates writes in her second book, the corruption continues, poisoning every part of the justice system.

Serpico’s exposé led to a bestselling book and a film starring Al Pacino, as well as a TV series and a documentary. Five decades later, Coates’ Just Pursuit carries that same commercial potential as it exposes lazy lawyers, preening prosecutors, cynical cops, and judges who preside over their courtrooms like tin-horn dictators, leaving in their wake an outsized number of poor, Black people forced to stand before them.

Citing one particularly egregious example, Coates writes about a white female judge who used her time on the bench to shop a website for boots rather than listen to the young Black adolescent before her testifying about the sexual abuse she suffered for years at the hands of her mother’s live-in boyfriend.

“Skipping down the center aisle, [the youngster approached] the witness stand in an above-the-knee skirt, breasts bouncing unrestrained,” writes Coates. “She giggled as she raised her right hand…She tugged at her skirt…the skirt buckled along her hips, slightly twisting her zipper…she slouched and tugged again at her skirt on one side…She rubbed her glossed lips together.”

Immediately, Coates knows the case is lost. “The judge’s focused glare on the child’s appearance said everything,” she writes. Still, Coates hopes she’s wrong, staying in the courtroom to find out. Sadly, the judge meets Coates’ expectations and lacerates the victim: “No one who has been raped, even a young teenager, would have skipped down the aisle of the courtroom dressed like that…her clothes were ill-fitting and she was not even wearing the appropriate undergarments, not even tights.”

Coates hung her head in sorrow, “unable to watch this child try to understand what about herself had warranted such contempt.”

Not every one of the 15 chapters in this book is equally weighted but each carries the heavy load of racism that Coates saw during her seven years as an attorney in the Civil Rights Division of the Department of Justice. Writing with verve and style, she relates her experience as a poll watcher in “a small town somewhere in Mississippi” during Obama’s second presidential campaign.

“The Deep South made me nervous," Coates admits, as she walked into the same territory where the KKK once bombed the 16th Street Baptist Church, killing four young Black girls attending Sunday school; where Civil Rights activist Medgar Evers was assassinated; and where 14-year-old Emmett Till was murdered for allegedly whistling at a white woman. A Black female poll watcher in Mississippi, even in the 21st century, must feel like a Bengal tiger walking into a gun store.

It’s unnerving to read about the precautions Coates felt she had to take to be safe on that trip. Pulling into a sit-down restaurant, she scans the menu “to find whatever food would easily show if someone tampered with it. Nothing with gravy or sauce or anything else that covers someone’s spit under a bun. Something fried, served so hot it would kill the bacteria, was always the best option.” At the hotel, she elects to take the elevator a few floors. “I didn’t want to risk getting trapped in the stairs.”

In some chapters, Just Pursuit reads like a personal diary, such as when mother-to-be Coates experiences her first pregnancy. Walking into a courtroom to try a case, she stops to take a call from her OB-GYN, who tells her that tests show the fetus has an elevated alpha‑fetoprotein level, indicating spina bifida.

Coates tries to steady herself. “Don’t worry,” says the physician. “You’re still within the range to terminate your pregnancy. You want to call me after your trial? We can talk more then.” Raw and vulnerable, Coates lashes out. “Do you have any idea how heartless that just was? Why would you tell me that news in that way?”

“I didn’t mean to offend you,” the physician apologizes. “I just knew you didn’t have much time and you always seem so matter-of-fact.” Up to this point in the book, the doctor is correct: Coates has presented herself as she now appears on CNN — head-of-the-class smart and tensile tough, with a bit of suffer-no-fools impatience. At that time, though, you could almost hear her echo Sojourner Truth’s lament: “Ain’t I a woman?”

Coates does not reveal how she resolved that first pregnancy, but in later chapters, she discusses giving birth to her son and being pregnant again with a daughter. Nursing mothers who work (and their husbands) will relate to her various mentions of “pumping” and “keeping at least five full bottles [of milk] during my workday” and “drinking water incessantly to keep up with my milk supply.”

Having children seems to have changed the hard-charging prosecutor. “When I first became a prosecutor, I had thought each case could represent a dot on the arc that Dr. King hoped would bend toward justice,” she writes. “Now, I wondered if I was bending the arc of justice or breaking it, and I was afraid the justice system might just break me.”

Nor does she look back on her years of public service with pride:

“[T]he collective memories of trauma are so overwhelming that I fear I might lose myself if I don’t fill my time. The violence didn’t happen to me. But it…eviscerated me…and I still grapple with the scars of secondary trauma.”

Laura Coates once believed that justice was binary, achievable, and universally understood. No longer. Her experience has shown her a grotesque, twisted system corrupted by racism that needs to be reformed. She offers no solutions, but she supports her premise in horrific detail: “[T]he pursuit of justice creates injustice.”

Especially for those with knowledge of Nazi scientist Konrad Lorenz and 20th-century German history, this novel is a window into the subtleties and complexities of life in post-World War II Germany.