Ignorance: Everything You Need to Know About Not Knowing

A frustratingly limited examination of what it means to be in the dark. 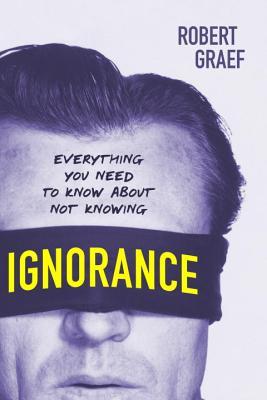 Ignorance is a timely book. In it, Robert Graef attempts to map out obliviousness in all its iterations and contexts, from racism to groupthink. His discussions on anti-intellectualism, which respond to the resentment against expertise in our political culture by championing knowledge and discovery, are his strongest.

Graef opens the book with a counterintuitive reading of the Garden of Eden. He argues that Adam and Eve’s banishment gave the pair freedom to explore, experiment, and create. The result is an origin myth for humanity in which Original Sin represents man’s discontent with the ignorance of shame and reality.

But what starts as a poignant and culturally necessary critique of ignorance quickly descends into dense and counterproductive metaphors overripe with poetic conceit. For example, Graef likens the rampant spread of misinformation in our media and public discourse to malware. The language is unnecessarily labored. It is better to say things clearly, with precision, which Graef averts by claiming that the metaphors are inevitable.

Better they should be avoided.

The metaphors are doubly problematic because they limit the reader’s potential to learn. Graef uses clichéd referents to describe the agencies, individuals, and regulations that govern the communications sector. But without naming these entities and the power dynamic between them and the public, he makes it unclear how he sees these relationships perpetuating ignorance.

The alarming lack of specificity raises doubt over whether Graef truly understands his chosen topic. As a retired journalist and teacher, he is certainly not uninformed; his research demonstrates an intellectual sincerity that shouldn’t go unnoted. But in attempting to outline the totality of ignorance, the author never provides a cohesive definition. Rather, he has a loose grip on the term.

In a passage on the 1969 moon landing, Graef juxtaposes this moment of discovery with the coeval Civil Rights movement. The ignorance of scientific knowledge not-yet-known and the ignorance of racism is more than a rhetorical duality.

The former describes what humanity has not figured out in the pursuit of knowledge, while the latter points to the unscientific belief that skin pigmentation endows superiority. There’s no evidence that Graef appreciates this distinction or has pondered the difference between knowing and not knowing what you don’t know.

To not know what you don’t know is a key feature of ignorance. Without a modicum of education and literacy, individuals cannot process the plethora of information available to them. Ironically, Ignorance, replete with its unhelpful metaphors and disconnected juxtapositions, follows this pattern.

Without specificity and clarity, Graef leaves the reader without a way to analyze the information he presents. The question thus becomes: Does this book leave the reader more ignorant about ignorance?

Ignorance reads like an argument that wasn’t ready to become a book. Graef’s gravest misstep is in the section on the terrorist group Boko Haram, in which he writes that a Western education would’ve prevented the members’ radicalization.

That is dangerous. His claim elides the fact that Westerners have joined ISIS and al Qaeda despite their education. Graef reduces the whole of global human interactions to an East-West binary. Making Western education the arbiter of truth and light only suggests further that Graef has not thought through ignorance enough.

Moreover, Graef locates humanity between the figurative poles of knowledge and ignorance, with history charting its reach to either side. But he then states that “the two camps have come to be known as conservative and liberal.” Not only does he mischaracterize the ontology of conservativism, he also attempts to universalize the concept of ignorance with Western political labels.

Graef’s unacknowledged bias is further evident in his shallow characterizations of conservative politics and religion. Again, he uses contrived metaphors to explain how tribalism and ideology in politics can produce ignorance.

He writes that polarization has impelled neo-conservatives to flee to the “Right’s HQ.” Does he mean an ideological camp or an underground lair? If it’s the latter, is there a secret knock? Another aside quickly follows that throwaway line, leaving the reader only less enlightened on the history of American political thought.

Zach Marschall is a freelance writer and Ph.D. candidate at George Mason University.

Likable he wasn’t, but who could dispute the importance of the dictionary-maker's legacy?