Or, when you figure out all your characters have blue eyes and drink whiskey. 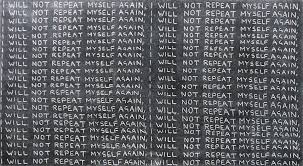 Seven of the 13 stories in the original version of my manuscript Bystanders had characters named Jack.

Apparently, Jack is my go-to name for guys in fiction. I had no idea I was doing that until I put them all together for the book. Who knows how many other Jacks I've given birth to on paper through the years?

I managed to find-and-replace all but two of those Jacks (in one, his name is integral to the theme of the story; in the other, he's a character in my novel-in-progress and I couldn't give him up), but that realization made me start looking for other tics in my writing.

I discovered some pretty cringe-worthy ones. My characters really like to shrug and sigh. They nod their heads a lot. They like to tell jokes (don't we all?), and several of them specifically loved "good heat" in apartments (note: so do I). In addition to Jack, I also apparently really like the name Verna. And lots of whiskey is always being poured.

I think every writer has their little quirks, their favorite turns of phrases and descriptions. In an earlier version of his novel in stories, On the Road with Del and Louise, my husband, Art Taylor, says he did a search for "just" and found 683 of them.

Years ago, when I read Emma Straub's lovely short-story collection Other People We Married, I remember noticing that nearly every story had a character who did yoga or thought about yoga. It was a detail that stuck with me, especially since, at the time, I really didn’t know anyone who did yoga, yet in her characters' worlds it seemed essential.

And when Art and I read aloud the entire Sherlock Holmes stories and novels a few years back, hearing the words made us pay attention to the favorites Sir Arthur Conan Doyle liked — which is why we both now associate the word "singular" with the great detective.

Some things — like rhythm, styles, sentence structure — are part of the overall writer's essence. Those things make you the kind of writer you are. They distinguish the Hemingways from the Woolfs from the Pynchons and are what help you develop your voice.

But if you use them all up too often, it can stale your writing. Systematically and deliberately varying up your vocabulary and your descriptions is not a bad idea.

So how do you prevent yourself from creating characters that eat ranch dip all the time or look far off into the distance wistfully? How do you eliminate 300 em-dashes or "actuallys" from your sentences? My answer: You don't. At least not in the first draft.

The first draft is where the sloppy writing comes in, and that's cool. When you're in the groove, you can't really stop to think about some fantastic unique description of a character's reaction to something, so just let her nod. Don't let a character's reaction stop you pushing forward in a scene because you can't think of any elegant way to say he got mad.

The time to worry about it is during the revision, when you can go back and spot those lazy phrases and fix them. And sometimes distance is the only way to truly see them — ever notice how much easier it is to cut and hack stories you haven't touched in years?

Sometimes, in searching for tics, you can also reveal inaccuracies. (If a lot of your characters shiver, then make sure they aren't sitting in a sauna.)

Here are some of the things, in addition to character names, that I searched for before I shipped off Bystanders to the publisher:

I'm sure I've got other tics that I'm not aware of yet, which is why I try to surround myself with writers and editors who are smarter than I am. But even if your friends, family, or editors miss your writing quirks before the dreaded go-to-print — oh, well. Your imperfections are what make you unique, right? So 'fess up and tell me in the comments — what are your weird writer tics?

Tara Laskowski nods and shrugs and shivers a lot in the suburbs of Washington, DC. She is the editor of SmokeLong Quarterly and has a story collection, Bystanders, coming out in spring 2016 from the Santa Fe Writers Project.

So much to be grateful for, so little space to list it all...

Not All Moms Love Pink