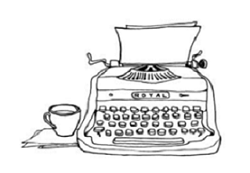 While visiting a college town a few years ago, I spied a flier for a talk by a famous author on the topic “Why I Write.” That’s a no-brainer, I muttered indignantly to myself. She writes because she’s extravagantly talented, gets published, receives rave reviews, wins awards, and her books are popular with readers. To wit, she earns money and acclaim.

A more interesting question (for me, anyway) is why I write. Though I have received some encouragement through the years — being invited to write this column, for example, and signing on with an agent — I’ve endured a lot of frustration and rejection.

Why do I go on? Why don’t I just pack up my computer keyboard and dedicate myself to baking the perfect chocolate chip cookie, knitting baby booties, or making a splendiferous Eden of my back yard?

Because I suck at baking, I’m all thumbs, and they’re brown. Because I’m good at writing and it makes me happy (when it doesn’t make me sad). Because hope is the Energizer bunny of human emotions. Because I believe in myself. Because without writing, I’d feel useless, hopeless, and dissatisfied.

Because, goddammit, I just can’t help myself.

But, sometimes, it does seem as if I’m just placing my tiny feet in the footsteps of giants. As a columnist, I know how difficult it is to come up with fresh, new subjects; “Why I Write” is neither. In the words of John Entwistle, “Every idea in my head, someone else has said.”

George Orwell basically dropped the mic on the subject with his seminal essay, “Why I Write.” As if anticipating the Internet’s infatuation with the list, he gives four reasons (bracketed by a number of humorous, incisive paragraphs and a youthful poem). They are, in brief: egoism and fame; aesthetics; influencing the historical record; and coaxing the reader to an understanding of how to usher humanity toward that elusive happy ending.

Since then, other writers, being writers, have insisted on having their say, too. Just Google “why I write” and hearken to the wordy chorus.

Joan Didion says that, as a keen observer, she writes to impose her imagination on the world. Francis Spufford claims that he writes because he’s selfish, addicted to the workman-like state of grace that overcomes him on the good days.

Reginald Shepherd writes as a bid to outlast the shuffling of his mortal coil and to stave off boredom. Jim Harrison eloquently reasons that writers write because they are born that way, but it is a hard slog against everything that would silence them. Claire Messud writes to cast a magic spell. Zadie Smith asserts that writing should be a protest against the accepted norms, a blazing of a new path: a refusal, rather than an acquiescence.

To these things, all of with which I agree, I might add: I write to satisfy the voices in my head.

According to Orwell, “I had the lonely child’s habit of making up stories and holding conversations with imaginary persons, and I think from the very start my literary ambitions were mixed up with the feeling of being isolated and undervalued.”

Though I was not particularly lonely as a child — the youngest of three siblings, I was the coddled baby of the family and I had a gang of friends — I did live much in my imagination and books. Sometimes when my friends came over, I’d ignore them and read. I talked to myself so much that my brother called me “Daff-Daff-Ducky.” Even strange looks, pointing fingers, and giggles could not stop me from holding court with myself in public.

As I got older, I realized that I could transubstantiate the oral to the written, sparing myself ridicule and imposing some permanence on the cycle of stories that spun through my head.

And also this: I write because I can.

As an adoptee, I always consider the what-ifs and the therefore-by-the-grace-of scenarios. I had the profound good fortune to be raised by parents who revere books, reading, and ideas. From years of global explorations, I know that the majority of the world’s population has neither the leisure nor the literacy to wrestle the words in their head onto the page.

I have a clean, well-lighted room of my own in which to work. Access to electricity and computers facilitates my “writing process,” which consists of writing every idea that pops into my head, filling the pages with a glut of words, and then going back and deleting, deleting, deleting; stitching a sentence there into a paragraph here; and shepherding the sprawl of thoughts into a neat, coherent package. What takes a day on the computer would take a week by hand.

Most important, I have the support of those who matter the most to me and the wherewithal to keep obeying those voices in my head.