Does John Updike’s perspective hold up over time? 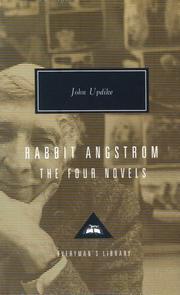 We recently started a new series over at the Thrill Begins called “Pay It Forward.” The regular columnists for the site are going to devote their weekly essays to writers who’ve had an impact on them, writers they think others should read. I love this idea and I’m happy we’re doing it, and it’s shown me how hard it is to narrow down a list of favorites.

John Updike was one of my choices. I’ve decided not to write about him for TTB, given that he doesn’t exactly need whatever attention this project generates (he’s already famous and also dead). But for years and years, I was a hardcore Updike fan. I haven’t read everything he’s written, but I’ve read and re-read a lot of it. And I’ve been thinking about him recently.

Despite his liberal leanings, there’s no question that much of Updike is out of step with the liberal side of today’s literary and political views. His characters were typically white and masculine, in accordance to a traditional American mid-20th century version of white masculinity defined by wealth and sexual prowess; excessively self-centered; their families seen as more of a burden than a blessing. They preferred to stay in suburbia, a comfortable cage they rarely left, even as they paced uncomfortably inside it.

But if Updike’s characters grudgingly accepted confinement, his prose never did. He was a fearless writer. While most books follow the examples that television and movies set when it comes to sex — and pan the camera away when their characters start to undress — Updike preferred to turn on the lights, rip away the covers, and show the raw beauty of fucking.

Similarly, his novels tackled race and gender and politics and art, albeit from the clumsy perspective of his favorite character, that 1950s white guy who fears the changes happening around him. He used this trope so often that it’s forgivable to assume the artist wasn’t so different from his art.

A former professor of mine once opined that Hemingway didn’t hate women, he just didn’t understand them. Maybe. And, often, the same seems true of Updike. I remember a scene in his book Marry Me when a woman confronts her husband’s mistress and, after a terse conversation, the two women embrace.

I also remember thinking how wildly off the mark Updike’s perspective was — this strange moment of compassion, mistakenly meant to signify something deeply feminine in nature, and how unnatural and false that action was for those characters.

And I remember thinking how odd this was for a writer who possessed such keen eyes.

It wasn’t what those eyes saw, but how they saw it. Updike’s saving grace was the unfailing power of his prose: his Nabokovian sense of timing, uniqueness of description, and rabid attention to detail.

For an example, read “A&P,” his often-taught short story that serves as one of the most concise descriptions of Updike’s writing. The timing is uncanny, the prose difficult to imitate, there’s a spot or two of humor, and a struggle with societal change (that devastating “scared pigs in a chute” line). And casual sexism.

I know readers who find that sexism too unpleasant to look past, and others who make the argument that the young cashier in the story, who cruelly objectifies the three girls in the store, later realizes the extent of that objectification and quits over it. As with any literary theory, both views provide insight into the story. And likely neither is entirely correct.

Recently, Roxane Gay wrote a short essay for Marie Claire lamenting the desire to lionize terrible men who produce great art. I don’t know if Updike was a terrible man, but I do know he wrote terrible characters whose redemption, perhaps unintentionally, fell short: Harry “Rabbit” Angstrom, the protagonist of four lengthy novels chronicling decades of unrest in America, is an awful man, regardless of Updike’s professed fondness for him.

As I often do with Gay’s work, I find much of her essay inarguable, aside from the last line: “There is no scarcity of creative genius, and that is the artistic work we can and should turn to instead.”

It’s a nice sentiment, but one that anybody who has read submissions for a literary magazine would have reason to deny. Creative genius is scarce. My own field of crime fiction is currently in a run of terrific work, and some of it is brilliant. I don’t know if any of it is genius.

Months ago, my friend Tom Sweterlitsch wrote about the changes in human production, particularly in literature. He imagined a future where computers wrote books, and their results surpassed human efforts. That’s not unimaginable.

Ultimately, Tom saw our saving grace as existing in our flaws, and I think he’s right. Updike was often wrong, no matter how impeccable his prose. But maybe those errors separate his work. Greatness is perhaps imitable, as Gay suggests. But the human eye, with the trappings of its limited view, is unique.

E.A. Aymar’s most recent book is The Night of the Flood. He’ll be speaking on the “Writing a Page-Turner” panel at this year’s Washington Writers Conference on May 4-5 in College Park, MD. Click here to register.