Two Books on the Age of MTV

Juicy stories for those who remember music videos by those who introduced them on MTV. 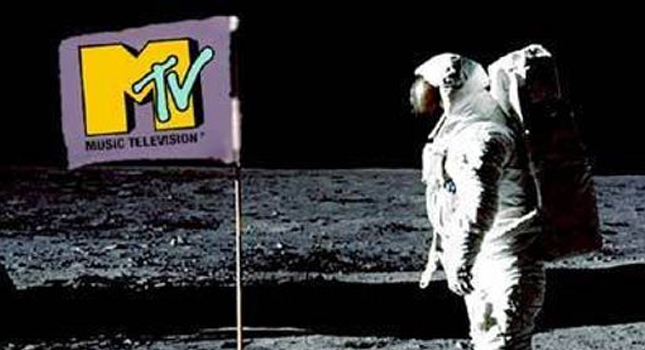 “We’re the reason you have no attention span. And you can pin reality TV on us too. You’re welcome.”  (Mark Goodman, VJ)

“The [MTV] studio was such a communal den of jackassery.” (Lisa Kennedy Montgomery, The Kennedy Chronicles)

Dolly back. Fade to black.

Cue camera. And, for readers of certain ages, the night MTV went live a million years ago, Aug. 1, 1981, in those pre-Internet, pre-streaming, apparently pre-anything days, the world did indeed change. To chronicle those heady, big-haired, early times of MTV, we have two new books — both breezy, both beach-ready and both shallow as a kiddy pool or a People magazine profile of Justin Bieber.

If you don’t know who those last two are, these books are probably not for you.

One must ask the question: When did you come of age? Were you, say, 14, surreptitiously watching Madonna’s “Like a Virgin” video back in ‘84? Or maybe you were in college? 1986? 1994? It matters. See, Paul Simon — mere mention of him dates me — in his landmark 1986 album “Graceland,” sang, “Every generation throws a hero up the pop charts.” And, indeed, here we have thrown up some heroes. If the ‘80s and ‘90s were your time and watching Michael Jackson’s “Thriller” video for the umpteenth time was a mind-blazing experience, or if MTV’s snarky “Beach House” show provided sustenance during those long summer days and nights of the mid-‘90s, read on.

Here, then, in VJ, are the scattered recollections of the first five video jocks, as told to editor Gavin Edwards — the early video jockeys who, for a time, were hipper than anybody. Edwards, writing in the preface, says the VJs were a “five-headed Virgil, taking us through MTV’s Inferno, past the circles of slow-motion table-flipping, girls in cages, and arty black-and-white cinematography … The presence of the VJs meant you always had a friend watching with you.” Whoa. That passage shows promise — a whiff of some serious journalism. Maybe VJ is an inquiry into the social changes brought about by the cultural juggernaut that was MTV, thoughtfully related in a you-are-there memoir by Nina Blackwood, Mark Goodman, Alan Hunter or Martha Quinn.

What we’ve got are vapid — but fun — incident-related chapters with cute titles such as “Got My Back Against the Record Machine/Close Encounters with David Lee Roth,” “You May Find Yourself in a Beautiful House with a Beautiful Wife” and “And Now You Find Yourself in 82.” Each VJ speaks up on a subject: Nina remembers the times she ran into the ladies’ room to hide, Martha says something cute about David Lee Roth, Mark confesses he doesn’t think it happened that way and then Alan feels guilty about all the drugs. Or Martha again wishes she wore a different shirt while interviewing David Lee Roth.

Not that there’s anything wrong with that.

But, as the ‘80s and VJ wear on, they all lose their jobs, and we encounter a bit of actual memoir when the VJs relate their tales of the shock of it all coming to an end — the money problems, trouble finding a new job, divorce, coming face to face with the non-invincibility of youth. They all speak with the voice of experience, marveling at their younger selves, and the reader may at last nod with some satisfaction. But not that much.

Then, back on the beach, you roll over and pick up the slightly more tasty The Kennedy Chronicles. Lisa Kennedy Montgomery, you may recall, was that very young, somewhat annoying, in-your-face, fearless interviewer of high and mighty rock stars during yet another “golden age of MTV”: the ‘90s.

Kennedy, then an outspoken, conservative, Dan Quayle-loving Republican in a den of happy Clintonistas, now a card-carrying small “l” libertarian, says, “I am writing this book for all the people who came of age during that time … that fleeting moment of our youth … and it sure as hell is fun to relive those passionate, earnest moments when music mattered and time stopped.”

Doesn’t it actually seem that music really mattered and time stopped when we were all 18?

She goes on: “I was fortunate enough to sneak onto the express and ride it though the greatest age in MTV history … lending a megaphone to a new generation to amplify and project its immoral tastes onto a blank, waiting screen.”

As with VJ, a hopeful start. Maybe Kennedy will really go somewhere, give us a serious — but fun — look at what it all means: How much entertainment do we really need? How did we survive in those pre-streaming, pre-Tweeting days? But Kennedy promptly devolves into a rambling, sort of fun collection of vignettes: We’re talking with Trent Reznor, or Dweezil Zappa or Jenny McCarthy — quite touching, this one — or we’re hearing about how she almost lost her much-ballyhooed virginity to Michael Jordan in a friendly game of dice.

Suggestion: Anytime Kennedy begins a sentence with, “One night, we …” — look out.

But, on the beach, maybe we’re OK with that.

Kennedy is a good writer, but she missed an opportunity. She has produced a mostly shallow, bitchy memoir of her wild 20s that is sometimes fascinating, sometimes fun, but ultimately forgettable.

Barry Wightman’s novel Pepperland, a revolutionary, technology rock-’n-roll love story, is now available from Running Meter Press, an imprint of Big Earth Publishing. He is fiction editor of Hunger Mountain, a literary journal of the arts in Montpelier, Vt. He’s a corporate-marketing guy and a contributing essayist to WUWM Milwaukee Public Radio, and he leads a rather vintage rock-’n-roll band. http://www.barrywightman.com/

And why you should, too! (Hint: It’s not just for the great rewards.)

7 Most Favorable Reviews in July 2021