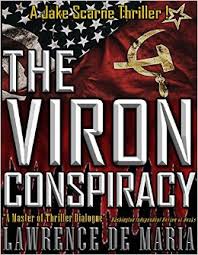 It is a given among many thriller writers like myself that research is a royal pain in the asterisk.

I mean, nothing can ruin a good story like facts can! After all, fiction writers are in the business of making stuff up, right?

Now, take “virons.” These nasty bits are a combination of viruses and prions. They are so small it takes millions of them to get through the eye of a needle after the camel. They kill camels, humans, fish, asparagus — anything you can think of.

And they don’t exist.

I made them up, and they wreaked appropriate biological havoc in my thriller The Viron Conspiracy. I’m pretty sure there are people out there who now believe in virons. I’m also pretty sure that one day some scientist with too much time on his or her hands will produce a real viron, which will wipe out the human race and root vegetables before the scientist can even collect a Nobel Prize.

(Just for the record, and to prove that I do look stuff up: A prion is, according to the online Encyclopedia Britannica, “a small proteinaceous infectious disease-causing agent that is believed to be the smallest infectious particle.” Among other things, prions can cause Gertsmann-Straeussler-Scheinker disease, which is as bad as it sounds.)

Writers do need to get some facts right, if only to provide a dash of verisimilitude in their books. I mean, readers get downright nasty if you put the Pacific Ocean in Kansas (unless you’re writing a global-warming thriller).

And, occasionally, research can be enlightening.

And, as the Internet search further revealed, “Buying a suppressor is a simple process which generally requires less paperwork than buying a new refrigerator.” (Using refrigerators as a murder weapon is problematic.)

In my home state of Florida, the Fish and Wildlife Conservation Commission recently repealed a six-decade-old law that prohibited the use of pistol and rifle suppressors in hunting for deer, gray squirrels, rabbits, wild turkeys, quail, and crows. Now, I’m not an anti-gun or anti-hunting fanatic. I believe honest citizens should be allowed to have guns for protection or to take game. I once shot a deer as a rite of passage and basically ate everything but the antlers.

But silencers for squirrels? Are people afraid that a wounded rodent will track down the source of the shots and attack? Isn’t hunting supposed to give animals a chance? A gunshot that misses presumably alerts an animal to the realization that it’s a good time to beat feet. Can you imagine a hunter who uses a silencer to pick off a flock of turkeys one by one? Do the other birds see a fowl fall over and think: “Gee, Fred must’ve had a heart attack; we told him to lay off the stuffing.”

Maybe that’s why I limit my research. It’s too damn scary.

Lawrence De Maria, once a Pulitzer-nominated New York Times reporter, has written more than a dozen thriller and mysteries on Amazon.com. His most recent mystery, Turtle Dove, is available at ST. AUSTIN’S PRESS (BOOKS BY DE MARIA). He is currently battling an inner-ear infection that he is convinced was causes by virons.