Corey Robin’s The Enigma of Clarence Thomas explores the life of an oft-perplexing jurist. 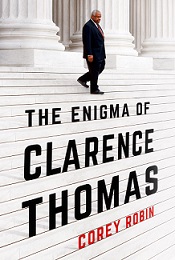 Clarence Thomas, the longest-sitting justice on the current Supreme Court, is referred to as the silent one because he hardly speaks during oral arguments. Instead, he sits quietly in his black robe and listens to his colleagues joust with the lawyers presenting their cases to the high court.

Rarely, if ever, asking a question, he dismisses those who criticize his silence. “Let them read my opinions,” he says. “I say what I have to say in my opinions.”

In those opinions, Thomas shouts at the top of his lungs.

He advocates for crushing Roe v. Wade and a woman’s right to abortion. He links birth control and Planned Parenthood to the eugenics movement of a century ago. He opposes race mixing, sees integration as harmful to African Americans, and thinks the state should support separation of the races.

He attacks every effort to bring African Americans into mainstream white America and rails against voting rights, property rights, gender equality, affirmative action, and legally mandated segregation, except in prisons. In effect, the second African American to sit on the Supreme Court presents as a racist with misogynistic views that are foreboding, leaving little room for progress and none for hope.

In 1985, Thomas addressed the graduating class of Savannah State College on what he calls the unholy triumvirate: “I am here to say that discrimination, racism and bigotry have gone no place and probably never will.” That dystopian view enunciated more than three decades ago has hardened over the years as it continues to inform his jurisprudence.

Corey Robin, who teaches political science at Brooklyn College and the CUNY Graduate Center, rejects “virtually all of Thomas’s views” as “disturbing, brutal, even ugly,” but he wrote The Enigma of Clarence Thomas to “make us sit with that discomfort rather than swat it away. This is not so that we adopt Thomas’s views, but so we see the world through his eyes — and realize, perhaps, to our surprise that his vision is in some ways similar to our own. Which should unsettle us even more.”

There have been numerous books written about Thomas, but Robin’s is unique in that it takes the justice’s written opinions and examines them against the backdrop of Thomas’ own life: Growing up in Pin Point, Georgia, he experienced the prejudice of Jim Crow, but came to feel its lash “much worse” when he moved north to go to Yale Law School. There, as one of only 12 black students, Thomas says he felt the object of the most intense snobbery and suspicion:

“You had to prove yourself every day because the presumption was that you were dumb and didn’t deserve to be there on merit.”

At that time, Thomas, a black nationalist devoted to Malcolm X, identified as “a radical” who voted for George McGovern (D-SD) for president in 1972, although he said he thought the liberal Democrat was “too conservative.” Decades later, Thomas has become the darling of conservative Republicans, and President Donald Trump’s favorite justice.

Most civil rights activists support affirmative action as a needed step to try to rectify the sins of slavery, but Thomas sees it as an insulting sop to African Americans. To him, it’s a white program for white people because it elevates whites to the status of benefactors who dole out privileges to the few blacks they decide are worthy.

Robin writes that, as early as 1981, Thomas had decided he wanted to be appointed to the Supreme Court to replace the aging Thurgood Marshall, the court’s black liberal. The only problem, Robin writes, was that Thomas had no views on the Constitution. So, despite his “shoddy record” as chair of the Equal Employment Opportunity Commission (EEOC), he undertook a crash course on the nation’s founding text and, through a twisted legal labyrinth, came to the conclusion that there’s a White Constitution and a Black Constitution. A unifying Constitution is a fairytale.

In Thomas’ America, blacks and whites will never live happily ever after. This stark interpretation of the Constitution informs most of his written opinions on race, to the disappointment of progressives. As Rosa Parks said of Thomas in 1996, “He had all the advantages of affirmative action and went against it.”

On the last page of his book, the author admits that racism is a permanent stain on the soul of America, but he suggests that people of good conscience cannot stop waging the moral battle to try to right the insidious wrong. His message is to fight for our better angels and, in the words of our greatest president, to try for “a more perfect union.”

I agree with Corey Robin; Justice Clarence Thomas does not.

The rich literary cocktail that is Ancestor Trouble.