The Lives of Leaders

Presidential biographies can tell us a lot about our nation. 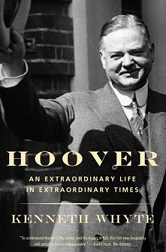 I’m not a big reader of nonfiction, and even less so of biographies, which often seem long to me because the authors work so hard to uncover new things and make their work definitive for a generation.

I’ve taken comfort from the fact that Ron Chernow, famous for Alexander Hamilton and, more recently, Grant, once said that he’s a slow reader and would have difficulty reading the books he’s written.

A big exception to the nonfiction rule, however, is my collection of presidential biographies. I have several on my shelf, a good portion of them unread or only partially finished. But when the History Book Club at Goodreads recently chose Kenneth Whyte’s Hoover: An Extraordinary Life in Extraordinary Times for its readers, I picked it up and started reading.

Like most people with only dimly remembered school lessons in American history, my take on the 31st president of the United States was that he reacted badly to the Great Depression, paving the way for Franklin Delano Roosevelt to make things right and save the nation. Hoover’s legacy is that of a failed commander-in-chief.

Whyte’s lucid and well-written (and long!) chronicle is revisionist in its attempt to restore something of Hoover’s reputation, including the long preamble to and protracted aftermath of his single term (1929-1933), though it puts his presidency in the context of its time.

My initial feeling, borne out as I got further into it, is that Hoover’s life is a history of the United States writ small, from his birth on a farm in Iowa in 1874, to his enrollment as perhaps the first student at Stanford University (home still to the Hoover Institution), through his career as a mining engineer and war-relief manager to his ascendance to politics and the presidency.

What is it about presidential biographies that makes them so intriguing? The men (and so far, they are all men) have numbers forever carved in stone in history — so that Hoover is 31 and Joe Biden is 46 — but it’s much more than that. They are rarely virtuous and sometimes scandalously immoral. But they fight their way to the top and tell us much about our politics and our nation itself.

Presidents are being subjected to the current wave of revisionism as slaveholding and military behavior previously taken for granted come in for overdue examination. This doesn’t change history, but our view of the past should always be tempered by current mores.

That said, there’s still much to learn from biographies past and present. I was drawn before to Woodrow Wilson: A Biography by John Milton Cooper Jr. (I’m assured by those who know that his account is much better than Wilson by Lindbergh biographer A. Scott Berg.) Like Hoover later, the 28th president, who was in office from 1913 to 1921, served at a time when lines between liberals and conservatives were more fluid, or at least drawn differently.

Biographers are forever on the lookout for more obscure presidents, hoping to make the case that they are underrated. Eisenhower: Soldier and President by Stephen A. Ambrose, as well as Truman or John Adams by David McCullough, are examples.

Other writers don’t shy away from a new look at even the most famous presidents. David O. Stewart (a founder and past president of the Independent) last year published George Washington: The Political Rise of America’s Founding Father, which analyzes the often-overlooked political skills of the first president. And Doris Kearns Goodwin famously authored Team of Rivals: The Political Genius of Abraham Lincoln.

Andrew Jackson, currently fallen into disrepute not only because of his slaveholding but also because of his repression of Native Americans, was nonetheless the first president to be a Democrat (a party founded by his supporters). As David S. Brown puts it recently in The First Populist: The Defiant Life of Andrew Jackson, our seventh president was the first American leader to exploit the ambiguities of populism. Not surprisingly, Jackson has had numerous biographers, including the prolific Jon Meacham, with his American Lion: Andrew Jackson in the White House.

For better or worse, our presidents are pivotal in determining the United States’ destiny, and each presidential biography can help us more clearly understand the office and the nature of leadership.