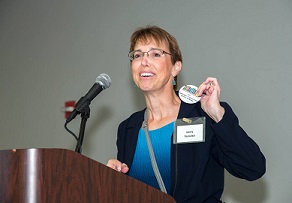 The glasses are empty, or mostly, and legs are outstretched as the conversation spools out. The party is nearly over, and the host looks on in satisfaction.

“We began to believe
the night would not end.
Someone was saying the music was over and no one had
noticed.
Then someone said something about the planets, about the
stars,
how small they were, how far away.”


That conclusion of Mark Strand’s poem, “The Late Hour,” captures that delicate sense of inevitability that human gatherings can have, as if there were nothing more natural than people coming together to share their lives and passions.

The host, however, knows that gathering all those lives into one place, feeding them and making them comfortable, is much more than a natural coincidence of people falling in together.

Writers conferences aren’t garden parties, but they are moments where humans who share a particular passion come together to enjoy and expand their experiences. And, like any large party, they take a lot of work to put together.

The Washington, DC, area is lucky to have a number of excellent local conferences for writers, and I talked to the organizers of two of them to find out why, in heaven’s name, they volunteered to take a chunk of their time, time that could be spent writing (or drinking or eating cake), to help others.

Jenny Yacovissi, a novelist and fellow Independent columnist, organized the last two iterations of the Washington Writers Conference. She was roped into chairing the conference by writer, consummate networker, and Independent board of directors member Gene Meyer, who charmed Jenny into agreeing to the two-year term. Jenny had the time and the passion, and she channeled them into two tremendous conferences.

I asked Dave how much time he spent organizing Conversations & Connections.

“I've never tracked how much time this takes exactly, and that's probably a kind of self-preservation instinct to just not think about it very much,” he said.

The conference does take a lot of time, though, starting about four months before the conference. At that point, they’re working to identify featured authors and pull together panels and workshops. Plus, of course, finding a site and sponsors.

The pace increases as the conference gets closer, Dave said, until it essentially becomes a second full-time job.

Both Dave and Jenny said they do the work because they believe in the mission and because they are buoyed by the relationships they’ve formed in the process.

“The conference is one of the funding sources for Barrelhouse and everything we do,” Dave pointed out. “That wasn't the impetus for starting the conference, to be honest, but it has become a reliable source of funding for us, and that's hard to come by for an independent literary organization.”

The Washington Writers Conference is also an important fundraising tool (benefiting the page you’re reading now), and Jenny believes passionately in writers helping writers build a community that fosters the intellectual and cultural life we want to live.

“It’s important for writers to get out and participate in the writing community,” Jenny said. “Chairing the conference was a significant way for me to do that.” (Jenny also wrote an excellent column talking more about the importance of volunteerism in the writing world.)

Both organizers talked about the jolt of energy they get from seeing people connect and get inspired about writing while at the conferences.

“This year, many of our [featured] authors spent most of the day at the conference, which gave the attendees more time to chat with them,” Jenny said.

She loved the excitement that seemed to build throughout the day, and she especially loved her own opportunity to interact. “For me, personally, the opportunity to introduce Alice McDermott, one of my all-time favorite authors, was a high point.”

“It was also the first time that I had ever really mingled with professional writers other than my instructors at Hopkins, and I remember feeling so intimidated. Everyone looked so cool. I'd just had my kids and was back in the writing program and it was nice to see professional writers who were parents, who had non-writing and non-teaching day jobs, to see that they weren't all in their 20s, too. To now be a featured writer is absolutely amazing and goes to show that this conference isn't just a conference but a community.”

It's a lot of work to build those communities, those conference rooms filled with name tags, tote bags, and literary dreams. We’re lucky people like Jenny and Dan create those spaces where writers can drain our coffee mugs and refill our wells of inspiration.

Carrie Callaghan is a writer living in Silver Spring, MD. Her debut novel, A Light of Her Own, is forthcoming this November. If you’re looking for an opportunity to volunteer with the Independent, we’d love to hear from you!