The Enduring Allure of Paris

Why the iconic French city looms so large in life and literature. 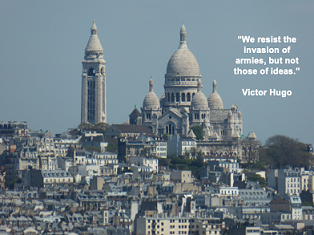 Paris — a city ingrained in our imaginations. A city that is both grand and lived in, a city of massive cathedrals and quiet neighborhoods, a city full of mystery and romance. The city of love, the City of Light.

Why have writers flocked to Paris for hundreds of years? A brief dip into history sets the stage. In the Middle Ages, the Catholic Church established schools attached to major monasteries to train scholars not only for the church, but also to serve in government. In the 12th century, King Philip II of France chartered the University of Paris. Latin was the language of instruction, which enabled the university to attract students from across Europe and gradually to become a renowned center of learning.

With so many gifted scholars on hand in the city, publishing houses, grand theaters, and literary salons soon followed. Over time, Paris became known as the intellectual capital of the world and the epicenter of cultural enlightenment. Even today, students from around the globe come to Paris to study, to live, and to fall under its spell.

Thomas Jefferson, who spent four years as U.S. ambassador to France, offered this reflection: “A walk about Paris will provide lessons in history, beauty, and in the point of life.”

In the early part of the 20th century, writers like Ernest Hemingway, Gertrude Stein, James Joyce, Vladimir Nabokov, George Orwell, James Baldwin, and Edith Wharton sought its inspiration. Wharton felt that, in Paris, an intellectual woman such as herself could have a voice. Of the city, she said, “I have it in my blood.”

Hemingway, who lived and wrote in Paris for more than six years, said, “Paris is so very beautiful that it satisfies something in you that is always hungry in America.” The poet e.e. cummings called Paris “a divine section of eternity,” while Harriet Beecher Stowe reflected, “At last I have come into a dreamland.”

James Thurber, noted cartoonist, journalist, and playwright, commented that “the whole of Paris is a vast university of Art, Literature and Music…it is worth anyone’s while to dally here for years. Paris is a seminar, a post-graduate course in Everything.”

More recently, Kristin Hannah, author of The Nightingale, had this to say: “I had forgotten how gently time passes in Paris. As lively as the city is, there’s a stillness to it, a peace that lures you in. In Paris, with a glass of wine in your hand, you can just be.”

My latest novel, Paris in Ruins, was sparked by the idea of taking a character from my earlier novel Lies Told in Silence back to a time when she was roughly 20 years old. I could have chosen some other French city, but when I discovered the momentous historical events that occurred in 1870, Paris was the only choice. In the story, Paris is a wounded soul struggling to survive invaders from without and within.

I love the city. A visit was a necessary part of my research process, and I spent three weeks exploring every arrondissement for clues to infuse my characters and the narrative with authenticity.

And what is it about Paris that engages readers? I asked that question recently and received many responses:

“Because I've always loved the way the city absorbs me into itself. I love the buildings and boulevards and parks created by Haussmann's vision, the remnants of the 17th & 18th centuries. The museums and galleries. The food and the fashion. The patisseries and boulangeries and bistros and cafes.”

“There is definitely something about Paris. The memories, the city, the history. It's a fascinating place…I love everything set in Paris.”

When people come across a novel set in Paris, said one reader, they “anticipate love, excitement, romance, fashion,” as well as beautiful sights, marvelous boulevards, and everywhere, the embrace of history. Paris is magic, a city unlike any other — or, as one friend said, “Just the idea of Paris makes me so happy.”

Several other readers spoke of Paris as a character in its own right. “Paris has a personality — she is a living being you can both love and honor.”

I’m sure each author who sets a novel in Paris brings this mindset to bear. It’s a city that still has the power to fill the soul and spark the imagination.

M.K. Tod writes and blogs about historical fiction. Her latest novel, Paris in Ruins, is available on Amazon, Kobo, Barnes & Noble,and Google Books. She can be contacted on Facebook, Twitter, and Goodreads, or on her website.