There’s nothing wrong with co-authoring a book — or taking over a series. 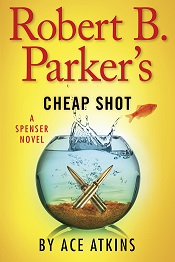 In last month’s column, I took a potshot at BookShots, the short novellas that James Patterson and his covey of co-authors is turning out like so much literary sausage.

I will let other people speak to their quality — you can read the reviews on Amazon — but I do want to make it clear that I have nothing against the co-authors, many of whom are struggling to make a living in a world that such mega-authors as Patterson and such e-publishers as Amazon dominate. (Notice I did not say monopolize; you will have to read earlier columns to see why.)

I also did not mean to tar other writers and their co-authors with the same brush. I picked on Patterson because he is on record as saying that his input into his “books” is minimal. It’s his name, or brand, if you will, that is crucial to his operation. And if that reminds you of anyone else on the current scene, so be it.

Other well-known writers who fully collaborate with their co-authors, and do an equal or large portion of the work, can only be admired and even encouraged.

There is another species of co-author that I also admire. Those are the writers who take over a series, usually a popular thriller series, after the original author goes to that great bookstore in the sky. Usually the author’s survivors, or estate, are behind such an arrangement, undoubtedly supported by the original author’s publisher. I cannot tell a lie: I have not read many of the zombie novels. At first, I had a visceral objection to people “cashing in” on a revered (at least to me) writer. And I was worried that the books would be rush jobs, badly written or poorly plotted.

I’ve since suppressed the snob in me (temporarily, I’m sure), and come to realize some things. Why shouldn’t an author’s family try to keep his or her memory going? Why, indeed, would I begrudge the family a continuing revenue stream? (I’m less sanguine about the publisher’s motives, but, hey, that’s free enterprise. I just hope they don’t take too big a cut from the family.) And why should devoted readers be cut off from the characters created by a beloved author?

As for the quality of the new novels, I have found the few I’ve read to be quite good in their way. I mean, no one can replace the James Bond of Ian Fleming (an underrated wordsmith), but established authors like John Gardner and William Boyd aren’t chopped liver, after all, and have given it a good go.

One author who has continued a revered series is very, very good. I speak of the wonderfully named Ace Atkins, one of his generation’s best crime writers. Atkins, who has been twice nominated for the Edgar (a crime fiction award) for his Quinn Colson thrillers, has also written five Spenser novels (Slow Burn, Kickback, Cheap Shot, Lullaby, and Wonderland.)

Atkins is no Robert B. Parker (even Parker wasn’t up to Parker snuff in his last few novels), but he’s damn close. I’m a Spenser nut, having read all 39 of the originals, some several times. So I think I know of what I speak. I just finished Slow Burn and was impressed. Atkins has the dialogue down and brings Spenser and his friends to life. That is not easy to do when dealing with someone else’s characters. But it doesn’t feel forced.

(Reed Farrell Coleman and Robert Knott have written “Parker” novels featuring Jesse Stone and other characters. Parker was nothing if not prolific. I can’t speak to their quality, since I have not read them.)

Now, unless Atkins and the other authors are using a Ouija Board, the work they are producing is their own. More power to them. But it raises an interesting question: At some future date, who will continue Patterson’s series? The mind boggles.

(Lawrence De Maria, once a Pulitzer-nominated New York Times reporter, has written more than a dozen thriller and mysteries on Amazon.com. His most recent mystery, Turtle Dove, is available at ST. AUSTIN’S PRESS (BOOKS BY DE MARIA).) Several people have suggested that they could write his books, but he ignores them.

The Language of Love

Why is writing about sex so hard, er, difficult?