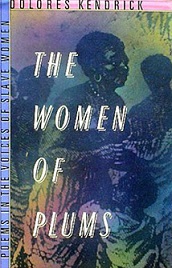 “Take this hot milk to Missus’ room and see if the two of them
start spelling’ things out again that they don’t want me to know.

Wants to know the baptism of words.”


That’s the end of Dolores Kendrick’s poem “Sophie, Climbing the Stairs,” in her collection The Women of Plums. The book is a chorus of voices from enslaved women, and that particular poem channels a 12-year-old girl learning to read and write, unbeknownst to her white owners. The “baptism of words” Sophie seeks is a bridge to some measure of empowerment and freedom.

Poets traffic in words even more intensely than their fellow writers, and Kendrick, who passed away in 2017, used her career to both inspire and empower. It seems fitting, then, that someone whom she inspired is now using her words to encourage fresh creativity in others.

Poet and Howard University writing faculty member Abdul Ali first heard of Kendrick when he was a student at Howard and she was poet laureate of Washington, DC — a post she held until her death.

“I was so mesmerized by how glamorous she was,” Ali says. “The couple of times I spoke to her [as a student], she seemed like a movie star.”

Ali learned Kendrick had a group of poets whom she informally mentored. He was an apprentice poet himself at the time, and his work came to Kendrick’s attention. Soon, as if in a fairytale, Ali found himself in the admired woman’s group.

From there, he was able to see her behind the scenes, and he loved watching how much attention she lavished on her poems.

“She wanted to dramatize the poem,” Ali says. Kendrick strove to bring poetry to life. “There’s a myth that poetry has to be difficult. Dolores is an example of how you can speak to heads of state or to the cleaning lady.”

As their relationship deepened, Ali came to believe Kendrick’s own city undervalued her, even while she was successful abroad.

“I started taking note of her details,” he says of Kendrick’s last years. “She enriched my life. I think her life kind of pushed me, and I wanted to make sure her life received the attention it deserved. So I went on a mission.”

After Kendrick’s death, Ali knew he wanted to do something to honor her. He put out a plea on Facebook to fellow MFA graduates, and an editor from the literary magazine Pleiades replied. The magazine would love to host a special tribute to Kendrick, the editor said, and Ali could curate the poems.

“It’s been magical,” Ali says about combing through the nearly 100 submissions he received, all reflecting or honoring Kendrick’s work in some way. Many of the submitters have been people whose lives were touched by Kendrick, who spent a career teaching in DC public schools and the private Phillips Exeter Academy before turning to poetry full time.

“She was a late bloomer in some ways — her first book was in her fifties, she became poet laureate in her seventies,” Ali explains.

I get the impression from talking to Ali that by volunteering his time to curate this poetry memorial, he is both repaying a karmic debt and trying to pay it forward.

“She was a quiet champion of my work,” he says. “She was a class act.”

It’s also clear that Ali is an evangelist for poetry in the same way Kendrick was.

“Poetry is about the living,” he says. “All of us have experienced life and death.”

The Women of Plums thumbs that line between life and death, both in concept (these are voices of long-dead women, yet their words are so very alive) and in execution. These enslaved women kill their babies to save them, or save their babies by threatening murder, or welcome death themselves.

By honoring Kendrick after her death, Ali is inviting us into that same conversation. There is a folding of inspiration and love here that I find beautiful. Ali has taken Kendrick’s hand, even after death, and reminded the world that her words have resonance.

That strikes me as the best gift one writer can give another.

Carrie Callaghan’s debut novel, A Light of Her Own, about 17th-century Dutch painter Judith Leyster, is forthcoming from Amberjack Publishing in November. Find her on Twitter at @carriecallaghan.