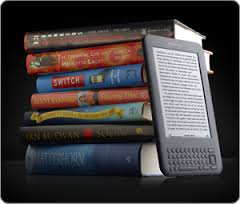 The New York Times recently ran a front-page article calling into question the growth of e-books. In it, the author suggested that traditional printed books were making a comeback at the expense of Amazon, which dominates the e-book landscape. The Times also said that the increasing numbers of independent bookstores is another sign that the e-book revolution is slowing. It quoted various booksellers and readers who said they preferred the feel of printed books over those on various tablets.

(I don’t doubt that; I have several e-readers but still enjoy reading the printed page.)

But the article was flawed because it only took into account the sales of the e-book versions of books also published in print. Those e-book sales may indeed be slipping, most likely because the so-called legacy publishers are keeping their prices relatively high.

For example, James Patterson’s latest novel, The Murder House, “written” with co-author David Ellis, is selling at Barnes & Noble for $17.13 in hardcover and $14.99 as an e-book on both the B&N Nook and the Amazon Kindle. For what amounts to a two-dollar difference, many people might indeed opt for the physical book.

But the great bulk of e-books are self-published. According to AuthorEarnings, a website that tracks all book sales, “Indie authors and Amazon-imprint authors sell more e-books daily than all traditional publishers put together, a remarkable fact that most industry observers — ourselves included — still find hard to believe.”

The website notes that publishing industry statistics from Nielsen, Bowker, and the like “all rely on counting ISBNs,” ignoring the fact that “37% of all e-books sold on Amazon.com each day do not use ISBNs.” This is significant because “according to most industry accounts, 65% of all US e-book sales happen through Amazon’s Kindle store.”

AuthorEarnings contends that while e-book sales of authors such as Patterson may be lagging, sales of self-published authors are exploding, as more and more millennials eschew print. It’s not hard to see why. It’s a matter of economics. While there is plenty of self-published dreck, there also are some fine — or at least readable — self-published books.

(Dreck, of course, isn’t limited to the self-publishing world; just check out any airport book kiosk.)

Dreckness aside, the typical self-published e-book sells for $2.99 to $4.99 on Amazon, earning royalties of $2.10 to $3.50, which are quite comparable to what a “traditional” author might earn after agents, editors, publishers, and other middlemen take their slice of the pie. (And self-published authors who participate in Amazon’s KDP Select borrowing program earn additional funds.)

Now, this is not to say that most self-published authors are making a killing. Very few (myself included) do. The Hugh Howeys, John Lockes, Amanda Hockings, and Joe Konraths in the Amazon million-seller universe are the exceptions. I’m sure Patterson and his covey of co-authors do much better than the typical Amazonian self-publisher.

I love print books, or I wouldn’t be writing for the Washington Independent Review of Books. I’m a big reader of nonfiction, and I find it hard to imagine enjoying their illustrations, charts, and graphics on anything but the printed page. The Battle of Gettysburg loses something on a Kindle.

I believe the literary world is big enough to permit both print and e-books to coexist. I also believe that the anti-e-book crowd does not give Amazon, in particular, and the e-book revolution, in general, enough credit for generating a new wave of reader enthusiasm.

Why do you think so many small bookstores are thriving?

Lawrence De Maria is a former journalist who still loves the New York Times, where he worked and was nominated for a Pulitzer, even when it occasionally gets the story wrong. All 14 of his thrillers and mysteries are available on Amazon.