An introduction to D. Selby Fing’s Perdition: Part One of the Profane Comedy. 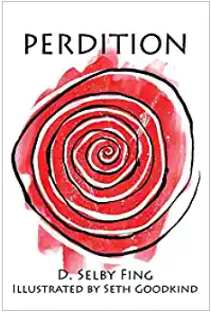 I am my father’s creation

I have lived my life to continue that creation

The vision for the Profane Comedy sprang from two sources, one, my father’s life, a bittersweet experience, and, two, his reading

Thomas Jefferson, Laurence Sterne, Frederick Douglass, Gertrude Stein, Michel Foucault, James Agee, among them, and most of all, Dante Alighieri

Fing was a synthesizer, a comprehensivist, like R. Buckminster Fuller, a melting pot of his own

D. Selby Fing was born in June 1941, while his father (Arpiar Fing) was stationed at Pearl Harbor, Oahu, Hawaii

Arpiar survived the December 7th Japanese attack, but was, ironically, killed the next day

Fing was sexually abused by the priests of his, Our Lady of Lourdes, parish in the Donato Roman diocese of Philadelphia

He never knew how to trust or love

He went to the seminary when he was 19 and had his first mental breakdown, what I now believe was borderline personality disorder, but he never received a diagnosis one way or the other

Society did not help him

He became a reader and he took on a profoundly secular outlook, rather like Walt Whitman, exaggerating himself into the Everyman of the United States of America

He could be grandiose

He hitchhiked all over America in the late 60s and early 70s, spending much time in the Southwest, Arizona, New Mexico, California, and northern Mexico

He was an elementary school teacher, but he never kept a job very long

He met his wife, Lilica Del Rio, outside Lordsburg, New Mexico, in 1965, as he was coming down from an epically bad acid trip and hitchhiking back home to Santa Monica from Chihuahua, Mexico; she was driving a beaten-up 1959 Chevy Biscayne, black hardtop

She was fleeing her hometown of Silver City, New Mexico, having been sexually abused by the priests in her family’s Saint Vincent de Paul parish of the Roman Catholic diocese of Las Cruces

They drove to L.A. together, lived apart as friends, and married two years later

Fing was a poet, with little faith in his work, or rather, he couldn’t bear interpretation of his work, even though he felt it was wonderful

Poetry was the only thing he could focus on that gave him any calm; words, sounds, rhythms, songs; he was an artist who didn’t know what he was

I am the younger of Fing and Lilica’s two sons

I was born in January 1973; my elder brother, who was also involved in the Profane Comedy project, was born in December 1969

We moved with our parents to Philadelphia shortly after I was born, and, except for his mind, my father ceased to be a wanderer

But he wasn’t domestic

Neither was my mother

I have few memories of those early days

Fing had been depressed through each of those final years, full moons being his worst time of the month

He hadn’t written much since the move to Philadelphia, and he was tormented about everything: his wife, his work, his children, his responsibilities, his failures

I remember him most as, and the few pictures I have confirm that he sure looked like, a hippie

But he didn’t hang around hippies, and his few friends were definitely not hippies, they were fallen Catholic artists, closeted gay men

Fing was not gay; these days, he’d be queer

The priests fucked him up

Sometime in mid-1975, Fing obtained a kind of clarity he’d never known as a writer, provoked by study of the Divine Comedy

He recognized that Dante intended to bring his reader to their own salvation, if they just read and understood his words

He saw Dante’s architecture on a smaller scale, laid over American history

He saw himself as the wanderer who needed instruction and guidance, and a school of ironic knocks, to achieve his own salvation, and to bring others on the journey with him

This was the great purpose of his life, this was the gift of all his suffering, the silver lining on the dark, charged, wet, cold clouds of his loneliness

I believe he found his salvation

On the night July 4th, 1976, he stabbed himself in the chest in a bathtub in our house, and died

I was 3-and-a-half years old

His mystery has occupied all of my life

This mystery was an obsession to my elder brother, who started the annotations to the Profane Comedy, and who struggled with his own mental illness before dying on the second plane to hit the World Trade Center on September 11, 2001

Therefore, I’ve contracted with a fine artist and historian from Seattle, Seth Goodkind, to imagine what those uncanny Fingian words actually look like

Anna Lawton and New Academia Publishing, with some divine intercession from Grace Cavalieri, have agreed the poem is worth bringing to the public

There are two more books of the Profane Comedy, plus an extended set of annotations (from D. Selby Fing Jr. and myself), and a book of short stories, which are based on Fing’s life, yet to be published

And I am writing and producing a song cycle, again with the purpose of bringing this amazing, bittersweet, insane, hopeful, allegorical journey to you

I believe it has as much meaning today as it did when it was written; and it’s good to achieve your salvation.

D. Selby Fing, D. Selby Fing Jr., and Y.S. Fing are noms de plume for a modest English professor and cultivator of spirit and intellect who prefers the distance of anonymity to whatever the other options are. He has been involved with the Independent since its inception.