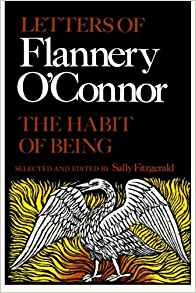 Grace
: mercy
: disposition to or an act or instance of kindness, courtesy, or clemency
: a temporary exemption: (in Christian belief) the free and unmerited favor of God, as manifested in the salvation of sinners and the bestowal of blessings


In late October, we were three women and a dog driving south of Charlottesville, past abandoned houses and modest farmland, to Norwood, Virginia. Our destination was the Porches, Trudy Dean Hale’s writer’s retreat that overlooks the quiet waters of the James River. DC’s Inner Loop founders, Rachel Coonce and Courtney Sexton, sat up front, while in the backseat, my thigh was the honored resting spot for the head of Courtney’s hound, Remy. “Travels with Remy,” my husband called it.

It was in the kitchen of the Porches that I discovered The Habit of Being: Letters of Flannery O’Connor. The one that struck me was a letter to “A,” and the subject was heroes and grace. I had come to the retreat to reflect on my own writing about how to create circumstances that make a character change.

Forcing the issue with a character who doesn’t seem to be ready can be hard to do when you believe that you are in the service of your characters, not the other way around. At the same time, there is your reader, who may find the predictability of a character tiresome.

In her April 4, 1958, letter to “A,” O’Connor refers to a conversion in her short story, “The Artificial N-----,” published in the collection A Good Man Is Hard to Find and Other Stories. In the story, Mr. Head takes his grandson, Nelson, from rural Georgia to Atlanta, projecting his own insecurities on the boy and treating him with derision as he simultaneously imposes his racism on the boy, pointing out people of color who the boy doesn’t even notice are black.

When Nelson accidently runs into a woman and breaks her ankle, his grandfather acts like he doesn’t know him. Theirs is a power dynamic that is exacerbated by this outing, and juxtaposed against Mr. Head’s lack of power in the unfamiliar city. When they move on, lost and thirsty, Mr. Head sees the boy’s “eyes were triumphantly cold…home was nothing to him.”

It is soon after that they find a lawn figurine, a replica of a jockey in the grass, with exaggerated features. In their common defeat [by the city], “they could both feel it dissolving their differences like an action of mercy.” The figurine brings them back together, as the grandfather says, “They ain’t got enough real ones here. They got to have an artificial one.”

Something unpredictable happens when they are safely on the train home. Mr. Head reflects that “his [own] true depravity had been hidden from him lest it cause him despair. He realized he was forgiven for sins from the beginning of time.” They agree never to return to the city.

“I think you are wrong that heroes have to be stable. If they were stable there wouldn’t be any story…the action of grace changes a character. Therefore in a story all you can do with grace is to show that it is changing the character…Mr. Head is changed by his experience even though he remains Mr. Head. Part of the difficulty…is that you write for an audience who doesn’t know what grace is and don’t recognize it when they see it.”

For O’Connor, this mystery of grace, set in contrast to the most flawed of characters, is the heart of fiction.

O’Connor was unusually intimate in her tone to “A,” whose letters do not appear in the book. We have only the one-sided correspondence. I was obviously curious about “A.”  Back in Washington, I looked her up and discovered “A” was the well-guarded secret name of Hazel Elizabeth Hester. O’Connor did know her, and had met her, and appeared to also protect her identity.

In a 2016 New Yorker piece by Nicholas Köhler, I learned that Hester was in the Air Force, stationed overseas, and lesbian. When she came out, in Germany, she was discharged with what was tantamount to a criminal record, and was only able to find a job in her former company in Atlanta. Hester drew out of O’Connor some of the most dazzling letters. She also kept up a riveting correspondence with the English writer Iris Murdoch.

She converted to Catholicism for O’Connor, although, a few years later, she rejected the church, perhaps because of Murdoch. Plagued through her life by thoughts of suicide, and traumatized by the witnessing of her own mother’s suicide at 14, Hester shot herself in 1998, when her identity was finally revealed to the public.

The thought of Hester in O’Connor’s life and correspondence sent me in search of another master of the short story, George Saunders. In his work, as in O’Connor’s, grace can be a release from shame. Saunders’ discursive style allows us into the inner dialectic of the character, heightening a lack of stability that, in the end, reveals people are basically better than you expect.

In the title short story of his collection, Tenth of December, a young kid is indulging his fantasy life on a jaunt in the woods, and, for a while, I had this sense of dread that he was going to do something terrible to someone.

Enter Don Eber, a very sick man who has set out to end it all. Eber heads into the cold, leaving his coat on a bench next to a frozen lake, only to have the kid, Robin, notice it. Robin picks it up and runs across the center of the lake to give it to him. The ice cracks, and Robin falls in. Mid-suicide attempt, Eber sees Robin in the water. What does he do?

Where O’Connor produces grace in spite of brutality, Saunders pulls us away from the brink of the brutal as if it is necessary for the writer to intervene and present us with an option for grace.

As a writer, I’m enthralled by this conjuring of grace, but why is it so hard to understand in tragedies like Hester’s? I found an unexpected clue when I came back to Washington. On October 30th, at Politics and Prose, I attended the launch of Timothy Denevi’s Freak Kingdom: Hunter S. Thompson’s Manic Ten-Year Crusade Against American Fascism. Thompson opposed unchecked power and brutality, although he stayed relatively neutral from partisan politics.

Thompson was beaten by police in Chicago during the Democratic Convention in 1968, in spite of waving his press pass at an officer. Anti-authoritarian, neither Democrat nor Republican, he ran for sheriff of Aspen, Colorado, where one of James Salter’s advertisements for him ended with “He wants too pure a world.”

Reflecting on Hemingway’s suicide, Thompson said, “I don’t claim to be invulnerable, but the one thing I insist on is that I can’t be croaked except when I give the word.”

Don Eber, the sick father and husband in George Saunders’ story, echoes Thompson’s desire to take control of his end. In 2005, Hunter S. Thompson shot himself, like Hester did.

It was in reading Denevi’s striking book and seeking out more about Thompson that I found another clue that resonated. In an essay written in 2014 on Thompson’s death anniversary, James Poulos said, “For thousands of years the basic idea of grace — secular or religious — has powerfully remained the same: you are free of the fears of this world. The fearful spirit says, ‘but I have to do this, under the circumstances!’ In the presence of grace, the courageous spirit testifies, as St. Augustine and John Lennon did, that we are the circumstances.”

Saunders’ story is interesting in how it delves into both sides of this puzzle. Eber is trying to control his end, but circumstances change when Robin falls in the lake. “We are the circumstances,” but “I have to do this, under the circumstances.”

The idea of controlling the story adds its own nuance to the deaths of Thompson and Hester, explaining some of the mystery about grace and the courageous spirit. For a fiction writer, it seems critical to decide whether a character will be the agent or just react to circumstances outside her control.

Either way, it is in the telling of the story, and the showing of a character’s insight into grace, that elevates O’Connor and Saunders’ fiction. It is when we enter into the inner world of their characters that surprise is delivered.

But, Tell Me, Where Do the Children Play?