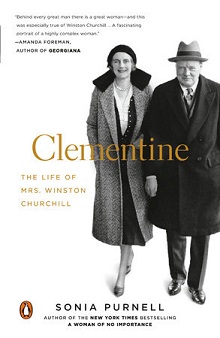 Most people agree that faith, hope, and charity are the cardinal virtues, but not Winston Churchill. He pronounced courage to be paramount “because it is the one human virtue that guarantees all the others.” Without his courage during WWII, Britain might’ve succumbed to oppression and tyranny, but by summoning his “blood, toil, tears and sweat,” the 65-year-old prime minister inspired his country — and ours, eventually — to fight to defeat the Nazi onslaught of terror.

“Success is not final; failure is not fatal,” he said. “It is the courage to continue that counts.”

Standing behind that monumental man was his courageous wife, Clementine, who sacrificed herself, her children, and, at times, her mental stability to be all that her husband required of a spouse, as well as a parallel partner in his success.

Sonia Purnell’s fulsome 2015 biography, Clementine: The Life of Mrs. Winston Churchill, does justice to the great woman behind the great man. In it, Clementine Hozier Churchill (1885-1977) emerges as “a terrible mother” but a devoted wife to her remarkable husband as the couple triumphantly surfed turbulent waves, politically and personally. So tempestuous was their marriage at times that Clementine, who suffered bouts of depression, once considered divorce. Another time, she attempted suicide, and in 1963, she was hospitalized and given electroconvulsive therapy.

Living with Winston Churchill, who seemed to thrive on commotion and chaos, took fortitude that Clementine could not always muster, which occasioned her numerous trips to spas and her many cruises and safaris and vacations without her husband. “[S]he may have spent up to 80 percent of their marriage without him,” said her daughter-in-law.

Nor was motherhood a loving refuge for Clementine. “Father always came first, second and third,” said Mary Churchill Soames, the youngest of their five children. Neither Clementine nor Winston spent much time parenting, and they sent their children to boarding school at an early age.

Their firstborn, Diana (1909-1963), married and divorced twice, suffered several nervous breakdowns, and took her own life a year after she started work for Samaritans, an organization devoted to preventing suicide. Their only son, Randolph (1911-1968), was “dangerously spoiled” by his father and, to his mother’s consternation, was drinking double brandies by the age of 19. Randolph gambled with abandon and lost frequently, but his father always paid his debts. Noel Coward observed that Churchill’s only son was “utterly unspoiled by failure.”

In 1921, the Churchills suffered parents’ worst nightmare when their 2-year-old daughter, Marigold, died of septicemia. Within months of the little girl’s death, Clementine became pregnant with her last child, Mary (1922-2014), who, according to Mary’s son, Nicholas Soames, “led a very distinguished life.”

Sarah (1914-1982), who became an actress, appeared in several movies, and was married three times. Following the death of her last husband, the only one of whom her parents approved, she began an affair with Lobo Nocho, an African American jazz singer, and was later arrested and jailed for drunk driving. During WWII, Sarah’s parents had encouraged her affair with Gil Winant, the married U.S. ambassador to Britain, as part of what Purnell calls “Operation Seduction U.S.A.” The prime minister and Clementine did anything and everything they could to endear their country to America and persuade the U.S. to join an allied effort against the Axis.

To that end, the Churchills also facilitated the love affairs of their daughter-in-law, Pamela Digby Churchill, who lived with them during the war while Randolph was fighting abroad with the Fourth Hussars. With their approval, Pamela ardently pursued the CBS newsman Edward R. Murrow, whom “Winston had long since identified…as the conduit to the hearts and minds of US popular opinion.”

The prime minister also turned Pamela loose on American envoy W. Averell Harriman, who would become her third husband decades later. Clementine could not abide the humorless Harriman, “who flaunted his wealth and connections, oiling his way from one grand cocktail party to another,” but tolerated him because he was vital to the war effort.

Churchill himself spent immense time and energy befriending Franklin Delano Roosevelt, despite the fact that, according to Purnell, the U.S. “had been miserly in its support for the last democracy in Europe to hold out against fascism.” One of the saddest passages in the book is FDR’s cold dismissal of Churchill’s affection and admiration, which never dimmed — even after Tehran in 1943, when the U.S. president “clearly chose Stalin over Winston, finding it ‘amusing’ when the Russian leader bullied his British ally.”

“My father was awfully wounded,” recalled daughter Mary. “For reasons of state, it seems to me, President Roosevelt was out to charm Stalin, and my father was the odd man out.”

Clementine’s life was wrapped in the vibrant colors of her 56-year marriage to Winston, who died at the age of 90 in 1965. “His towering reputation across the globe was secure,” writes Purnell, in no small part because of his wife. When she placed her funeral bouquet at Bladon, the parish church near Blenheim Palace, the Churchill ancestral seat, she whispered: “I will soon be with you again.”

Four months later, Prime Minister Harold Wilson made Clementine a life peer in her own right as Baroness Spencer-Churchill of Chartwell. She proudly took her seat in the House of Lords and voted in favor of a bill abolishing capital punishment.

Although she outlived three of her children and had to sell a few of her husband’s paintings to support herself, she no longer suffered from depression or needed electroshock therapy. She lived well in London, going to the theater, attending galleries, and seeing friends. Clementine died at home at the age of 92, secure in her place alongside her husband’s monumental legacy.