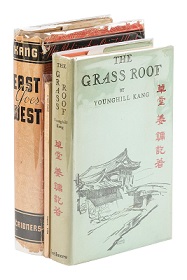 As a deracinated Korean-born child adopted into a white family, there are a lot of books that I read as an adult that I wish had been available to me growing up, such as translations of Korean authors and the works of Korean American essayists and novelists. None of these books existed when I was a voracious young bookworm who read to escape the awkwardness of my perpetual outsider existence.

There was one Korean American novelist I could have read, Younghill Kang, published in the 1930s by Scribner’s legendary Maxwell Perkins, editor to Thomas Wolfe (who brought Kang to Perkins’ attention), Ernest Hemingway, and F. Scott Fitzgerald. But alas, by the time of my youth in the 1980s, Kang’s two published novels, The Grass Roof and East Goes West, were out of print.

Like many Americans of my era, I got my first glimpse of Asian culture through the books of Pearl S. Buck. While empathetic and with a tender regard for her subjects, Buck was a westerner writing about a foreign culture, and her books suffered from the taint of Orientalism. (I still own a copy of her children’s book, The Chinese Children Next Door, illustrated with perpetually smiling Chinese people with dashes for eyes.)

Eventually, well into adulthood, I found Chang-rae Lee’s Native Speaker, published in 1995. But by then, I was much more familiar with Japanese and Chinese diaspora literature, as well as Japanese and Chinese culture. It wasn’t until recently that I learned about Kang, the first Korean American novelist, when his second novel, East Goes West, was reissued by Penguin Classics. I wanted to read The Grass Roof, set in Korea, first. That book is out of print, selling for $150 on the internet. Most extant copies seem to reside in research libraries; my husband found the copy I read at the university where he teaches.

The Grass Roof is a Korean bildungsroman written in the Perkins-inflected muscular prose of the 1930s, glazed with the nostalgic patina of an adult looking back on a vanished world. It is an eastern story told in western form but without the condescending judgment of the white gaze. In short, it is an incredibly accessible portrait of the proud Korean nation at its twilight, under the yoke of an ever more brutal Japanese colonialist government and severely constrained by the Confucian tradition.

(The text itself is unfortunately subject to the white gaze, rife with incorrect grammar, such as the plural use of “dirts” and “dusts,” that the editor must have thought added Oriental flavor. It’s a shame because there is no mistaking the authenticity of the voice and the perspective. But white people gonna white people.)

The protagonist is Chungpa Han, the only child of the head of an illustrious clan of scholars and poets. Like Korea itself, the family was once great but has fallen on hard times, and Chungpa’s father works hard to keep everyone clothed and fed:

“This village where I was born — Song-Dune-Chi, or The Village of the Pine Trees — was made up entirely of my own relatives, a clan by the name of Han, who were ruled by rational ideals which had been handed down from father to son for innumerable generations.”

Chungpa has an idyllic childhood in the isolated village, but he yearns for more. Incredibly precocious, he sees that Korea’s dedication to Confucianism — reflected in his own father’s refusal to let him learn western subjects — is what makes Korea the vassal to Japan, which has embraced western technology:

Defying his father, Chungpa leaves for Seoul when he’s 11, walking the 1,000 lis (approximately 300 miles). There, he manages to enroll in a Japanese school where he can learn western knowledge. He also tries to ingratiate himself with Christian missionaries, knowing that they are his only hope for getting to America, closed to all Asians by the Johnson-Reed Immigration Act of 1924, but they see through his false proclamations of Christianity.

Exposed as an anti-Japanese agitator, Chungpa is expelled. With no other opportunities to study in Seoul, he stows away on a ship to Japan, where he gets a job, enrolls in high school, and has many excellent adventures. While he relishes life in Japan, where “the future leaders of the Orient were being educated,” he never loses his pride in being Korean or his deep-seated prejudice against the “Japs.”

It was while reading the passages that boasted of Korea’s outsized cultural contributions where I felt most acutely my own loss. Raised in an America totally devoid of Korean culture, I seized upon what was available to me — Chinese and Japanese culture — as my own. I devoured the Japanese authors who were popular at the time, Yasunari Kawabata and Yukio Mishima; I studied Mandarin in high school and spent a semester in China; I found comfort in egg drop soup and moo shu pork. I unquestioningly believed that China and Japan originated all East Asian culture.

Kang’s novel, with its abundant examples of Korean erudition and rich cultural traditions, would have disabused me of that notion. He includes translations of many poems and songs, writes of Korean novels such as Story of Spring Perfume and Master Plum (deemed obscene by American missionaries), tells of esteemed calligraphers and artists, describes Korea as the origin of ceramics, and provides many other examples of its creative achievements.

Kang’s pride in Korea and disdain for Japan is so passionate and convincing that, had I read him as a kid, instead of growing up thinking that Korea was a tonsil in the maw of Asia, I would’ve known it was the tongue, giving expression to a continent.

Though incredulity may be strained by such a young boy making his own way in the world, the novel is based upon Kang’s own remarkable life. At last, he manages to talk his way into accompanying a returning missionary and his family back to America. Instead of leaving a hero, though, “I stole away silently as from the tomb of an Ancestor, without making any noise.”

He’s leaving a country that is a shadow of its former self, steeped in the past and under the dominion of an inferior people. “My grandmother died by the hand of the foreigner. The soul of my crazy-poet uncle was completely broken. My childhood friends I had grown away from, and the friends of my first manhood were exiled in body or spirit. In my short eighteen years, I had seen the disintegration of one of the first nations of Earth.”

The book ends on a sentimental note, as Chungpa sails toward America, turning his keen eye on the ship’s passengers, wondering what awaits him in the U.S. and romanticizing a young woman of indeterminate origin. “Her eyes too are on the far off stars.”