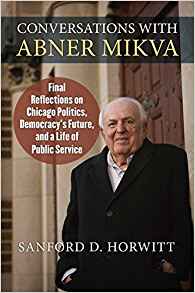 The Land of Lincoln has produced giant oaks in the political forest, none more majestic than Abraham himself. But other impressive Illinois timbers have continued to flourish throughout the years: Governor and U.N. Ambassador Adlai Stevenson; Senator Paul Douglas; Supreme Court Justice Arthur Goldberg, also secretary of labor and U.N. ambassador; President Barack Obama; Senator Dick Durbin; and the man fondly referred to in this book as “Ab.”

For those lucky enough to have known Abner Mikva during his long and productive life — Illinois State House (1959-1969), U.S. House of Representatives (1969-1973 and 1975-1979), U.S. Court of Appeals for the District of Columbia (1979-1994), and White House counsel to President Bill Clinton (1994-1995) — Conversations with Abner Mikva: Final Reflections on Chicago Politics, Democracy’s Future, and a Life of Public Service by Sanford D. Horwitt will be a treasure.

And for those who never knew Mikva but welcome a dose of progressive grace and political grit, it will be a sterling reminder of what public service once looked like, when integrity was the coin of the realm.

During the last three years of his life, Mikva, who served in all three branches of the federal government, met monthly with Horwitt, his good friend and former speechwriter, to reflect on the life he had lived at the center of power. Horwitt’s smart questions and Mikva’s unvarnished answers provide an incisive primer on politics, particularly the chapter dealing with Mikva’s nomination to the U.S. Court of Appeals for the District of Columbia, when he was targeted by the National Rifle Association (NRA).

Having been an advocate for gun control all his life, and a sponsor of legislation calling for a ban on the manufacture, importation, and sale of handguns (except for police, military, and licensed pistol clubs), Ab was anathema to the gun lobby, which distributed sporting charts for rifle practice with a bull’s-eye in the middle of Mikva’s face.

The behind-the-scenes story of how he defeated the NRA to be confirmed by the Senate should be a master class in political science. Although he was confirmed 58-31, he never forgave the NRA Democrats, all afraid of the NRA, who voted against him.

Being from Chicago, Mikva was not naive about political corruption, which is why he took such a hard line on white-collar crime and felt it should be punished with time behind bars, not simply huge fines. “If we’re going to have jails it makes much more sense to use them for white collar crime. That’s where the punishment angle, the humbling angle” comes in.

He found the case of Virginia’s former Republican governor Robert F. McDonnell to be particularly egregious, and felt that McDonnell, who was found guilty by a federal jury of political corruption for accepting lavish gifts, including a $6,000 Rolex, “should get at least five years” in prison, “and as far as I’m concerned, ten would be a good number.” McDonnell was sentenced to two years but appealed his case to the Supreme Court, which unanimously vacated the conviction.

The subject of white-collar crime led to conversations about the subprime mortgage disaster of 2008, when no senior executive from Wall Street or any of the big banks was put on trial. Here, Mikva chides Obama’s Justice Department under Attorney General Eric Holder:

“[W]hen it came to civil justice, as far as [Holder] was concerned, you don’t send white-collar criminals to jail. That’s not nice…They don’t do things like that at Covington & Burling [Holder’s law firm], a white shoe firm where the notion of sending executives to jail was unheard of.”

Nor does he hold back on his old friend Barack Obama, with whom he campaigned in 2000 when Obama made his first run for political office and lost:

“He was…dreadful on the stump. I went with him to several places. One was a black church, and he was awful. He was a dull University of Chicago professor lecturing the unwashed, who couldn’t be less interested…But he realized out of that very disheartening loss that you’ve got to show them, you’ve got to be a showman. Boy, did he learn.”

Mikva gives the young man he mentored “a low A” as president and feels Obama will go down in history as one of the greats.

President Bill Clinton does not get the same high marks from his former White House counsel, who was disappointed when “Slick Willie” interrupted his presidential campaign to fly to Arkansas to sign execution orders for a mentally incapacitated man:

Mikva also faults Clinton’s support of habeas corpus, prayer in public schools, and the amendment to prohibit flag-burning. “His instincts were to stay with God…He had been educated on the separation of church and state at Yale and Oxford, but those weren’t his views. On these God and flag issues he was Arkansas through and through.”

In 2014, President Obama gave his mentor the Presidential Medal of Freedom, an honor Mikva shared that day with, among others, Meryl Streep, Tom Brokaw, and, posthumously, the three civil rights workers who were murdered in 1964 — James Chaney, Andrew Goodman, and Michael Schwerner. “They got the most sustained applause,” said Mikva. “They deserved it.”

Abner Mikva, who died on the Fourth of July in 2016 at age 90, had a worthy Boswell in Sanford Horwitt, and both deserve a standing ovation for this book — a superbly written history of a man who believed in public service and practiced it, becoming a hero to many.