Why manuscripts have so much muscle. 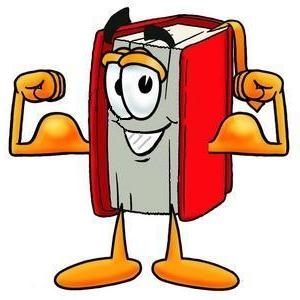 Shortly after our hairy and smelly ancestors climbed down from the trees, they discovered that long pieces of wood tipped with sharp points not only discouraged saber-tooth tigers, but also put woolly-mammoth meat on the table (where there were more empty seats, since the uncooperative mammoths often stepped on the hunters).

The more literate among the un-stomped cavepersons (although they couldn’t have known they were literate since the word hadn’t been invented) soon found out that by dipping smaller versions of those sharp points in a liquid — probably mammoth blood — they could start writing books.

(I’ve skipped over cave paintings as a storytelling medium, mainly because they were probably done with fingers, which annoys the hell out of me since they are much more sophisticated than anything I can do 30,000 years later.)

The first books were nonfiction. With a lifespan that didn’t extend much past puberty, most people didn’t have enough experience to make up stories. How can you write about all the problems you had growing up when you didn’t? A little-known fact: Only one in 10 cave-teens even made it to the senior prom.

But once people started living long enough to remember how rotten life was — Dad invented wine and was drunk every night; Mom ran off with the camel driver; my boyfriend slept with that tart from the next-door cave — novels were invented. Not long afterward, the ancients discovered plots, and promptly used up all the good ones even quicker than they exterminated the unfortunate mammoths.

I’ve previously noted in this space that plotlines have since been in a bit of a rut. I posited that most of the good storylines (murder, love, incest, matricide, etc.) were developed by the Romans, and before them, the Greeks, and only refined by such Johnny-come-latelies as that Shakespeare fellow.

But novels have persevered, to the point where trees were in danger of becoming as extinct as a hirsute elephant, at least until the Kindle came along.

Did you know that books helped us win World War II? No, really. I’m not making this up, unlike most of the previous paragraphs.

One of the books I am now reading is Molly Guptill Manning’s wonderful When Books Went to War: The Stories That Helped Us Win World War II, which describes how American librarians, outraged by Nazi book-burning, sent 20 million hardcover novels to the troops at the outset of our involvement in the war in 1941.

Many of the books were classics, including The Great Gatsby (which Molly notes was “rescued from obscurity” by the program). The government quickly recognized the morale-boosting implication of the initiative and, with the help of the publishing industry, jumped on board.

Those in charge, however, didn’t want GIs jumping out of planes or landing craft burdened down with Gone with the Wind and other massive tomes, so they provided soldiers with 120 million Armed Services Editions (ASEs), small paperback copies of the approved books (thereby basically creating the paperback industry!).

Thus bucked-up with the written word, our ASE-armed soldiers beat the pants off the Axis. (An aside: I was multitasking last night, reading about those rotten Nazis, when a documentary about German wartime aggression came on TV. Two hours later, I had this incontrollable urge to annex the Rhineland.)

I wish I’d known all this when a Marine sergeant named Tarver upbraided me for reading in my bunk. He said, in effect, that while books were nice, they didn’t win wars. I actually don’t think he used the word “nice,” and since he wanted me to clean the latrine, I’m sure the fate of the Republic was not at stake. I was incensed, which explains how I can remember his name so many years later.

Guess what, Sarge? Books do win wars. At least the ones worth fighting.

Lawrence De Maria, a former Pulitzer-nominated New York Times journalist, has published 11 e-books on Amazon.com. His latest thriller, featuring Manhattan private eye Jake Scarne, was due out this past Christmas. It will be a week or two late, mainly because of Christmas.

Is it finally time for me to write a memoir?

All Politics Is Vocal

How to be (effectively) outspoken on paper.