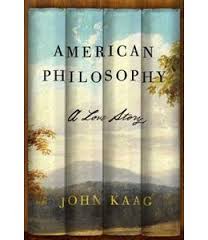 It is rare that I will read a review in the New York Times Book Review and feel compelled to immediately get that book. It is even rarer that I will be interested in a memoir. Trendy as they are, they generally hold little appeal for me.

But the Nov. 6, 2016, review of John Kaag’s American Philosophy: A Love Story sent me scrambling to the bookstore, and to suspend all other reading as I ripped through it.

Reviewer Mark Greif praised “this unusual work” by Kaag, a professor at the University of Massachusetts Lowell, for its deft interweaving of a survey of American philosophy with a memoir of a personal crisis amid a failing marriage.

But it is the setting for this crisis — an abandoned library in New Hampshire’s White Mountains — that steals the show and gives this book such a sharp focus in time and place. For it is the personal library of Harvard philosopher William Ernest Hocking, housed in a rotting, standalone building where rare first editions inscribed by some of the country’s greatest luminaries are exposed to mold and rodents.

I majored in philosophy as an undergraduate, but what appealed to me in particular was that Kaag had written his dissertation on the philosopher Charles Sanders Peirce, a founder of American pragmatism and semiotics.

I’d bet that 99.9 percent of Americans have never heard of Peirce, but I had the good fortune of taking James Collins’ course in Modern Philosophy at St. Louis University. Collins, a brilliant historian of philosophy, devoted the better part of the semester that year to Peirce, his haphazard career, and his “ugly duckling” neologisms as he blazed a new path in philosophy.

Kaag dwells on Peirce, but skims through the full gamut of American philosophers — Ralph Waldo Emerson, Henry David Thoreau, William James, Josiah Royce, John Dewey, and innumerable others — as he catalogs these abandoned books in order to find a home for them. And not just Americans, but the various European and Asian thinkers who influenced them and whose works are also found on these shelves. He traces how they led up to Hocking, and why this philosopher – who, dying in 1966 at the age of 93, bridged the past and present — would have these works.

In between, Kaag describes how the library, discovered by chance as he was on the way to prepare for another dull philosophical conference, provided him with a sanctuary as his marriage disintegrated and he coped with the hollowness in his life.

He had fallen in love with a married colleague and eventually recruits her to aid him in rescuing the library. Not for nothing does he subtitle the book “A Love Story” and focus in his biographical sketches of the philosophers on their own extramarital dalliances (some of them, fittingly enough, Platonic).

Philosophy, in short, helps him piece together once again the meaning in his life, and that, in Kaag’s view, is what it should do. He bemoans the fact that philosophy has become largely a dry academic discipline, discussed in arid conference rooms, rather than a passionate debate about the meaning of life carried on in the open air of a mountain hike, as it was with William James and his contemporaries.

Kaag skillfully guides the reader from lonely isolation of Descartes’ “I think, therefore I am” in the 17th century to Alfred North Whitehead’s cheerful “Hang it all. Here we are!” and the search for life’s meaning in our interconnectedness. He personally retraces the pilgrimage from Emerson’s “self-reliance” to Thoreau’s “self-cultivation.”

Philosophy gives meaning to the most mundane of activities, as when Thoreau praises walking for bestowing the great gift of time. “For Thoreau,” Kaag writes, “walking is not something one has to do. It isn’t a great test of will, but walking with care requires an attention to the present that is extremely difficult to maintain.”

Thoreau thought of walking as a saunter, from the French for holy ground, sainte terre. “The point of walking,” Kaag says, “was to move in such a way as to make, or keep, the land holy. The destination was pointedly unimportant.”

Hardly anyone just takes a walk anymore, and if forced to walk, would not be caught dead without earbuds piping in music, or audiobooks, or podcasts — anything but indulging in a quiet moment of reflection.

Ultimately, though, philosophy’s objective is much more ambitious. It is, Kaag says in discussing the French existentialist Gabriel Marcel, all about the exploration of freedom and love. “For Marcel, those were the two quintessential mysteries of the human condition.” Philosophy doesn’t provide the answers, Kaag says, but it deepens our understanding of the mystery of our existence.

These are grand concepts and not always easy to grasp in the abstract language of philosophy. For many, it is easier to plumb the drama of human existence in a work of fiction, or those works of nonfiction — even memoirs — that offer flashes of insight.

For me, however, Kaag’s cogent summaries of these great philosophers took me back to the heady intellectualism of college. I can’t say I’ve read a great deal of philosophy in the intervening years — or “philosophized” in any formal sense — but I do think that study has made me a more thoughtful person.

Kaag’s book is an excellent primer for anyone who wants to dip a toe into philosophy. And while Peirce may be forbidding for the novice, the great American triumvirate of Emerson, Thoreau, and James remains eminently accessible. Kaag’s book has prompted me to blow the dust off my Modern Library edition of The Essential Writings of Ralph Waldo Emerson, as well as the Library of America collections of Thoreau and William James, and place these volumes near at hand to rediscover.

When it comes to launching books, timing is (apparently) everything.