Titles and descriptions in honor of Asian/Pacific American Heritage Month. 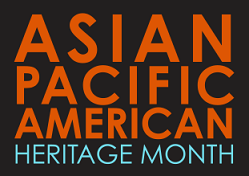 Just in time for Asian/Pacific American Heritage Month, Congress has passed a bill that eliminates the words “Oriental” and “Negro” from federal law. It may seem like a small thing, but it’s not. Words matter. The history and intent behind words matter. By purging words that have been used to oppress minorities, the government signals that it views all citizens as equals, and that minority groups are allowed to choose their own labels, rather than have labels imposed on them.

The U.S. government has not always acted so kindly toward Asian immigrants. In honor of Asian/Pacific Heritage Month, here is an extremely brief history of Asian immigration to the U.S., paired with readings.

The first to make the journey across the Pacific were primarily from the crowded southern coast of China. They helped settle the west by laying track for the transcontinental railroad, mining for gold, providing farm labor, and furnishing menial services for the burgeoning populace of the fast-growing cities.

When some gained success and didn’t return home, the government began devising ways to discriminate against them, as meticulously detailed in Three Tough Chinamen by Scott D. Seligman. The author documents the struggles of three early leaders in the Chinese-American community who refused to submit to unequal treatment, pursuing U.S. citizenship despite the obstacles in their way, such as the 1882 Chinese Exclusion Act, which closed the door to Chinese immigrants and made those already in the U.S. ineligible for citizenship, and the 1888 Scott Act, which prohibited Chinese who had returned to China from re-entering the U.S.

Keeping out the Chinese did not obviate the need for cheap labor. California was rich in farmland, and men flocked from Japan to earn their fortunes in the fields. They were met with a rising tide of intolerance, leading to the passage of the Immigration Act of 1924 which excluded ALL Asians from immigrating to the U.S. However, the government recognized that those Japanese laborers who were already in the country lacked prospective brides (they certainly couldn’t marry whites, duh; there were laws against that) and allowed the men to send for Japanese brides.

Their stories are told in Julie Otsuka’s National Book Award-winning novella, The Buddha in the Attic, which illuminates the suffering and joy of the picture brides’ hardscrabble lives. Leaving their families and homes for unknown shores and husbands, they discover that what awaits them is not what was promised, but a life of toil and hardship eking out a living, raising foreign children, and then losing everything they had worked so hard for when they are herded off like livestock to internment camps.

The mass internment of American citizens was made possible by President Franklin Roosevelt’s Executive Order 9066, which mandated the removal of all those regarded as a threat to national security from military areas. That vague designation applied to people of Italian and German descent as well, but it was only the Japanese-Americans who were rounded up. For an examination of the struggle of young Nisei (the American-born children of Japanese immigrants) to reconcile loyalty to their country with the cruel and unconstitutional treatment to which they were subjected, read Dear Miss Breed by Joanne Oppenheim. Their sense of betrayal and bitterness, as well as their optimism and abiding belief in America, is movingly depicted through the Niseis’ own letters, published writings, and oral histories.

Not all Japanese-American internees were reconciled to being deprived of their civil rights, though. The story of one such American is portrayed in John Okada’s No-No Boy, a seminal work of Asian-American literature, which follows a young man as he returns to his hometown of Seattle after serving time in prison for answering “no” to two questions on a loyalty survey. Okada’s novel offers a compelling portrait of those American citizens who rejected the country that rejected them, and explores how the Japanese-American community adjusted to life after the internment camps.

It was not until the passage of the Immigration Act of 1965 that Asians were once again allowed into the U.S. Three years after that, I came from Korea, gaining American citizenship in 1971. Mine is a different kind of immigrant story, as I was adopted into a Caucasian family. The only Asian in my D.C. suburban neighborhood, I got my first Asian classmate in sixth grade. There was a mere handful of Asians in my graduating class at a local public high school.

Many of the first Asians allowed in after 1965 were fleeing countries that were the battlegrounds of the Cold War: Korea, Vietnam, Laos, the Philippines. This year’s Pulitzer Prize for fiction went to The Sympathizer by Viet Thanh Nguyen, a Vietnamese refugee who came to the States in 1975. His intricate, powerful novel plumbs the duality inherent in human nature, the complicated truths that muddy politically expedient black-and-white narratives, the devastating effects of American interventionism, and the plight of the immigrant who can never fit in.

That feeling of alienation persists even in the American-born children of immigrants, as perfectly captured by Chang Rae Lee’s novel Native Speaker. Hired to spy on a rising Korean-American politician, the protagonist confronts his tangled identity by comparing himself to his hard-working and emotionally distant father, examining the wreckage of a failed marriage to a white woman, and wrestling with his admiration for the very man whose career he is secretly seeking to sabotage.

Missing from this extremely brief history are the stories of Pacific Islanders, south Asians, Filipinos, and many others. I’d love to hear your suggested books on the Asian-American immigrant experience.

We Need More Reviewers of Color

My year in book reviews, plus an important PSA.