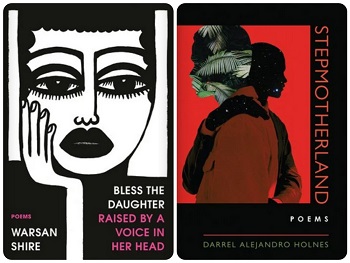 February is a strange month. It’s our shortest, and one fraught with the tension between winter and spring. It is also Black History Month, and as with other dedicated timeframes to “celebrate” a particular marginalized culture, I find it a double-edged blade because it still entails the majority doing the framing of how/what we learn, and it allows for further tokenization.

After all, it’s an opportunity for people to tick a “representation” box and blithely continue not reading, learning from, listening to, or supporting marginalized people the rest of the year. This is why the work of antiracism and decolonization is difficult: It is ongoing and always in motion.

I cannot speak for Blackness or Black poetry, for I am not Black. My responsibility as a Latinx with white privilege is to make space for Black people wherever I can, including in this column. If you read it regularly, you might notice I usually include at least one collection (if not more) by a Black poet each month because just as our cultural experiences are not a monolith, neither is our poetry. And like Blackness itself, Black poetry is beautiful, varied, and often ground-shakingly powerful.

It is part of our job as readers of poetry to experience as much of the spectrum as possible. We are taught to place chains upon Blackness in our own minds, to render ourselves blind to the beauty of Blackness and Black people.

Or, when we do acknowledge that beauty, we siphon it through the restrictive lens of oppression. So let us instead welcome the opportunity to honor Blackness and Black poets as Lucille Clifton does in her poem “won’t you celebrate with me”:

won’t you celebrate with me
what i have shaped into
a kind of life? i had no model.
born in babylon
both nonwhite and woman
what did i see to be except myself?

If you’re a Beyoncé fan, you might already have encountered Warsan Shire’s poetry via the Lemonade visual album (it’s no small feat to be on one of music’s biggest star’s radar). Shire’s first full-length collection, Bless the Daughter Raised by a Voice in Her Head, is a journey through her Somali culture, faith, family, history, and awakening womanhood, often seen through the filter of modern pop culture and music.

The collection also seeks to embrace the poet’s own Blackness as beautiful. The poems here are often short but pack a powerful punch and reveal a maturing talent that is already a reckoning. Shire’s depiction of the refugee experience is particularly affecting, especially in light of the ongoing U.S. policy to deny refugee status to so many, including, most recently, Haitians. In the poem “Home,” Shire writes, hauntingly, “No one leaves home unless home is the mouth of a shark.”

In “Assimilation,” the refugee speaker uses the metaphor of the unpacked suitcase to capture the sense of no longer possessing home or being able to settle in a permanent state. Instead, home can now only be carried within the body and memory:

“The refugee’s heart has six chambers./In the first is your mother’s unpacked suitcase./In the second, your father cries into his hands.”

In “Drowning in Dawson’s Creek,” a reference to the early 2000s teen TV drama, Shire wields the persona poem like a whip to strike at the dark heart of white supremacy and the learned need to define the Black self through whiteness. Speaking through the voice of a Somali woman murdered in 2010 and misidentified as “Caucasian Jane Doe” due to the length of time her body was in the water, Shire writes, “When I was twelve or thirteen and mad/with loneliness, I dreamt of white boys and/ladders leading to bedroom windows.”

In “Bless Your Ugly Daughter,” Shire further probes the colorism that pervades every community, even her own, as the speaker seeks to subvert the shame of being considered too dark and remake it into something powerful:

“Your daughter’s face is a small riot,
her hands are a civil war,
she has a refugee camp tucked
behind each ear, her body is a body littered
with ugly things
but God,
doesn’t she wear
the world well.”

It’s a delight to hold Darrel Alejandro Holnes’ debut full-length collection, Stepmotherland, in my hands, since he a fellow poet from the Panama diaspora and there aren’t that many of us being published (yet!). It’s especially meaningful that his work encompasses his Blackness as both a Latinx immigrant and a queer man.

Like Shire’s collection, Stepmotherland is mostly rooted in narrative, but Holnes deviates to powerful effect. In “Scenes from Operation Just Cause,” a play-like structure is used to frame into scenes the U.S. invasion to depose Manuel Noriega. The first “act” is what Holnes’ frames as “EXTERIOR: U.S. INVASION OF PANAMÁ 1989.” It begins by referencing the bombing but then turns the lens backward and outward to when the land itself first came to be: “the last time the land shook,/it was emerging from the water./Trémulo, trémulo, moviendo la tierra.”

He then moves the second act to the “INTERIOR – Home – Night – 1989,” where the speaker’s family huddles during the attack and a child’s cheek is cut open by flying debris. The boy asks, “Are the good guys here to get the bad guys, mommy?” The mother responds, “Let’s hope.” That ambiguity is key to the poem’s tension and works perfectly.

Holnes’ also deftly addresses the complications of cultural differences among members of America’s Black and Latinx communities in poems such as “OTM or Other Than Mexican” and “Tú.” In the latter, he uses a Shakira song as a vehicle to portray the speaker’s wish that the desire she feels for her partner not be complicated: “devour my body as you need,/breaking into the garden,/past the wall that keeps our home countries, my Panamá/your Rwanda, out on the other side.”

And in “Af·ri·can-A·mer·i·can·ize,” Holnes uses a dictionary-esque form to define, contextualize, reclaim, and celebrate the individual rather than the presumed monolith: