No Rest for the Wordy

Writers are never really off the clock. 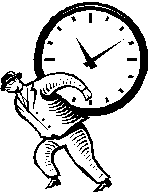 Pasted above my computer desk is a quote attributed to Eugène Ionesco, the renowned Romanian-born playwright: “A writer never has a vacation. For a writer, life consists of either writing or thinking about writing.”

Although much of what Ionesco wrote and said must be taken with a grain of salt – he was, after all, a member of the so-called Theatre of the Absurd, a group of writers concerned with the meaninglessness of existence – he hit it on the head.

I know this sounds self-serving – just a way for a writer to shirk other duties, such as taking out the garbage. (It works more often than you’d think!) But I really believe that a writer who takes his or her work seriously is never, so to speak, off duty.

That doesn’t mean writers actually think writing 24/7. When I’m poised over a three-foot putt, I’m not pondering anything but the excuse I will use when I miss:

I have included golf scenes in my thrillers, but my protagonists are typically capable golfers; that is to say, figments of my imagination. If I wrote about my missed three-footers, the book would be twice as long as War and Peace (and more tragic).

But other than when “relaxing” on a golf course, I am constantly on the lookout for characters, scenes, images, and situations to include in my books, either the one I am working on currently or future tomes. Since I am a strike-while-the-iron-is-hot writer, it is the rare new idea that isn’t immediately plugged into my latest effort.

Sometimes the idea merely enhances a particular scene and makes it more colorful. I alluded to just such a situation in a recent column, where I described how a photo cube in someone else’s novel morphed into what I hope is a nice interlude in one of mine. But sometimes an idea needs a whole chapter to flesh out. Unless it’s an earth-shattering realization that deserves a book of its own, better to use it in your current book – even if it means a lot of extra work – than let it go stale.

Ideas come to me in the bathroom (the shower, of course!), when I’m jogging (read: walking), when watching a movie, and in that twilight just before sleep. I keep my iPhone by my bed to send myself an email that will remind me what I just thought about. The iPhone comes in handy outdoors, as well; less so in the shower. I’ve run dripping to my computer to write down a scene, a phrase, even a word that intrigues me.

I have to go. My wife wants me to take out the garbage. But it’s a long walk to the dumpster. Maybe I’ll think of something I can use in a book!

Should a book’s name and cover art matter so much?