Or, all aboard The Polar Express. 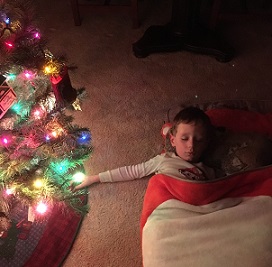 Today is our son’s eighth birthday — hooray! — and this week brings his favorite holiday, too.

Dash loves everything Christmas: putting up the tree, crowding the house with decorations, counting down the Advent calendar — Harry Potter this year! We camp out by the Christmas tree some nights. And then there’s Christmas music, Christmas movies, Christmas books, Christmas presents (of course!), and, at the center of it all, the magic of Santa Claus.

This year, however, we’ve found ourselves in new territory.

You’ve probably already added up the elements here ahead of me. An 8-year-old + Christmas = the sudden truth about Santa.

Dash’s suspicions aren’t entirely new. With age comes critical thinking, and over the last couple of years, he’s tested the ice with questions: How does Santa deliver all those gifts in one night? How does someone that big fit down the chimney? What does he do at houses that don’t have chimneys?

This year, critical thinking joined with crowdsourcing. Too many kids at school and on the bus have already made this rite of passage — if a little bumpily, in some cases. What prompted Dash’s questions a couple of weeks ago was something his best friend told him: “The reason our parents give us presents now is because Santa died.”

And Dash upped the ante himself when he turned his own questions our way, wagging his toothbrush at us one night and telling us point-blank, “If you lie to me, I’m gonna be really mad.”

My wife, Tara, and I looked at one another — questioning, helpless, hopeless — and then I took a deep breath and pushed ahead.

No, there is no fat man in a red suit traveling the world, sack on back, popping down chimneys (and not because he died). But, yes, Santa is real.

Santa is a spirit of sorts, I told him — a spirit of love and generosity and happiness — and when his mom and I play Santa, it’s really us inspired by all those emotions and desires, by the spirit of goodness in the world, or the faith and hope in that goodness.

At least, I think that’s what I said.

I can’t remember all of it. Along the way, I was leaning heavily on distant memories of the Sun’s famous “Yes, Virginia” letter, and then — always cite your sources, kids! — I actually pulled the letter up on my phone and read it aloud: “The most real things in the world are those that neither children nor men can see.”

I used that word magic again, too: the magic of love and of family. And I went further with the idea of magic, talking about the unexpected things that sometimes happen: like the sudden warm day just before Christmas last year; how we all went bike riding; how we realized that day that Dash had outgrown his bike; how I called REI on the sly as soon as we got home; how they had just one left of the perfect blue bike; how Dash himself never saw it in the back of the Toyota, just inches from where he was sitting.

A new bike appearing in the living room Christmas morning — could there be anything more magical?

And a year later?

Well, here’s another thing about being 8: You’re young enough to cry when you learn about Santa, but old enough that you want to hide your face as you fight back those tears.

Among Dash’s favorite Christmas books is The Polar Express, and in his author’s note, Chris Van Allsburg talks about being 8 himself and beginning to question Santa:

“Embracing this suspicion made me feel very grown up, very suddenly and very unhappily. Leaving behind a belief in Santa meant I would never again experience the enchantment that accompanied the days leading up to Christmas. The exquisite, almost unbearable anticipation of a fairy tale coming to life, a fairy tale that included me, would be gone forever.”

Dash wouldn’t have expressed it that way — he doesn’t have those words yet — but I think that’s what he was feeling, tucking his head away from us. And even though Tara told me later that she was impressed with how I explained it all to Dash, I felt like my own words were, at best, fumbling toward some mark that stayed just out of reach.

It’s the power of good writing that Van Allsburg’s note brought things into focus for me, and that re-reading The Polar Express might help restore something fundamental and necessary, too.

And so we’ll read that book again this year — along with Santa Calls by William Joyce, Penguin’s Christmas Wish by Salina Yoon, and others among a couple dozen favorites — sitting in the glow of the Christmas tree. We’ll wait for the magic on the page to fill the air.

And we’ll trust, as Van Allsburg promises, that the magic is indeed still there “for all who truly believe.”

So much to be grateful for, so little space to list it all...

Adjusting to our new normal, one book at a time.