The bookish merits of a “slept-on” city. 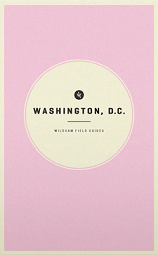 Among travel literature, few habits inform the notion of being a “tourist in your hometown” like reading a guidebook to the place where you live. In February, Wildsam, a travel-guide brand for the Instagram age, published a companion for visiting the nation’s capital.

Between the edition’s petal-pink covers lies a respectable survey of Washington’s full range, a composite essay — a “try,” in Montaigne’s sense — meant to discern the nature and literature of the city. Unlike most of my (obsessive) guidebook reading, assessing Wildsam’s guide was for me hardly objective. I was born here. I live here. This was personal.

Wildsam’s take on DC literature is robust but not without blemish. Edward P. Jones — despite his Pulitzer Prize — earns a single, pithy reference as the author of the DC-set story collection Lost in the City. No mention is made of National Book Award winner Denis Johnson, whose writing on growing up and doing drugs around DC has been celebrated elsewhere.

Wildsam does better when it interviews some of Washington’s contemporary writers: Jason Reynolds, bestselling young adult novelist and Ambassador for Young People’s Literature at the Library of Congress, and George Pelecanos, whose crime writing has come to us through bestsellers and award-winning TV shows like “The Wire.”

I’ll also credit the guide with leading me to discover a handful of writers with whom I was unfamiliar, like Quique Avilés, the Salvadorean-born poet and dramatist who laments DC gentrification and pressures on the poor; or Sandra Beasley, whose poetry has interrogated the fraught racial history of the city’s historic monuments. (We’ll return to the DC-monument theme — their race-infused essence, and one of the guidebook’s critical failures — in a moment.)

An older strain of literary significance runs from a line in the book’s interview with Reynolds. “There is no Harlem Renaissance if not for DC,” he says. “They all were in DC before they moved to Harlem.” That’s saying something, from one who would know — Reynolds is a Black author, culture hound, and champion of the inimitable DC dance music, go-go. (“The Blackest music in the world...the Blackest music ever to be created,” he called it. And that’s saying something, too.)

Reynolds’ view on the Harlem Renaissance — once partly Washingtonian, now global — suggests that the capital’s place in creating and supporting literary output is anything but appreciated. He argues as much for DC writing and DC in general. “It’s a slept-on city still, in so many ways,” he says.

Langston Hughes, one of the Harlem Renaissance’s leading lights and a onetime DC resident, would find early appreciation from Mary McLeod Bethune, the famed educator and civil rights leader. Bethune urged the young Hughes to tour the American South, reading poetry at Black schools; his travels would cement his reputation as a radical, brilliant scion of the “New Negro” concept developed by Alain Locke. A philosopher, writer, and spiritual father of the Renaissance, Locke was a longtime professor at DC’s own Howard University.

Where Wildsam misses the mark, among other places, is in its back-of-book essay by Alexis Coe, “What Is to Be Done About the Washington Monument?” Coe, despite her U.S.-history bona fides, falls back on the tropes of Washington-focused cultural studies: that the Jefferson Memorial lionizes an enslaver, and that the Capitol was constructed by Black forced labor.

These are facts, and no less damnable because they happened a long time ago. But they do roughen the road to a holistic understanding of DC’s public symbols. Coe calls the National Mall, where the Washington Monument is found, an “intellectual Disneyland,” rich in stimulation for historical musing. Later, with too little research, she takes aim at another monument, far older than the Harlem Renaissance or its DC-connected writers, some 10 blocks from the the slave-built Capitol, in a green space called Lincoln Park.

There, a bronze statue of Abraham Lincoln, standing by a crouching, barefoot slave, was installed in 1876. Frederick Douglass, the writer-activist and former slave himself, spoke at its dedication. Douglass later criticized the work, and on this criticism, Coe has myopically set her focus.

“What I want to see before I die,” Douglass wrote, “is a monument representing the negro, not couchant on his knees like a four-footed animal, but erect on his feet like a man.” Douglass continues, with prescience: “There is room in Lincoln Park for another monument, and I throw out this suggestion to the end that it may be taken up and acted upon.”

Coe hastens to an alarming and false conclusion: “That never happened, but that doesn’t mean it shouldn’t.”

Actually, it did happen. In 1974, the legacy of Bethune’s contributions to racial progress took form in a statue to the woman and her intellectual fruit, as symbolized by a Black boy and girl gathered attentively near her maternal frame. Bethune’s likeness would have done Douglass proud, for she stands erect like a woman.

Radically, at the time of the latter statue’s installation, Lincoln and the slave were turned 180 degrees from their original position — not to look west toward the Capitol, but to greet Bethune’s memory and all the children in her train. Inscriptions at the Bethune statue’s base further suggest a different literary bent of the contributions she and others made in Washington and beyond. “Let her works praise her,” one inscription reads, a reference to the ideal woman of God as extolled in the Book of Proverbs.

Wildsam’s field guide to the nation’s capital is not dismissible for its flaws. On the contrary, the volume succeeds with its intelligence, breadth, and Instagram-selfie potential. For Washington’s literary core, the book starts with the modern and moves back through history to Hughes, Bethune, Douglass, and the ancient Judeo-Christian values that underlaid the cause of racial advancement and the moral authority thereof.

These, too, are slept-on notions, to use Reynolds’ phrase. I learned a lot from the guidebook, and I’m grateful. If Wildsam’s new title helps travelers wake up to Washington’s richness — literary or otherwise — all the better.

William Fleeson is a writer and former business journalist based in his native Washington, DC. His writing has appeared in the Hill, National Geographic, Newsweek, and many other publications. He was a finalist for the 2020 New Millennium Writing Award.

Don’t miss out on conference savings!

But *How* Do You Write a Killer Book Proposal?