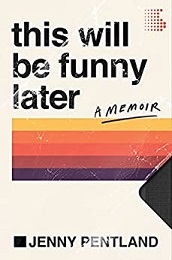 I wanted to write about love for Valentine’s Day. And although Jenny Pentland’s This Will Be Funny Later isn’t a romance, it is a story about both heart and heartbreak. In it, she shares the intimate account of how she struggled in the celebrity shadow of her mother, Roseanne Barr, but eventually outwitted her demons and learned to love herself.

“My life is a sitcom,” she writes at the beginning of the memoir. Although the Pentlands were a normal middle-class family living in Colorado when Roseanne first discovered her talent as a comedian, her career soon took off and landed her a hit sitcom. Jenny’s tween and teen years played out on television in “Roseanne.”

She recounts how the show drew its content from true events in the Pentlands’ life. But Jenny and sister Jessica’s TV counterparts “were lightweight, PG versions of us with no complicated backstories…They suffered no PTSD or mental illness in the form of anxiety disorders. Neither of them had been indoctrinated into a cult, OD’d, or spent a year or more in a private mental health facility.”

By the end of the series, the storyline “looked like a parallel-reality version of what would have happened to us had the show never existed.”

Once the family moved from Denver to L.A., they tried to maintain a normal life, but celebrity mania quickly took over. Roseanne and Bill (the kids’ dad and the inspiration for Dan Conner) understood that their kids needed more structure and shelter from Hollywood. They agreed to send them to private and/or boarding schools and “teen help” programs. At 10 years old, Jenny went to “fat camp” with 11-year-old Jessica and 7-year-old Jake.

As Jenny’s behavior deteriorated, her parents had her committed to multiple psychiatric hospitals and behavioral institutions, including an aggressive 52-day wilderness-survival program. Men she refers to as "bounty hunters" would magically appear in her bedroom, kidnapping her (per her parents’ instructions) and offloading her at the program du jour. Jenny became an expert at filling a pee cup and completing intake questionnaires.

“The main complaints against me were that I didn’t respect authority, and that I was fat. I was a mouthy fat little bitch, but I was not a fuckup,” she writes. People seemed to blame Jenny’s emotional issues on her weight, but even she knew “it was a symptom and not a cause.”

One day, at 15, during the survival program, she lay down in the dust to die. She thought she would “spend the rest of my life as the middleman in terrible family conflict, constantly disappointed and always disappointing.” As she resigned herself to death, Jenny was “happy and at peace for the first time in forever.” But an instructor foiled her plan by twice slapping the girl in the face to get her up. Jenny continued the program and finally graduated from the euphemistically named Aspen Achievement Academy.

The thought of growing up and getting out were the only things that kept her going. “Every second of suffering and every struggle was getting me a little closer, and my fantasies and plans for cake, sex, and babies were just enough to keep me wanting to live,” she writes.

“At midnight on May 28, 1994, the 10-year countdown to my eighteenth birthday, to my autonomy and freedom, came to an end…I was mine now.”

When she was 19 and weighed 280 pounds, Jenny had gastric bypass surgery. “I felt that this was my final option before just surrendering to being buried in a piano case after choking to death on a fried chicken bone.”

After the procedure, she was a new person. “The thing that most controlled me was a nonissue now and I could finally start my life.”

Jenny married in 1999 and fulfilled her dream of having children. In 2008, she fulfilled another dream by moving with her husband and four sons to rural Hawaii. “Just like people dream of coming to Hollywood to make it big…I dreamed of being invisible.”

One thing Jenny hadn’t anticipated was that writing her memoir allowed (and forced) her to analyze her PTSD. Although an emotionally daunting task, she now has the tools and coping mechanisms to better understand her agonizing journey to adulthood.

Today, when someone asks (as they inevitably do), “Which one are you, Becky or Darlene?” Jenny answers, “Neither.”

She is finally, proudly, herself.

The Road to Publishing Is Paved with…

You finish that sentence.