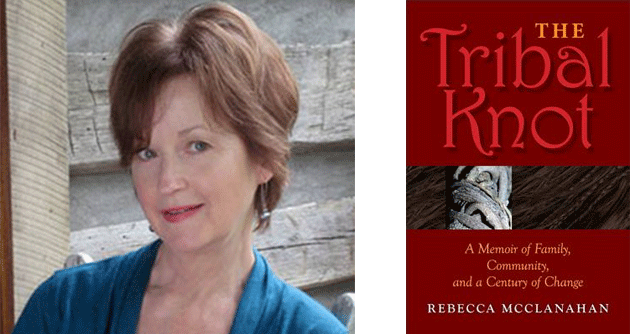 About The Tribal Knot

The book derives its title from a piece of Victorian hair art that, according to sources Rebecca McClanahan interviewed, wove strands of her maternal family members’ hair together and became pivotal in a family murder-suicide in the 1930s. Rebecca McClanahan never saw it and neither did any of her living relatives, and yet this odd piece of art is a great metaphor for this memoir, which weaves together a century of letters, artifacts and documents. What emerges is a rich tapestry of a hardworking Midwestern family with all their foibles, private triumphs and tragedies, public missteps and misfortunes. The Tribal Knot is not only a portrait of a family, but a portrait of a century as experienced in the Indiana and Wisconsin countryside.

The Tribal Knot is an intricate and carefully researched family history. Did you do all your research first or did you write a bit and then go back to find whatever pieces of research you needed?

First of all, I really didn’t plan to write the book; I’m an essayist and a poet. However, these family things landed in my life, and the more I got into them, the more I was sucked into these relatives’ lives, and I realized it was going to be a book. Once I had a critical mass of material, I started to see patterns, and I wrote a lot of guiding questions. I listed the things I knew, the things I didn’t know, what I hoped I would find, what I hoped I wouldn’t find, and pondered what I think is particularly important to memoirists: Why am I drawn to this material at this particular time in my life? Once I had the bigger parts of the story and found all these holes, small holes and big holes, I went back and did additional research. But you have to be careful, because research is a great way to avoid writing. You have to have some idea about what is missing, and what your purpose is, especially if you have a lot of material like I did. Otherwise your life will go by, and the sifting through the material will never end.

Indiana and Wisconsin are the central places in The Tribal Knot. Have you encountered the perception that a Midwestern book would not appeal to audiences on either coast, given the prevalent stereotype of the “boring” Midwest as a place to pass through?

There’s definitely this idea that Midwesterners don’t talk about things, and that there is a lack of emotion and passion. However, breaking down misconceptions is what literature is for. How many people have misconceptions about Canadians until they read Alice Munro’s stories?

Every memoir is anchored in place and time, but if you dig below that, you get the human heart. You get what Faulkner says is the only thing that matters in writing: the human heart in conflict with itself. And so it doesn’t matter whether you’re from Indiana, Wisconsin or L.A., you’re going to have those same conflicts.

For this reader, your great-aunt Bessie rose to the top as the main character. How did you arrive at centering the story around her?

I don’t consider Bessie as the main character; I consider the family unit as the main character through time. The reason Bessie became so important (because emotionally I am not as attached to her as I am to my grandmother, mother or sisters) is that first of all, she lived so long. She was the oldest person I knew; she was my living link to history. On a practical level, she allowed me to have a timeline.

On an emotional level, Bessie was the person who was most conflicted about what became the central issue of the book: Where does the family end and the individual begin? She was the most independent, willing to go out on her own, and yet she was connected and drawn back all the time. She was very different from my mother, for instance, who is a most connected person, and very different from some of the men, who didn’t have that struggle. They were off. They were gone. To me, Bessie was the one who, in the vehicle of her life, held those questions.

It’s hard to read your book and not feel like you lived every bit of it, which of course you didn’t. You do mention in your author’s note this issue of imagining people’s internal landscapes. How did you get there?

I did take that liberty, although I tried to give the reader triggers such as “opening the door to memory” or “I imagine.” Having read 75 years of Bessie’s letters, I was able to at least feel her thought landscape, the way one thought led to another. The same happened, for example, with Bessie’s mother Hattie and the run-on sentences in her letters in which the good and the bad smacked up against each other.

I also felt I could do this because I was working with very personal letters, which is of course a form of trespass since they were, in most cases, not sent to me. I was also touching these intimate artifacts, their shoes, their eyeglasses and so on. But I also knew many of these people in life, and there’s a lot of oral history in the book as well.

Entering the thought landscape was my attempt to connect the reader to my emotional landscape when I was reading the material. Working through all this family stuff was a life-changing event for me, particularly when I felt that I was now omniscient in some ways about these relatives’ lives. I knew much more than they knew at the time that they were writing these letters. I knew how long they would live, which child would die, which marriages would not last, so I felt very close to them, even to the people I never knew, like my great-grandfather Robert. I grew to love him. And I felt that without suggesting their inner landscape, the reader would not be as involved.

Did you have any feeling of debt to anybody? Did you feel any constraints about what you could share and what your family’s reaction would be?

Yes, I always have that. I always tread carefully when I write about family — these are people’s lives. A writer can’t go in with a sledgehammer and can’t go in with ulterior motives. I think what you need to look for is allegiance to the story as well as you can shape it. And if you’re a character in it, you have to shine the same bright light on yourself as you do on every character in the book. If you’re going to indict someone, or question something, you better be able to take that same heat yourself.

I’ve been writing and publishing things about family for 30 years, so my family is a little immune at this point. I am also very grateful and blessed to basically have an intact family without huge schisms in it. My mother and father read the manuscript, and they corrected some factual things. Reading it also let them have their emotional catharsis before the book came out. I don’t take this lightly, but then again, I also have to tell my story in the best way that I can.

I did have a great feeling of constraint with the middle of the book, the Klan section. I worked on those two chapters about the KKK involvement longer than any of the other chapters. I wanted to make sure the reader would understand the cultural and historical background that fed into these people’s lives; they were wonderful people but they were also a product of their environment, as I am in my day. One of my sisters asked me whether I could just leave that part out because she has two Jewish daughters-in-law and she thought that it would hurt their feelings to know that someone in the family had been involved in something anti-Semitic. However, I felt that it was so much a part of those relatives’ life and culture at the time that I couldn’t leave it out. I just hope I did it in a way that, by the time that part of the book comes, the reader will see my ancestors and relatives in all of their selves, because that was the full truth of their lives.

What was the emotional cost as you were writing? Was there a different emotional experience for you in writing about things you lived through and things that were happening to other people?

My original plan was not to be present as a character in The Tribal Knot, but rather to act as historian or third-person narrator. That didn’t work as I got so involved with the characters, particularly when I found parallel events, such as Bessie’s loss of the baby and my miscarriage. Reentering the darkest times of your life is not easy. It definitely hurts to go back to any part of one’s life that is painful, but I believe that there is a great beauty in making a shape or design out of the bad thing that happened. I am not really into writing as catharsis, but I do think catharsis can come as an aftereffect.

Does your family now see you as the go-to person, the keeper of family history? Have you become the family historian?

I may have become that, and that’s too bad for historians, because I am definitely not a historian and the gaps are huge. I actually don’t have as many of the artifacts as other people in my family, my sister has more of the quilts for example, but I am the paper person. I have 29 nieces, nephews, great-nieces and great-nephews, and I don’t know all of their birthdays, but I know the birthdays of these dead people because I worked with the census records.

We all tend to have these boxes of family stuff. You have actually done something with all this stuff, which is something most of us never do. What prompted you to do that?

Well, I am a writer. I am looking for the story, the patterns and mostly the images, like the hair image. That just resonated for me because it was so powerful. I felt like Lily Tomlin in the old TV show where she’s a telephone operator and is always connecting people. That’s me, I look for the connections.

Did you discuss the making of the story with your family? Were they as interested in those patterns you found?

Now that The Tribal Knot is done, are you done with family history? Or are there other family stories that you weren’t able to tell yet?

There were many family stories that did not end up in the final draft (I cut 600 pages along the way). And there are many more than I haven’t written. I don’t know what the future holds for my writing; writing is a mysterious process. After more than 30 years of writing, I’ve learned that you should never say “done” and never say “never.” I’ll just have to wait and see.

An Interview with Rana Awdish

The physician/writer's own brush with death opened her eyes to patients' plights.