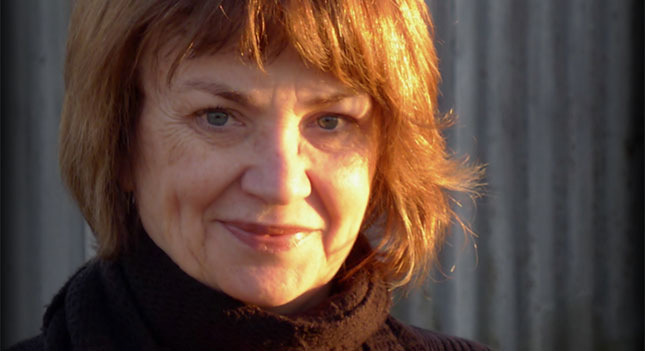 Kim Church’s debut novel, Byrd (Dzanc Books), tackles the issue of adoption from the viewpoint of a mother who gives up her child. It is woven together like a quilt from multiple points of view, narrative vignettes, and most uniquely, letters written to the adopted child. Byrd has already gotten some prepublication buzz on a few book blogs and has received praise from such literary luminaries as Jill McCorkle and Ron Rash.

Please describe your novel Byrd. What’s it about? Tantalize us!

Byrd is an adoption story told from the other side—the side of the birth parents and their families.

Addie Lockwood and Roland Rhodes grow up together in the fictional town of Carswell, N.C., in the 1970s. Addie is a reader and aspiring poet, Roland a blues guitar player. They find common ground in music and form a friendship that makes each of them feel, at least for a while, extraordinary.

Years later, in their disillusioned 30s, they meet again, this time in California, where Roland’s music career has landed him. Venice Beach is exotic, a world away from Addie’s cloistered life as a bookstore clerk. But when she becomes pregnant, reality sets in. Addie has never felt called to motherhood. As practical as she is romantic, she chooses to act on her own. She gives birth to a son and surrenders him for adoption without telling anyone, even Roland—and without imagining how the secret will shape her life or the lives of others.

Byrd is, at its heart, a story about making and living with the most difficult, intimate, and far-reaching of choices.

The novel has a unique structure. How did you come to the narrative technique you used?

Byrd is written in short chapters from different points of view, interspersed with Addie’s letters to her son. Originally I tried to write the entire book in first person from Addie’s point of view. I figured if Paula Spencer, the narrator of The Woman Who Walked Into Doors by Roddy Doyle, could deliver a first-person account of domestic abuse without sounding too much the victim, surely Addie could narrate her story of secretly surrendering a child. But Addie isn’t Paula Spencer and I’m not Roddy Doyle. Addie doesn’t know enough to tell her own story; she makes choices for reasons that aren’t always clear to her, and her choices have consequences she doesn’t always appreciate.

So, after spending years on that first draft, I abandoned it (gulp) and started over. I wrote from every point of view I could think of. And when I did, the story changed. Characters began to do unexpected things. They came to life—Addie especially. Her story became more complex and layered. The omniscient, shifting perspective also allowed me to look at how Addie’s choices played out in the lives of others. I was able, for instance, to trace Roland’s parallel life.

At the same time, Addie’s letters to Byrd allowed for the kind of intimacy I wanted when I started the book.

I pieced together letters and chapters as if I were piecing a quilt—a family quilt for the absent child—but without a pattern. I made up my own. I was inspired by the quilters of Gee’s Bend—women in a tiny, isolated, African-American farming community in Alabama who make abstract color-field quilts they design themselves. I saw an exhibit of these quilts at the Corcoran in 2004. They’re beautiful, unexpected, like no quilts you’ve ever seen. I love the way the women talk about them. Quilter Arlonzia Pettway says: “It was when my mother-in-law told me I didn’t have to follow nobody’s ideas that I learnt myself to follow my head.” And quilter Nettie Young says: “In the quilting bee time, I started using patterns, but I shouldn’t have did it. It broke the ideas I had in my head. I should have stayed with my own ideas.”

What are your writing rituals?

I go to my studio, a small room on the second floor of an old building where they used to make theater curtains.

I read a poem. Often I listen to music. Right now I’m listening to Keith Jarrett, “The Köln Concerts.” Sometimes I make a playlist.

Sometimes I burn incense: Kyo-nishiki (Autumn Leaves) for “reflection, inspiration, energy, and insight;” Kyo-zakura (Kyoto Cherry Blossoms) for “awareness, regeneration,” to be used after midnight or in early morning; Sho-un (Cloud Over Pine), “soothing and cheerful, for any activity that requires effort;” or my favorite, Haka-un (White Cloud), for “balance and perception; use any hour.”

When I hit a wall, I pick up my guitar. I wrote a few songs while not-writing this book.

How much research went into the novel?

Surprisingly, quite a bit. Keep in mind, this is my first novel. When I started, I worried that because I hadn’t gone through the experience of giving up a child myself, I wouldn’t be able to write Addie’s story with authority. Several friends put me in touch with birth parents who were willing to grant me interviews. I was struck by how differently these parents described their experiences; no two of them had the same response to giving up a child. This was helpful information. It gave me permission to use my imagination for Addie.

I did legal research and talked to a placement specialist about adoption procedures in North Carolina. I even sat through several legislative hearings on the issue of access to adoption records.

I had long talks with my sister about childbirth and motherhood. I talked to musicians about life on the road. I spent hours in secondhand bookstores, chatting up the clerks. I consulted an astrologer. It was his first (and still, I suspect, only) time reading charts for fictional characters. I learned from a local artist how to restore a mural. I learned from a classic car buff the available paint colors for the 1973 Plymouth Barracuda. I learned from my brother-in-law, a fire marshal, how a factory fire might start and spread.

I decided to set part of the book in Reno, a place I’d never been, so my husband and I traveled there. Reno was a complete surprise. I learned and saw things that I could never have gleaned from travel books.

You’ve been to several writers colonies. Did they help or hinder your process?

Without my residencies—particularly at VCCA, where I started and finished this book, and Vermont Studio Center, where I abandoned my first-person draft and started over—I might never have written a novel. I needed those stretches of uninterrupted time. I can’t carry a whole novel around in my head or lose myself in my characters if I’m also worried about my job, overdue library books, dental appointments, and what I’m going to make for dinner.

Do you consider yourself a Southern writer in the tradition of Flannery O’Connor, Eudora Welty, and William Faulkner?

Those writers are in my blood. So are writers like Joan Didion and Lydia Davis and Amy Hempel. What does that make me? I’m not consciously writing in the Southern tradition, but I’ve lived all my life here and I’m sure my Southernness seeps into my writing. I do try to create a sense of place in my work, most of which is set in the South. I write about a perennial Southern theme, family, though in an unconventional way.

My next book, a historical novel about cotton mill workers in 1920s Gastonia, will likely have a stronger Southern flavor because of its subject matter.

Thanks again for talking to us! I am looking forward to reading both novels.

Byrd hits the shelves (in print and digital form) on March 18.

Craig Laurance Gidney writes contemporary young adult and genre fiction. Recipient of the 1996 Susan C. Petrey Scholarship to the Clarion West writer’s workshop, he has published works in thefantasy/science fiction, gay, and young adult categories, and his first collection, Sea, Swallow Me and Other Stories, was nominated for the 2009 Lambda Literary Award. He is the author of the YA novel Bereft and the forthcoming collection Skin Deep Magic.