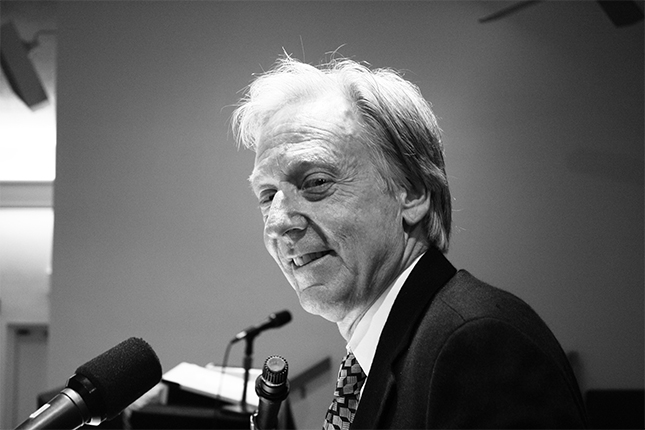 About The Lincoln Deception 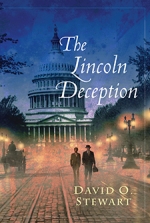 A new book about Lincoln isn’t usually news. Perhaps more than any
single subject (and almost certainly any single person), Lincoln has inspired a
very high stack of pages in the canon of American history. But respected
historian and Washington Independent Review of Books President David Stewart
takes a very different tack in his new novel, The Lincoln Deception. Drawing on an overlooked but true deathbed
confession by the lead prosecutor of John Wilkes Booths’ known (that’s a hint,
by the way) accomplices, Stewart has crafted a page-turning, entirely plausible
“discovery” of a Lincoln conspiracy whose complicated crimes could have
threatened “the survival of the republic.”

We swapped emails at the end of August.

Given your proven pedigree as a respected non-fiction writer, it’s not surprising that the historical research in The Lincoln Deception is strong. But I was just as impressed by some of your narrative asides. Quick example: A doctor leaves his horse outside the home of a patient in a grimy coal town. “Don’t let him eat the grass,” he says. Why? “The soot-covered growth could foul the animal’s digestion for days.” How did you uncover that kind of tiny fact that quietly bolsters the credibility of the novel?

Whenever the novel’s characters were going to end up in a setting that was unfamiliar to me — like life in a grimy coal town in 1900 — I did some heavy information-grazing on the Internet and in local libraries. I found that photos could be more use than textual entries, because they have an immediacy that can translate into the details that will make a difference. I also found that reading fiction that was written during the era was a help. It affords a sense of the speech patterns, attitudes and habits of mind of the people of that time and place. To help me with The Lincoln Deception, I read novels by Frank Norris, Upton Sinclair and Edith Wharton.

Following up on that, did your research process differ in this fictional work as opposed to your non-fiction works on Aaron Burr and President Andrew Johnson’s impeachment trial?

The biggest difference is that I didn’t have to keep detailed research notes since I didn’t have to document every assertion with an endnote. That reduced the organizational effort a lot. Also, when the historical record was uncertain on some key point, I could make it up!

That last point — the silences of history — created the itch that I was scratching in writing The Lincoln Deception. On his deathbed, John Bingham disclosed only that there was a terrible secret about the John Wilkes Booth Conspiracy; he then took that secret to his grave. Enter the novelist …

What inspired your pairing of two characters of such different backgrounds, a white small-town doctor and an African American former baseball player and aspiring newspaper publisher, to form the core “detectives” in the book? These aren’t two guys one would necessarily expect to hang around together in the early 1900s.

I had no choice about having the doctor as the lead protagonist. To remain true to what we know about Bingham’s deathbed disclosure, only the doctor heard it so I felt that only he would plausibly be motivated to investigate it. Adding a second investigator created a central relationship for the story, provided another person with different talents so the protagonist did not have to be a superman-type, and allowed me (and readers) to look at the world through a second pair of eyes. Others have made the same choice. Sherlock Holmes had Dr. Watson and Nero Wolfe had Archie Goodwin.

I modeled Speed Cook on a true-life figure, Moses Fleetwood Walker, who was the last black baseball player in the major leagues between the 1880s and Jackie Robinson. Walker was from the same part of eastern Ohio as John Bingham and my physician. My character, Speed Cook, is a fictional creation, but he has the anger and race-consciousness that any high-achieving black man would have had in America in 1900. Throwing him together with Dr. Jamie Fraser, a white man with little experience of black people, created conflicts (always good) and allowed me to explore race issues that have certainly not gone away.

Did you ever get stuck writing the narrative? Can you give an example of when this happened, if it did, and talk about how you got “unstuck”?

Happily, I can’t provide an example of getting stuck, largely because I followed a practice described to me by a very experienced thriller writer (whose anonymity I will protect): I first prepared an extremely detailed outline of the entire story. It ran about 80 pages. Then I wrote the book from the outline. I departed from the outline whenever I felt like it. One entire chapter had not been planned in the outline. But it kept me focused and moving forward. I don’t understand it when some novelists say that they create their characters and then let their characters tell them the story. My characters, if they know the story, don’t share that information with me.

I loved your assessment of 1900s Washington, D.C., as a “placid” town lacking the “swagger” of Baltimore and the “self-confidence” of New York City. How would you assess the D.C. of today?

Washington is very different a century later. Now it’s a world city, with a vibrant community filled with people who care deeply about their world and the arts, and also love fun. We are blessed and cursed with this superstructure of hyper-ambitious political people from other places who come here to do important and fascinating things, and also to do atrocious and repellant things. It’s pretty damned interesting.

Also, Metro needs to get its act together really soon.

Most writers hate to talk about what they’re working on next, but I’ll ask anyway. Fiction, non-fiction? Who or what goes under your microscope next?

For the immediate future, I’ll be writing both fiction and non-fiction.

I’m coming to the end (I hope) of a non-fiction manuscript that examines James Madison and the five partnerships that framed his contributions to the American founding: with Alexander Hamilton, with George Washington, with Thomas Jefferson, with James Monroe and with Dolley. I think Madison is a terribly underappreciated figure, and I’m hoping this perspective on him will help illustrate his tremendous gifts and contributions. With luck, the book will come out in the second half of 2014.

When I wrap up Madison, I will take on installment number two in the adventures of Dr. James Fraser and Speed Cook, giving them fresh mysteries to unravel and challenges to surmount. I’m thinking they may end up in Paris in 1919, during the peace conference at the end of World War I. Stay tuned.

Michael Causey, past president of Washington Independent Writers and an occasional colleague of David Stewart’s, genuinely enjoyed The Lincoln Deception and would have admitted, with regret, if he had not.

Can a book be wickedly funny and sad enough to make you cry? How about both at the same time? Kevin Barry's Dark Lies the Island is a torrent!