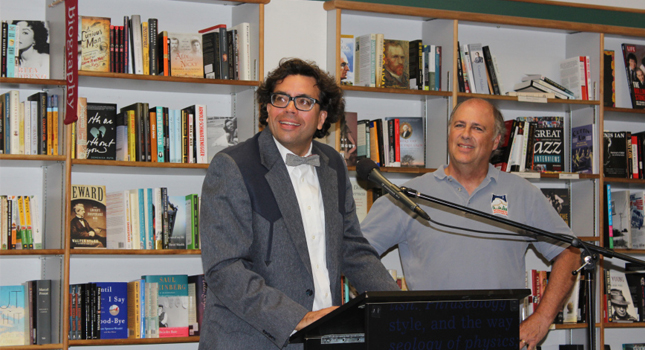 More than one reviewer has compared River Bend Chronicle: The Junkification of a Boyhood Idyll Amid The Curious Glory of Urban Iowa — Ben Miller’s dark and joyful recollection of his childhood in Davenport, Iowa during the 70s — to Moby-Dick, and with good reason. Miller’s detailed, frenetic prose and elliptically structured narrative push the genre into new literary territory.

Miller grew up as the eldest of six children in a household plagued by financial hardship and squalor, but not by ignorance: both of his parents held law degrees, but often struggled to make a living. Why these two highly intelligent people were doomed by mediocrity and failure is one of those questions that seem both unanswerable and self-evident. In one memorable passage, we learn that Mr. Miller routinely fulfills his legal obligation to store client papers by simply dumping them in a neglected corner of the backyard. Miller’s eccentric, sly mother occupies the dark, queasy center of the book. A frustrated intellectual, she often seems threatened by her eldest son’s attempts to pursue his own ambitions, subjecting him to guilt-inducing emotional manipulations which eventually escalate, horribly, to include sexual overtures.

For all the unhappiness and humiliation that young Ben is subjected to, River Bend Chronicle is not a grim book. The oppressive misery of family and school are countered by the ecstatic, Whitmanesque joy Ben finds in the odd, overlooked interstices of ordinary life, and much of the book — as its unwieldy subtitle suggests — is a powerful evocation of Davenport in the 1970s.

Ben and I met this July in the sweltering backyard garden of d.b.a — a long-established East Village watering hole — where we spent a leisurely hour discussing River Bend Chronicle over pints of brown ale. Below, excerpts from that conversation.

My understanding is that some sections of River Bend Chronicle were originally published as standalone essays. Can you tell me something about the book’s genesis?

The book was really created in waves or layers. In 2001, I began generating a lot of paragraph- or page-length sketches of people who had just never left my memory: relatives, friends, neighbors. That process took about two years. After that, I tried to begin lengthening some of those paragraphs, and since I had all of these little pieces laying on a table, I could reach for different ones as I needed to and certain ones started to attach to each other, and that really gave me the first finished piece in the book, “Bix and Flannery,” published in 2003, I think, in Raritan. That was the first element of the book published and it consisted of three blocks of text that were maybe two-and-a-half to three pages long. I got one done, and then I just started working from there.

You’re a writer with an unmistakable style. I suspect I could recognize an excerpt of your work even without attribution. While reading your work I thought of many different writers who are well-known for their style, so I’m curious —even though I know this is a bit of a taboo question — whether there are certain writers who you feel particularly influenced the development of your style.

I think of reading as a sort of tributary to your own writing. So you have your own flow of your own consciousness that is necessarily unique, and then there’s everything that flows into it. Your relationships. The media that you imbibe, and also your personal pattern of reading. There are just so many writers that mean a lot to me. Turgenev, in an interesting way, has always been a writer whom I’ve loved. Fathers and Sons, I mean there’s an obvious connection there, especially for male writers. He was an important writer to Hemingway, and for many writers since. Ivan Bunin is another one. He was another Russian writer who wrote this incredible short story called “A Gentleman from San Francisco,” which is about a cruise ship and someone whose job it is to have pretend romances with the passengers. Eudora Welty has been a really important author to me, particularly her novel The Delta Wedding. There’s just so many … I mean, I just finished Charming Billy by Alice McDermott — which came out after I’d finished River Bend Chronicle. But just anybody who is able to use their prose as a prism to capture the refractions of reality and then imprint them on the page has my admiration. I think that any writer’s individual task is to find their own way to do that, and it’s an extremely personal process. Books cheer me on. They give me a feeling of company. I write in a room surrounded by books and I feel that they’re like a sacred circle that, you know, sort of protects the process and allows you the freedom to extend it.

Why “junkification” in the subtitle? Is that term meant to represent the sort of pop cultural influences or ephemera that you encounter as a child? I mean, you live in a world of Aerosmith and Cheese Doodles, but you also live in a world of your mother keeping poetry anthologies on the dashboard of the car.

Right, right. I think there’s definitely a sense of intense mess [laughs] that I really wanted to portray in the book. I mean, “mess” in a social sense, “mess” in a local sense — this thing of being from Iowa, and never seeing cows [laughs] — and then at the core, and most importantly, a mess in a family that is struggling under economic pressures and emotional difficulties. And over the top of the mess is that prototypical consumerism, the junk piling up in the household, this crust of toys and other cheap boughten things that just somehow typify, weirdly enough, what is deeply inside you, the emotional confusion and chaos, the cheapening of dreams — and in the end the absolute, almost complete trashing of dreams — that can occur in certain households that are suffering under a weight of grief. In the book, this sense of grief is somewhat mysterious. It was never quite clear what affected my mother and father but there were lots of hints that they had undergone trauma, certainly proved by the way that they behaved. So whatever happened to them created a grief and the pressure of that grief — as in a garbage compactor — scooped up so much from discount stores and pushed it all together into the house, and we children were in the middle of that. And the hope for us all was to go out to Kmart again, or to go to Woolworth’s again, and to try to get another new shiny little thing for under a dollar that would then almost immediately break and make you need to go out again and get another little thing that would break. All of those fragments compiled in the house, and most importantly, inside of each of us. So, you just have this sense in the book of wading through a landfill of a spirit, or a landfill of a consciousness, that has undergone prolonged pressure from the forces of grief.

You’ve mentioned the poverty of your family, at least during certain periods of your childhood. But it seems like there is a deeper gloom that hangs over your family that everyone, even your parents, constantly wants to escape. What do you think created this oppressive feeling?

Well, I think part of the sense of doom was the sense of mystery. [laughs] No one ever really spoke about what was causing them to be depressed — and I’m speaking about my parents — it was never really addressed openly and thoroughly. But there just these outflung hints, continually — hints of there being things that happened in the past, pre-dating the family, that were blowing through this new family with a relentless force. In my father’s case, there was a rumor that … his father, a doctor, had not set my father’s leg correctly when he broke his leg as a teenager; in other words, that he had been maimed by his father. That was just purported, it wasn’t proven, but my father certainly did feel like he was a crippled man. He had trouble walking for most of his life. In my mother’s case, she grew up extremely poor in Dixon, Ill. As the oldest child, I was often her confidante, and she would say things about her past that were very disturbing, that led me to have all sorts of speculations. Speculations about the fact that she may have been abducted — briefly — when she was very young. And other similar, horrible things. But again, there was no will to really explore the past in either of them, there was no energy. But because there was no exploration and no actual dealing with this … this horrible sense of mystery and tragedy was there for all of us children from the very beginning. And that was compounded by the economic struggles. There just seemed to be no freedom inside the household from darkness. And children, being children, want light — and so we each in our way tried to get out. But dragging behind us was this load of darkness and dread that I think marked all of us intensely and formed our lives.

Tell me about the photographs in the book.

The photographs! I’ve always loved Let Us Now Praise Famous Men by James Agee and Walker Evans — as well as the works of W.G. Sebald — that incorporate photographs in lyrical texts. Lyrical texts tend to be dense and propagate a sense of narrative that is not linear. You’re doing things a little differently when the prose is powered by an impressionistic impulse as opposed to a journalistic impulse. So the addition of photographs in my book, in the beginning, was a kind of connection to the whole style of creating images and letting the images take the chapters where they take chapters instead of overlaying some kind of iron-clad sense of narrative to them. After that initial, vague idea of having this combination, there came to be a much more clear idea, in my mind at least, about the photographs. If you could say one thing about the book, it is really about the shifting of light and dark in life, and how the light and the dark continually swirl together, and change, and illuminate things or hide things, and the whole sense of consciousness which is vital to the book. And because I was lucky enough to know [photographer] Robert Campagna, who has taken thousands of photographs of eastern Iowa over the last three decades, I had access to an immense archive of photographs in the Mississippi River Valley, right where I lived. So we used specially picked shots to create a whole other layer to the theme of light and dark in the book. The most abstract layer, actually. There are no captions to the photographs. They sit there for readers to make of what they will, to blend into their own sense of the narrative. You could read the 40 photographs as their own little book that tells a story that each reader’s imagination can fill out.

Tyler C. Gore, a native New Yorker, lives in Brooklyn and has taught at Brooklyn College, Hunter College, and for Gotham Writers Workshop. His fiction, reviews and essays have appeared in many journals, and he has been listed several times as a Notable Essayist by The Best American Essays annual anthology. He is the recipient of a Fulbright Scholarship for Creative Writing. He currently serves as editor and Art Director of Literal Latte, an online literary journal based in New York City.

Tom Glenn speaks with the author of Verdi's Shakespeare.