I Know It When I Read It

What makes a novel "literary"? 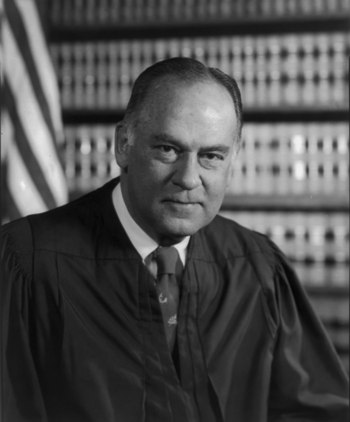 A recent New Yorker article on bestselling author Jennifer Weiner brought up two interesting questions. Is there sexism in literary culture (what Weiner cleverly calls Franzenfreude: “taking pain in the multiple and copious reviews being showered on Jonathan Franzen”)? And what, exactly, makes a novel literary?

In answer to the first question, cheeyeaah. Sexism permeates our culture, whether it be in entertainment, academia, or politics. The likely nomination of Hillary Rodham Clinton as our next president won’t eradicate sexism any more than the election of our first black president wiped out racism.

The second question is much more difficult to answer, though many minds better than mine have tackled it. After much pondering, I am forced to borrow, and mangle, the famous words of United States Supreme Court Justice Potter Stewart (pictured above): “I know it when I read it.” In his opinion in Jacobellis v. Ohio, a 1964 case that questioned the state’s ability to ban the Louis Malle film “The Lovers” for being obscene, Potter stated that he couldn’t define hardcore pornography, but, “I know it when I see it.” (“The Lovers” wasn’t it.)

It’s kind of the same for literary fiction. Novels are all composed of the same stuff: words strung together for more than 100 pages that, even if they’re based on real events, contain a good deal of the author’s creative invention.

So what’s the difference between something by, say, Jane Austen and Jennifer Weiner? They both write about women, usually quirky and more intelligent than almost everyone else around them, who endure a series of social embarrassments to make their own happy endings, which, of course, means they get the guy.

No one — except for rabble-rousers like Mark Twain, who wrote in a letter to W.D. Howells, “I could read [Poe’s] prose on salary, but not Jane’s. Jane is entirely impossible. It seems a great pity to me that they allowed her to die a natural death!” — would dispute that Jane Austen is literary fiction.

As for Jennifer Weiner, I am here neither to praise nor to bury her as a writer, as I have never read any of her books. (The article does make her seem like a very appealing person, though, a big-hearted feminist who takes pains to promote her sister girl-meets-world authors.)

Here’s my three-step, foolproof method for ascertaining if a novel is lowbrow: 1) If I read it while sipping my second or third glass of wine; 2) If I don’t mind finishing it in one day; and 3) If, after I’m done, I feel cheap and used.

Authors who fall into this category include Harold Robbins, Jackie Collins, V.C. Andrews, and Sidney Sheldon. (It’s been awhile since I’ve read those kinds of books.) More contentiously, Anne Tyler and Stephen King. Agatha Christie? I can check her off for #1 and #2, but never for #3. I have, in fact, re-read some of her books.