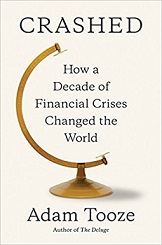 Recently, Professor Adam Tooze of Columbia University found himself faced with a small problem, one to make him the envy of many of his fellow authors. His latest book, Crashed: How a Decade of Financial Crises Changed the World, came out August 7th, the publication timed to coincide with the 10th anniversary of the global financial crisis.

Adam’s particular expertise is in modern global economics, and he is widely acknowledged to be just the guy to write this definitive analysis. (His previous books include The Wages of Destruction: The Making and Breaking of the Nazi Economy and The Deluge: The Great War, America, and the Remaking of the Global Order, 1916-1931.)

The issue? He was besieged by requests for TV interviews and had nothing appropriate to wear. Time to shop for a few new suits. Ah, we should all have such problems — and he was certainly not complaining.

I heard this anecdote from my friend (and Adam’s fiancée) Dana Conley at the start of an overseas trip that Dana had planned for a small group of us. We were lucky enough to pull Adam off his book tour to join us for a few days, but he had to bail early to get back for the start of classes at Columbia — and to tape a few more interviews.

In the meantime, though, it was somehow reassuring to talk to the guy who could speak calmly and authoritatively about the economic forces that helped shape our current chapter in the American story.

After what has been an especially challenging summer, I was looking forward to this trip, in no small part to get away from the increasing insanity of U.S. politics and my worrisome addiction to cable news. I was, however, fooling myself to think that I could get away from things completely; that one five-letter word — it starts with a “T” — sounds the same in virtually any language, and I heard it regularly in several.

Though I knew better than to bring Crashed with me on vacation, I did pack reading material as though I were going on a long, lazy beach vacation rather than an active adventure. I brought four books, which was wildly optimistic on my part.

The two physical ones I grabbed from my towering TBR pile: Fates and Furies by Lauren Groff (yes, I know I’m way behind) and The Night of the Flood, a novel in stories in which each chapter is written by a different contributor (a shout-out to the Independent’s own E.A. Aymar, who co-edited the collection and contributed a story).

On the e-book side, I had An American Marriage by Tayari Jones — one of the books on Barack Obama’s summer reading list, which I mention as a reminder of the time when we had a president who not only read books but talked about reading books and visited local independent DC bookstores to buy them — and Man Booker Prize-winning Lincoln in the Bardo by George Saunders.

I also took an informal poll to see what other folks had brought with them, and found an interesting mix:

Those of us who love books know that they are the easiest way to travel (virtually), but also that it’s impossible to travel (physically) without at least a few books. But physical travel, at least for me, is as much about the people and the culture as it is about the geography.

I’ve often wondered whether those who cling to an us-against-them xenophobia have simply never traveled, but I don’t think that’s it. Because wherever you go, there you are; you cannot leave yourself behind.

To be “of the world,” to be a traveler into a place rather than a tourist through it, requires a level of openness and curiosity that allows you to experience rather than judge. It’s something that traveling and reading have in common.

So far (I’m still on vacation as I write this — the only writing I will have accomplished in my time away, including any attempt at a travelogue), I have only finished Lincoln in the Bardo. It is a novel unlike any other I have ever read, and, I think, worthy of the attention it has received. (Plus, any reminder of the Civil War allows me to think, “See, things really could be a lot worse.”)

Two of my travel companions said they had listened to Lincoln as an audiobook. We all agreed that, given its unique structure and constantly shifting points of view, audio was not the best way to experience this particular story.

However, when I get home, I’m looking forward to consuming Crashed as an audiobook, while having the print edition as reference. This is exactly what I did with Deluge to great effect, as I noted in my 2016 reading wrap-up:

“The sweeping breadth and fully coherent depth of this book is staggering, and I found listening to the audiobook invaluable to my overall retention and comprehension of the material that Professor Tooze weaves together seamlessly. At the same time, I loved having the hardcover, which I used to re-read passages and chapters I had heard on DVD.”

Plus, as I make my way back into daily living, listening to Crashed will surely drown out the siren call of cable news. It will almost be like being on vacation.