Philip Roth turns 80 today, and despite his recent retirement from writing, he's more in the spotlight than ever. 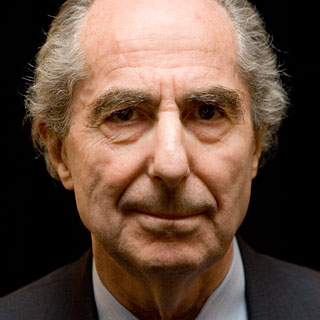 It was a big disappointment when Philip Roth, with no explanation, canceled his appearance at last year’s National Book Festival. Even before he announced his retirement from writing last fall, I had no illusions that the Festival would be one of my only opportunities to see and hear him in person.

Roth may now be retired, but he’s not out of the spotlight. There was the unfortunate incident wherein Julian Tepper, a debut author waiting tables in a Jewish deli, showed his novel to Roth while serving him breakfast. Roth, speaking of writing, advised, “Really, it’s an awful field. Just torture. Awful. You write and write, and you have to throw almost all of it away because it’s not any good. I would say just stop now. You don’t want to do this to yourself.”

Tepper recounted the incident for The Paris Review. Then Eat, Pray, Love author Elizabeth Gilbert got involved, defending the writing life (though — to editorialize — what Roth means by the writing life is likely quite different from what Gilbert means). Tepper, seemingly desperate to milk the incident for all it was worth, then penned an apology to Roth for starting the whole business.

Since then, there’s been a celebratory conference in Newark, bus tours of Roth’s hometown, two new volumes of his work issued by the Library of America, and a documentary film.

Roth has pulled off the dual achievement of being both a literary giant and a polarizing figure. Love him or hate him: it’s to his credit so few are indifferent. Is Roth proud of his Jewish heritage, or ashamed? Is he misogynistic or merely honest (if perhaps in a generational way)? Do his alternative selves, so prominent in his books, indicate narcissistic myopia or boundless empathy? Has turning so deeply inward given his work broad profundity or narrow irrelevance? Is it self-love or a striving for connection that primarily motivates many of his characters? And what about his pronouncements: on the writing life, on modern fiction, or the future of the novel?

There are a few Roth inventions that will never leave my mind, like Professor Silk’s composing an angry novel-length diatribe upon being accused of racism in The Human Stain, or the creepy “Just Folks” program in the alternative history The Plot Against America. And I’m a relative Roth novice, having never read — among others — The Breast or Portnoy’s Complaint.

Readers: what say you about this man on the occasion of his 80th birthday? Has he enlivened your reading, or do you avoid him? Has his influence on literature been good or ill? Do you have a favorite Roth book, scene, character? Were you saddened or delighted by his retirement? Let us know!