Every Book Tells a Story

What we lose when we clean house. 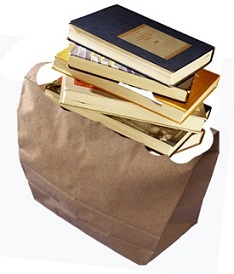 I started by making three piles: Save, Recycle, Sell.

Michelle Brafman, Karin Tanabe, and Howard Norman were no-brainers. They went into the keeper pile, joining Carolyn Parkhurst, David Shields, and William Burroughs, all books signed to me by the author.

Writers tend to know other writers and so, before long, that tower was Rapunzel-ian. Even the writers I didn't know personally — Joan Didion, David Sedaris, Mark and Jay Duplass — had, pen in hand, at least made eye contact.

But what about that well-intentioned lot unsigned, yes, but worthy? The biography of Charles Atlas, say? Or Curtis Sittenfeld's latest? Books that I planned on getting to but were now gathering dust on the bottom shelf? Should The Clash stay or should it go? Worried about hurt feelings, I apologized before deciding each one's fate.

"Please forgive me, Michael Chabon, for trying to earn a quick buck off of The Amazing Adventures of Kavalier & Clay."

"Would you mind, Gore Vidal, if I left you in the lobby?"

Moving is stressful enough, but the act of sending off my good friends — novels like Arcadia, which made me fall in love with words again, or The Corrections, which made me fall in love with dysfunctional families again — provided a crisis of conscience like no other. And yet, unless we live in Versailles, our home libraries are not static creatures. Some must leave to make room for others.

It wasn't all bad, though. After a while, my purging took on the emotional properties of a walk down memory lane. I rediscovered parts of myself in the same way that certain smells — White Shoulders, boiled cabbage — can wormhole a person back to their childhood.

In one hidden corner, I found Phyllis Krasilovsky's The Very Tall Little Girl, given to me by my mother when I was in third grade and towering over most of my classmates. "To another very tall little girl," my mother had inscribed on the title page. She's been gone six years now, but in reading her words, I am able to hear her voice again. How I loved being her daughter.

Then there were books that blew open my world. As an English major in college, I read a lot of dead British guys. But as a graduate student in writing, I encountered Tobias Wolff, Joseph Mitchell, and Susan Orlean. Reading Dave Eggers’ A Heartbreaking Work of Staggering Genius showed me what memoir could do — what I could do. These writers, kindred spirits all, came with me.

Eventually, I winnowed down my library into three 24x18x18 boxes and quite a few Kindle purchases. I bid farewell to a dog-eared Hemingway and added him to the tote bags earmarked for McKay's Used Books.

I pocketed $25 in cash along with a windfall in store credit. And, cue the groan, I'm ready for the next chapter.

The Song Remains the Same

…But it cures my writer’s block in endlessly different ways.