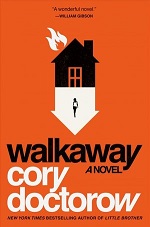 Much of the new science fiction seems intent on affirming that science is NOT fiction. Earlier generations of sci-fi writers envisioned what science could do for us if we used it properly, while the current generation is painting a harrowing picture of what will happen if we ignore science.

I went through what I considered a “childish” phase of science fiction at an early age, reading the canon of classic authors — Arthur C. Clarke, Ray Bradbury, Isaac Asimov, Andre Norton, Robert Heinlein, and the others (who admittedly had some dark visions of their own). Then I abandoned it for decades until lured back recently by the plethora of new science fiction.

There is a pronounced dystopian element to the new works, with mankind often reduced to primitive survival circumstances after an environmental catastrophe, a viral pandemic, or some other type of disaster.

The other novelty is that these books are unabashedly literary. If the literary thriller has long since become a recognized genre, it has to be acknowledged that many of the new visions of the future have nothing to do with the pulp fiction of previous sci-fi eras.

The New York Times Book Review, while it sometimes seems ponderous and cliquish, has been alert to this trend. Last month, it put Lidia Yuknavitch’s The Book of Joan, a global-warming dystopia, on its front page, and a week later carried a review of Borne by Jeff VanderMeer (who cliquishly wrote the glowing review of Yuknavitch’s book), a freakishly dystopian vision. Omar El Akkad’s American War, about a U.S. riven into a new civil war, gets the much-envied double header of reviews both in the Sunday supplement and the daily paper.

Two new books that see catastrophe in our future but nonetheless portray the resilience of humanity are Kim Stanley Robinson’s New York 2140 and Cory Doctorow’s Walkaway.

Robinson is an accomplished sci-fi writer, winner of numerous awards in the genre, and, for him, the flooding of lower Manhattan in the wake of climate change is simply the backdrop to turning New York into a Venice of sorts, with canals and skywalks and other adaptations to a life sunk in the water.

Some reviewers see in this new book a Robinson hallmark that they identify as the author’s aspirations, not for dystopia, but for utopia, though the chances of achieving it are slim. The point is to do something now to forestall the worst aspects of what is certain to come if we don’t act to create a better, more responsible society.

Walkaway is also hoping to find utopia, according to no less an authority than the author. In an article in Wired entitled “Disasters Don’t Have to End in Dystopia,” Doctorow seeks to show how his book about climate disaster, rampant inequality, and corporate dominance still has room for hope.

“Here’s how you can recognize a dystopia,” Doctorow writes in the article. “It’s a science fiction story in which disaster is followed by brutal, mindless violence.” Then he continues: “Here’s how you make a dystopia: Convince people that when disaster strikes, their neighbors are their enemies, not their mutual saviors and responsibilities.”

The question posed by the “walkaways,” who leave mainstream society but don’t suffer from scarcity because of technological advances, is whether our better instincts can overcome this selfish reaction.

“Stories of futures in which disaster strikes and we rise to the occasion are a vaccine against the virus of mistrust,” is the way Doctorow puts it.

At a time when political turbulence had made classic dystopias like 1984 and The Handmaid’s Tale bestsellers once again, it’s useful to have strong literary statements that even in the direst of circumstances, we still have choices.

Reveling in the Arcane