Death of a Gentleman

Over many years in Washington, DC, I worked with congressmen on their memoirs as lawyer/literary agent. Conservative – John Kasich – and liberal – Claude Pepper; Western Democrat – John Culver – and Eastern African American – James Clyburn. They were all interesting to work with, but none more so than Ed Brooke, a native of Washington, DC, who passed away Jan. 3rd.

He called me out of the blue. Someone, I don’t remember who, recommended we meet, and he invited my wife and me to dine with him and his charming wife, Anne, at his country home in Virginia. 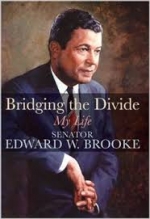 We met, talked politics and books all afternoon, and our professional and social friendship flourished. I did help him with his memoir, and we met socially years later when we each bought homes in and around Miami, where we celebrated the eventual publication of his book, Bridging the Divide: My Life.

Brooke, the first African American elected to the U.S. Senate — a Republican from Democratic Massachusetts, at that — was the personification of another time in Washington, a time when party officials worked with their political opposites (though not enemies) for the common good. Those days are over, sad to say, but thinking back on Ed Brooke’s era reminds one that there were better times and more profitable political experiences decades ago, before animosity filled the political bloodstream.

Brooke was a gentleman, a class-act public servant. I was his guest when he won the Presidential Medal of Freedom, and the ceremony in Congress was one of the most moving government proceedings I ever attended. There was bipartisan love and admiration in the room that morning, well deserved. Ed Brooke’s life and career truly bridged the divide.

Much of Maureen Dowd’s brilliance is missing from her latest book.

A Button Away from the Presidency

Recalling a funny memory from the late Marvin Watson