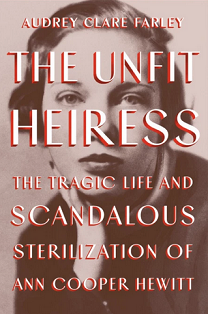 Living in an alternate reality between 2016 and 2021 caused me to fear that American social justice, and our democracy, was moving backward, not forward. But history is cyclical; we’ve been here before.

In years past, our nation participated in deplorable and shameful practices — the plundering of Indigenous people, slavery, internment camps, secret medical experiments on people of color, and systemic racism, among others.

America was also responsible for a “selective breeding” program, called eugenics, developed in the early 20th century. Believe it or not, Hitler used the American program as a blueprint for building his Aryan master race.

In The Unfit Heiress: The Tragic Life and Scandalous Sterilization of Ann Cooper Hewitt, author Audrey Clare Farley tells the story of the wealthy young Hewitt, whose socialite mother, Maryon, considered her daughter feebleminded, sexually devious, and unfit for motherhood. Under false pretenses, Maryon had Ann sterilized — without her consent — just before Ann’s 21st birthday. In 1936, Ann filed a lawsuit against her mother; subsequently, Maryon and the doctors who performed the procedure were charged with criminal mayhem.

Farley’s book not only illuminates Ann Cooper Hewitt’s tragic life but also explains the “selective breeding” practices which resulted in the permanent sterilization of tens of thousands of American women and men without their consent.

The creators of the eugenics movement believed that social conditions like poverty and promiscuity were inherited genetically. The goal of the movement was to ensure racial and social integrity by identifying and eliminating these undesirable traits and others, including intellectual disability, criminality, and hyper-breeding by lower-income, non-white people.

In 1928, Paul Popenoe and Ezra Gosney established the Human Betterment Foundation in California to promote involuntary sterilization of those determined to have weak genes. And as late as the 1960s and 70s, the director of the American Eugenics Society believed that “poor people were responsible for depleting natural resources and degrading the environment, as a result of their unchecked fertility.”

Farley explains what led her to research Ann Cooper Hewitt and the American eugenics movement.

“After my daughter was diagnosed with Type 1 diabetes, I researched the history of insulin. I read that, although insulin was discovered during the high-water mark of the eugenics era, they did not aggressively target diabetics for forced sterilization. This perplexed me, and I had to understand why,” she says.

“I dove down a rabbit hole reading about eugenics, learning that leaders of the so-called ‘racial betterment movement’ perceived certain diseases and traits to be more dangerous than others. 'Feebleminded' individuals — those with intellectual disability or loose morals — particularly concerned authorities, in part because these individuals seemed likely to mix with other races. Ann was deemed dangerous on these grounds and then operated on. The circumstances of her story fascinated me."

Of course, every story needs an audience. After she started researching, Farley saw a call for science-based pitches at Narratively — human stories, boldly told — and pitched Ann’s story. Farley explains that “Narratively’s content is wonderfully dramatic and research-driven, so the outlet seemed perfect for this story.

“In 2019, within hours of the article going live, I had inquiries about representation. A reader connected me with my now-agent, who later sold the book to Grand Central. Some other readers of the Narratively article have reached out to interview me for podcasts or stories, especially in the wake of Britney Spears’ statement about her own forced sterilization. I am thrilled the piece has had such a wide reach and that it’s still gaining notice.”

Later, Farley published related articles about the legacy of eugenics in the Atlantic, Longreads, the Washington Post, the New Republic, and Marginalia Review of Books. She has some advice for other writers about how to use short-form articles to advance their own projects and careers.

“When a writer publishes with any outlet, they surrender certain rights, such as print, film, or other derivative rights. So, it is important not only to understand the terms of the publication agreement, but to weigh the risks and benefits. If the outlet has the readership and machinery to maximize your exposure, or if the outlet is so well regarded that a byline there will be a feather in the cap, then it may be worth it to sign away certain rights. But writers should be careful not to give away too much for the sake of publication.

“Sometimes, writers may also want to guard certain material until the book is published, in which case articles can be used to share broader research, build a following, or establish credentials on a topic. It all depends upon the writer’s situation and goals.”

The real story of Lizzie Borden